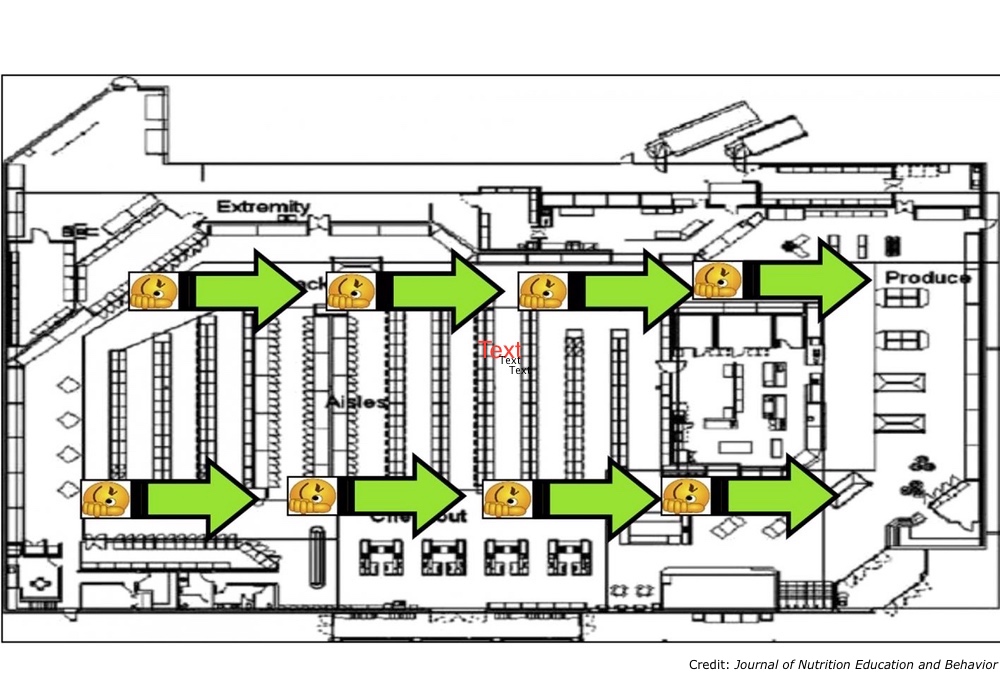 Fruits and veggies don’t get the marketing they deserve. With all the valuable nutrients and phytochemicals they provide that keep us healthy and fend off chronic disease, you would think they would get top billing in grocery stores.

Instead, stores put more emphasis on marketing less-than-healthy foods, so that’s where consumers tend to direct their food dollars.

Strategically placed reminders may be just the thing to get more people shopping the produce aisles instead of the processed food aisles.

But what would happen if produce were marketed as vigorously as less nutritious snack foods? Researchers tested this idea with a novel way to market produce in a pilot study.
ADVERTISEMENT
They had ten large green arrows placed on the floor of a grocery store that pointed the way to the produce department. Printed on the arrows were sayings like, “Follow green arrow for health,” along with graphics representing fruits and vegetables and emoticons (see graphic at the top of the page).

The study included a control store, one with no arrows. It was in the same chain and had shoppers with similar demographics and economic status as the store with the arrows.

After two weeks, there was an increase in spending on fruits and vegetables in the store with arrows, yet the total amount of money spent per consumer was no different between the two stores. The study was repeated at two more stores with different demographics and economic strata over a longer period of time, and the results were the same.

One of the most important findings was that people's food budgets weren't stressed by buying healthier foods. “Efforts to move shoppers to purchase healthier foods while not increasing budgets could trigger a public health shift, lead author Collin Payne, of New Mexico State University, said. “And our intervention showed that the produce spending proportion increase is possible without increasing overall spending per shopper transaction.”

Future studies are needed to determine how long this type of nutrition intervention is likely to be effective with shoppers, though the study suggests that strategically placed reminders may be just the thing to get more people shopping the produce aisles instead of the processed food aisles.

ADVERTISEMENT
Perhaps all consumers need is a little push to get them to follow the yellow brick road.