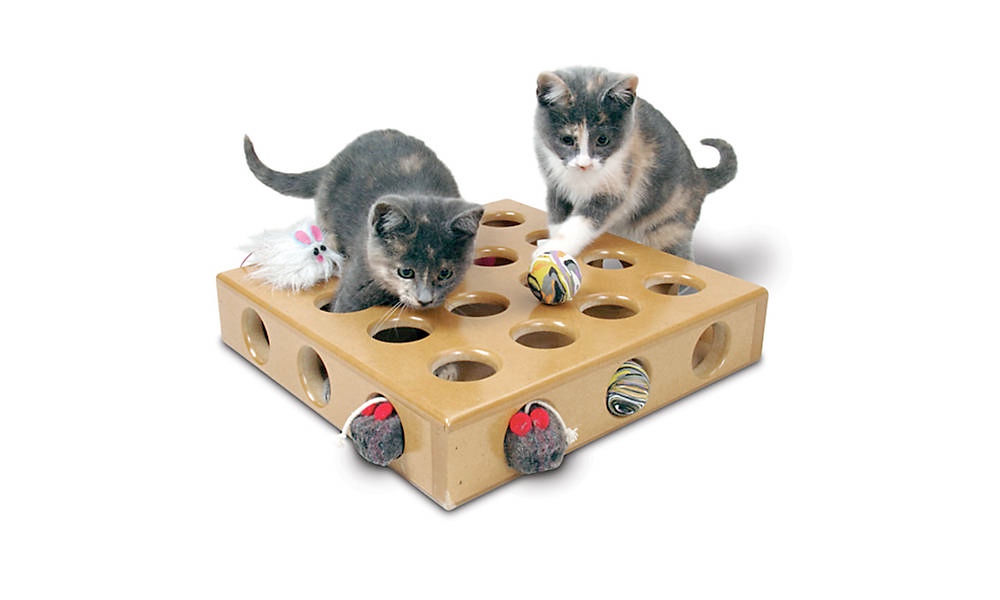 Neil Wagner
House cats still have a bit of the jungle in them. It's important to feed them with that in mind.

A group of veterinary professionals wants people to change the way that they feed their cats. They're calling for smaller, more frequent meals, preferably meals that take advantage of a cat's natural hunting instincts. The idea is that this should lead to trimmer and possibly saner house cats. It should also help the people who live with cats keep their sanity.

Anyone who's been around cats realizes that they still have a bit of the jungle inside of them — some more than others. And while no one wants a tiger on their hands, Many of cats' wilder instincts remain intact, even after neutering. That's where food puzzles come in — they make cats work for their food, just like they had to when they were hunters.

Food puzzles are devices that have food hidden inside of them. They come in all shapes and sizes and are made for varying cat IQs. Perhaps the simplest homemade puzzle is made from a roll of toilet paper's cardboard tube with its ends covered and a few small holes punched in the sides, so tiny pieces of food will come out when a cat rolls it around the floor. Food puzzles can help reduce the number of calories your cat takes in — something you should discuss the specifics of with your vet.

Anyone who's been around cats realizes that they still have a bit of the jungle inside of them. Most cats prefer to eat small, frequent meals alone.

Cats also need to be fed in a location that they feel safe in. This can be a challenge in multi-cat households, all of which have their own dynamic. A good guiding principle is that cats that don't get along should not be made to eat together. Remember how that worked out in your high school cafeteria?

The same holds true for their water dishes.

Most cats prefer to eat small, frequent meals alone. Just because two cats will eat together doesn't mean that they wouldn't be happier with separate feeding areas. Forcing a cat to eat near another cat that it normally avoids creates anxiety and stress, at a minimum. It is better to seek other arrangements.

“The cat’s daily food allowance should be split into multiple small meals and fed throughout the 24 [hour] period, using puzzle feeders when possible,” according to a statement issued by the American Association of Feline Practitioners (AAFP).

ADVERTISEMENT
If this is a big change for your cat or cats, start slowly and see how the cat responds to food puzzles. On a positive note, an earlier article describes how almost all cats, even slowpokes and cats with disabilities, take well to food puzzles, given sufficient time.

The open access article offers more details, links to pamphlets, and pictures of puzzle feeders in action. It appears in the Journal of Feline Medicine and Surgery.