The Other Brain: From Dementia to Schizophrenia, How New Discoveries About the Brain Are Revolutionizing Medicine and Science 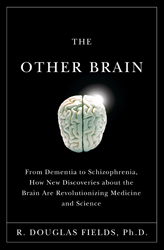 Editor's Note:
Our understanding of the brain is being profoundly challenged and changed by the discovery that cells other than neurons play an active role in brain functions. These cells, called glia, make up 85 percent of the brain and communicate without electrical impulses. They make up another brain, one that works independently, but cooperatively with the neuronal brain we are familiar with.

In The Other Brain: From Dementia to Schizophrenia, How New Discoveries About the Brain Are Revolutionizing Medicine and Science, R. Douglas Fields, Ph.D., a neuroscientist at the forefront of research on these long-overlooked cells, discusses how glia may cause and prevent disease as well as help the brain repair itself and the spinal cord after injury.

Glia had been viewed as merely housekeeping cells until the discovery that Albert Einstein's brain, examined thirty years after his death in an attempt to understand his genius, revealed that he had a typical number of neurons, but an extraordinary number of glia. Thus began a scientific adventure story that continues to this day. It is revolutionizing how we think about memory, emotions, drug and alcohol addiction, and consciousness.

The following excerpt is from Chapter 12, Aging: Glia Rage Against the Dying Light. In it Dr. Fields discusses how our new understanding of the four types of glial cells is expanding and shifting our understanding of the plaques and tangles known to build up in the brains of Alzheimer's patients.

Alzheimer’s: A Disease of Glia

Alzheimer’s disease destroys neurons and communication pathways in the brain. Certain parts of the brain are more vulnerable than others, notably those brain regions controlling thinking (cerebral cortex), memory (hippocampus), and fear, emotion, and aggression (amygdala). These are the main targets of Alzheimer’s disease. The disease afflicts 10 percent of us who reach the age of sixty-five. As average life spans increase through improved medicine, even more people will suffer from it. If you should reach the age of eighty-five, you will then have a fifty-fifty chance of acquiring Alzheimer’s disease. To put it another way, if both you and your spouse should survive to this ripe old age, one of you will probably suffer dementia or personality changes from Alzheimer’s disease. Age is the single greatest risk factor for this disease, which provides some intriguing biological insight into the disease mechanism.

The hallmark of Alzheimer’s disease is the senile plaques seen in brain tissue as first reported by Alzheimer in 1907 based on his examination of slices cut from Augustine Deter’s brain. These plaques are aggregates of material, beta-amyloid, that surround damaged neurons. But surrounding the plaques are large aggregates of microglia. Alzheimer himself saw and described these cells at these sites of brain damage. The plaques are also spots of intensive chronic inflammation of brain tissue. For this reason alone, it is to be expected that we should find these glial cells on the scene in abundance, but are they a part of the disease or just a response to it?

We are now beginning to realize that Alzheimer’s disease is a powerful example of what can happen to the brain and mind when the healthy interaction between neurons and glia goes awry.

The plaques are not seen in the brains of elderly people who do not suffer dementia, so the plaques are the result of disease, not a natural process of the aging brain. The second diagnostic feature of Alzheimer’s disease is that neurons are choked with tangled bundles of protein filaments inside their cell body known as neurofibrillary tangles.

ADVERTISEMENT
We are now beginning to realize that Alzheimer’s disease is a powerful example of what can happen to the brain and mind when the healthy interaction between neurons and glia goes awry. The neuronal damage in Alzheimer’s disease results from an attack on neurons by microglia and astrocytes that is linked to chronic, local brain inflammation. The excess beta-amyloid protein that forms the senile plaques in the brain of Alzheimer’s patients can be caused either by overproduction of the material or impaired clearance of beta-amyloid. Dysfunctional glia can contribute to the plaques in both ways. Microglia actively gorge themselves on the excess beta-amyloid, clearing it from the spaces between the neurons. This is the main reason why microglia are found in such abundance surrounding the senile plaques. However, under conditions of chronic inflammation, the ability of microglia to clear beta-amyloid from the brain is greatly diminished, so the toxic peptide accumulates more rapidly.

The excess beta-amyloid protein that forms the senile plaques in the brain of Alzheimer’s patients can be caused either by overproduction of the material or impaired clearance of beta-amyloid.

In addition, several neurotoxic factors are released from microglia when they are treated with beta-amyloid (the list includes reactive oxygen species, cytokines, chemokines, and others). Reactive astrocytes are also recruited to the amyloid deposits, and they probe their cellular fingers into the senile plaques to release enzymes that dissolve the beta-amyloid. Thus astrocytes aid microglia in clearing beta-amyloid from the brain.

The ability of astrocytes to protect neurons from damaging oxidation becomes impaired in astrocytes exposed to the beta-amyloid protein, which suppresses their ability to generate the powerful antioxidant glutathione discussed in chapter 5. At the same time, reactive astrocytes in Alzheimer’s disease release nitric oxide, a toxic component of smog, which at high concentration kills neurons by oxidative stress. The uptake of the neurotransmitter glutamate by astrocytes is also impaired in patients with Alzheimer’s disease. This not only degrades synaptic function, it allows glutamate to rise to toxic levels, killing neurons by overstimulation.

At the end of a life span, microglia and astrocytes may no longer be able to keep up their vigilant service to protect neurons. When these glial cells become weak, neurons die.

Another important function of astrocytes is to regulate blood flow to neurons according to their metabolic demands, but this function becomes impaired in Alzheimer’s disease. University of Rochester neuroscientist Maiken Nedergaard and colleagues determined this by watching calcium oscillations in astrocytes with a microscope focused through a hole made in the skull of a mouse under anesthesia. The researchers found that the normal dilation of microvessels in the brain cortex that is induced by stimulating brain function is greatly impaired in mice with Alzheimer’s disease. Touching the mouse’s whiskers increases the blood flow in the cerebral cortex where the whisker movements are analyzed. As explained earlier, this vascular regulation happens in part because astrocytes surrounding the microvessels communicate by calcium signals. But the calcium responses in astrocytes of animals with Alzheimer’s disease are impaired, undermining the ability of astrocytes surrounding microblood vessels to regulate blood flow, causing neuron death.

Even as they are participating unwittingly in the death of neurons in Alzheimer’s disease, astrocytes attempt to protect neurons from death by releasing growth factors. Brain-derived neurotrophic factor (BDNF) is produced in increasing quantities by astrocytes treated with betaamyloid, and this factor rescues neuronal cells from toxicity induced by beta-amyloid in cell culture. Unfortunately, astrocytes are also victims of this disease. Recent studies published in 2007 find that the betaamyloid peptide is also toxic for astrocytes in cell culture.

Chronic local brain inflammation around the plaques sets up the unhealthy environment that leads to changes in microglial and astrocyte responses in Alzheimer’s disease. Microglia together with astrocytes induce this inflammatory response by releasing inflammatory cytokines. Treating astrocytes and microglia with these inflammatory agents not only causes them to lose their ability to clear beta-amyloid, it forces them to begin releasing neurotoxic substances. Treatment with antiinflammatory drugs (such as ibuprofen) has been reported in some studies to decrease the risk of developing Alzheimer’s disease. The effects are only neuroprotective, however; the anti-inflammatory drugs are not therapeutic once a person has developed the disease and his or her brain has presumably suffered irreversible neuronal damage.

This association between chronic inflammation and Alzheimer’s disease may explain why age is the prime risk factor. Minor insults to the brain such as minor brain trauma, intoxicating drugs, and ischemia (impaired blood flow) accumulate over a life span. These conditions promote glial activation, which in turn promotes the release of inflammatory cytokines. When this situation is coupled with genetic risk factors, these small brain lesions may sow the seeds for Alzheimer’s disease. We must also recognize that as we age, our glial cells also age and become less robust. At the end of a life span, microglia and astrocytes may no longer be able to keep up their vigilant service to protect neurons. When these glial cells become weak, neurons die.

This is not the same Chlamydia bacterium that causes sexually transmitted disease (C.trachomatis). This is its cousin, C. pneumoniae, which may be responsible for more deaths in American than any other microbe. It causes pneumonia…

Excerpted from "The Other Brain: From Dementia to Schizophrenia, How New Discoveries about the Brain Are Revolutionizing Medicine and Science" by R. Douglas Fields. Copyright © 2009, reprinted with permission from Simon and Schuster.

MORE BOOKS WE LIKE
Diabetes Rising
The Secret Life of the Grown-Up Brain
The Checklist Manifesto: How to Get Things Right
LATEST NEWS