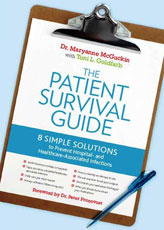 The Patient Survival Guide: 8 Simple Solutions to Prevent Hospital and Healthcare-Associated Infections is a must-read for people facing hospital-based medical procedures. Dr. Maryanne McGuckin, an international expert on infection prevention who has been a faculty member at the University of Pennsylvania Medical School, offers data on a risk few patients facing a hospital stay may think about: infection.

In hospitals, unfortunately, doctors and other healthcare workers and the equipment they use all carry bacteria that can cause even simple procedures to produce life-threatening infections.

The Patient Survival Guide describes what you can do to reduce your risk. Some of this potentially life-saving information is more accessible than you might think. Hospitals are required to report hospital-acquired infection rates. If you are facing a medical procedure, it pays to make sure you are heading to a facility with a low rate to reduce your risk of a hospital-acquired infection.

The following excerpts from two chapters describe the potential for healthcare-acquired infections and the dangers that lurk at your office, where lunch at your desk can be a field day for bacteria.

Susan M. had a very painful left knee. Her doctor said the problem was degenerative joint disease. He recommended a total knee replacement (in medical terms “arthroplasty”). No one likes to undergo surgery, but Susan was a healthy 64-year-old Black woman who didn’t smoke, wasn’t obese, and didn’t have diabetes or other medical problems that could make surgery risky. She decided to have the operation

As Susan expected, all of her pre-admission laboratory tests at the local hospital were normal, and fluid removed from her left knee showed no signs of infection. Her surgery was a success, with no complications. After 5 days of recovery in the hospital, Susan was transferred to a skilled nursing facility for physical therapy. She did so well that she was able to go home just 4 days later.

How could a healthy woman like Susan get so sick? Her surgery went well and so did her recovery.

A happy ending? Unfortunately not. Several days later, Susan’s left leg--the one with the new knee replacement--started to swell up. It soon got so painful that she went to the hospital’s Emergency Room. At first, doctors thought she had developed a blood clot in her leg, so they started treatment with anticoagulant medications (blood thinners). That didn’t help. But when they tested fluid removed from her swollen left knee, they found she had developed an extremely dangerous Staphylococcus aureus bacterial infection that wasn’t controlled by ordinary antibiotics. (You’ll learn more about MRSA, methicillin resistant Staphylococcus aureus infections, in the next chapter.)

To prevent the infection from spreading even further, Susan needed surgery to remove her new knee joint. In the weeks that followed, she developed many severe complications that required repeated hospitalizations, blood transfusions, and continuing treatment with powerful antibiotics.

How could a healthy woman like Susan get so sick? Her surgery went well and so did her recovery. She was fine when she got home, so you might guess that she did something then that caused her severe infection. In fact, Susan didn’t do anything wrong. Her hospital was to blame.

Like millions of other patients, Susan was exposed to infection-causing bacteria while she was in the hospital. As you read in Chapter 2, it takes time for bacteria to become colonized in the body. During this incubation period, people often seem perfectly healthy. But if the body’s infection-fighting cells can’t kill the invading bacteria, the infection continues to spread. Soon, the patient develops noticeable symptoms, such as pain and swelling. That’s what happened to Susan. During or soon after her surgery, dangerous Staphylococcus aureus bacteria got into her surgical incision, became colonized, and weren’t stopped by her immune system’s infection-fighting cells. Susan had developed a healthcare acquired infection.

What are healthcare acquired infections?

Acquired infections aren’t caused only by bacteria; virus and fungus infections are common, too. You can get any of these infections in many types of medical facilities, including intensive care units, the emergency room, ambulatory outpatient care clinics, same-day surgical centers, and long-term care facilities such as nursing homes and rehabilitation centers.

From Chapter 11
Germs at Work in Your Office
Adults should be careful about hand hygiene, too, especially at work. That’s because germs cause illness, and illness results in absenteeism, which is costly for employees and businesses. For example, statistics in the United Kingdom for 2009 through 2010 showed that over 28 million work days were lost overall that year (1.2 days per worker), of which over 23 million were due to work-related ill health.

Unclean hands. During the 1990s, when worldwide outbreaks of Swine flu were feared, health officials recognized that flu germs would be transmitted via people’s unclean hands. Therefore, they recommended installation of sanitizer dispensers in public places and office buildings. The public responded positively, but when the flu alert ended, sanitizer use decreased. Nevertheless, infection control experts wondered if continued promotion of sanitizers in the workplace would lead to fewer lost work days.

Research currently points in that direction. In one recent study, German researchers divided a large public administration building into two sections; hand sanitizers were installed in one section, but not in the other section. The result: people in the hand sanitizer section had fewer episodes of common colds, fever, and coughing, and they took fewer days off from work.

Does your workplace have sanitizer dispensers installed in office areas? What about in restrooms? If not, tell your boss those dispensers could save the company lots of money in lost work days. Of course, sanitizers won’t do much good if you don’t use them. You have to play an active role in protecting yourself from infections.

Germs on the menu. Do you eat lunch or snacks at your office desk? Well, here’s some information that could change your mind. According to a study by a University of Arizona microbiologist who collected bacteria samples in offices around the country, your office desk probably harbors 400 times more bacteria than your office bathroom toilet seat! Even a small area on your desk or phone can host over 10 million bacteria that could make you sick.

MORE BOOKS WE LIKE
Unaccountable: What Hospitals Won't Tell You
Willpower
The Mind's Eye
LATEST NEWS