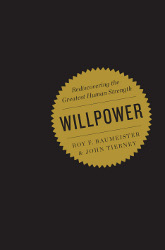 
The comedian Drew Carey once paid efficiency expert David Allen an untold, but very large, amount of money to help him deal with the emails, unpaid bills, to-do lists, unanswered letters and unfinished tasks cluttering his desk for an entire year. "I always felt out of control," Carey said. "I always knew I had stuff to do. You can't read a book and enjoy yourself because at the back of your mind you feel like, I should go through those e-mails I have. You're never really at rest."

What does your to-do list look like? Do you even have one? Or do you have the stressful, sinking sensation that you have so much to do that you don't know where to begin? Take heart. Just making a plan to do something, or not to do it, can lighten your psychic load considerably, according to social psychologist Roy Baumeister, Francis Eppes Professor at Florida State University and New York Times science reporter John Tierney in their book, Willpower, Rediscovering the Greatest Human Strength.

Baumeister and others' research on self control provides a thoughtful picture of a quality that forms the basis for most human achievement. Too often self control has been viewed as something one has or doesn't, but in fact, it's a characteristic that can be managed and developed and should be conserved. Having good habits helps save your willpower for things that really test your self-control; so does precommiting to a plan of action.

Willpower offers case studies of people like Eric Clapton and Esther Dyson, David Blaine and Eliot Spitzer to illustrate the pitfalls and triumphs of self-regulation and describes what Baumeister and others have discovered about why people often have trouble meeting their goals, despite the best intentions.

ADVERTISEMENT
The book serves up useful explanations for why dieting is so difficult (we need glucose to sustain our willpower); how willpower can be accessed to overcome addiction; how decisions can drain us of willpower; and how you can help your children cultivate their own willpower. It's one of those books that manages to be both grounded in science and highly practical.

The following excerpt shatters the myth that procrastination is the scourge of perfectionists and tells you how you can ignore its seductive call.

From the Conclusion:
The Future of Willpower – More Gain, Less Strain (As Long as You Don't Procrastinate)

In this closing chapter we’ll review the strategy for going on offense, starting with one of the most obvious yet widely ignored rules: Don’t keep putting it off. Procrastination is a universal vice... Researchers who have analyzed data from around the world say that over the past four decades, as economies have modernized and technological temptations have proliferated, there’s been a sharp increase in the ranks of dedicated ditherers — those who consider procrastination to be a defining personal characteristic. That category today includes more than 20 percent of the people surveyed internationally. In some American surveys, more than half the people consider themselves chronic procrastinators, and workers themselves estimate that they waste a quarter of their hours on the job — two hours per workday, which works out annually to $10,000 worth of slack time per person

This vice has often been blamed, by psychologists as well as ditherers, on people’s compulsion to do things perfectly. Supposedly these perfectionists are flooded with worry and anxiety whenever they try to start a project because they see it's not living up to their ideals, so they get bogged down or just stop working. This makes sense in theory, and doubtless it's true in some cases, but researchers have repeatedly failed to find a consistent link between procrastination and perfectionism. One reason psychologists were initially fooled into seeing a link might have been selection bias: a procrastinator with high standards would be likelier than a less ambitious ditherer to seek help for the problem, so perfectionists would show up more often in the offices of psychologists treating procrastinators. But there are plenty of other people with high standards who don’t procrastinate and do perfectly good work without pulling all-nighters.

When procrastinators are feeling anxious about a difficult job, or just bored by a mundane chore, they can’t resist the urge to do something else that will improve their mood.

ADVERTISEMENT
The trait that does seem to matter is impulsiveness, which shows up over and over in studies of procrastinators. This connection helps explain recent evidence that procrastination is more of a problem for men than for women, and especially for young men: they have less self-control over their impulses. When procrastinators are feeling anxious about a difficult job, or just bored by a mundane chore, they can’t resist the urge to do something else that will improve their mood. They go for the immediate reward, playing a video game instead of writing a term paper or cleaning the kitchen, and they try to ignore the long-term consequences. When thoughts of future deadlines intrude, they may even try telling themselves that it’s smart to wait until the last minute: I work best under deadline pressure! But mostly they’re kidding themselves...

[Further along in this chapter, after discussing how to know your limits and watch for symptoms that you have reached them and depleted your reserves of willpower, Baumeister and Tierney cover a series of strategies for preserving self control: how to pick your battles, make a to-do or to-don't list and the importance of keeping track of your progress (or lack thereof) and offer this piece of advice:]

When you set a goal, set a reward for reaching it – and then don't stiff yourself. If you just use willpower to deny yourself things, it becomes a grim, thankless form of defense. But when you use it to gain something, you can wring pleasure out of the dreariest tasks...As we saw in the chapter on parenting, the most successful strategies for promoting self-control involve rewards, whether they're being offered by British nannies, Asian-American mothers, or computer-game designers. Young people who seem hopelessly undisciplined in school or on the job will concentrate for hour after hour on games that involved the same skills needed for more productive work at the computer...

Online games became essentially the largest experiment ever conducted into motivational strategies. By getting instant feedback from millions of online players, the game designers learned precisely which incentives work: a mix of frequent small prizes with occasional big ones. Even when players lose a battle or make mistakes or die, they remain motivated because of the emphasis on rewards rather than punishment. Instead of feeling as if they've failed, the players think that they just haven't succeeded yet.

That's the feeling we should aim for in the real world, and we can do it by steadily rewarding ourselves for success along the way. Achieving a big goal, like quitting smoking for a year, deserves a big reward – at the very least, use the money you would have spent on cigarettes for some extraordinary indulgence... But it's just as important to have lots of little rewards for little feats... Esther Dyson likes to tell how, after years of failing to floss regularly, she finally hit on the proper incentive. As we mentioned earlier, she was quite disciplined in most other parts of her life, including forcing herself every day to do an hour of swimming. One evening she had an epiphany: "If I floss my teeth tonight, I'll let myself take five minutes off the swimming tomorrow. That was four years ago, and I've flossed just about every night since. It's incredibly silly but amazingly effective. Everybody needs to find their own little thing. It's got to be a reward that's relevant."