Unaccountable: What Hospitals Won't Tell You and How Transparency Can Revolutionize Health Care 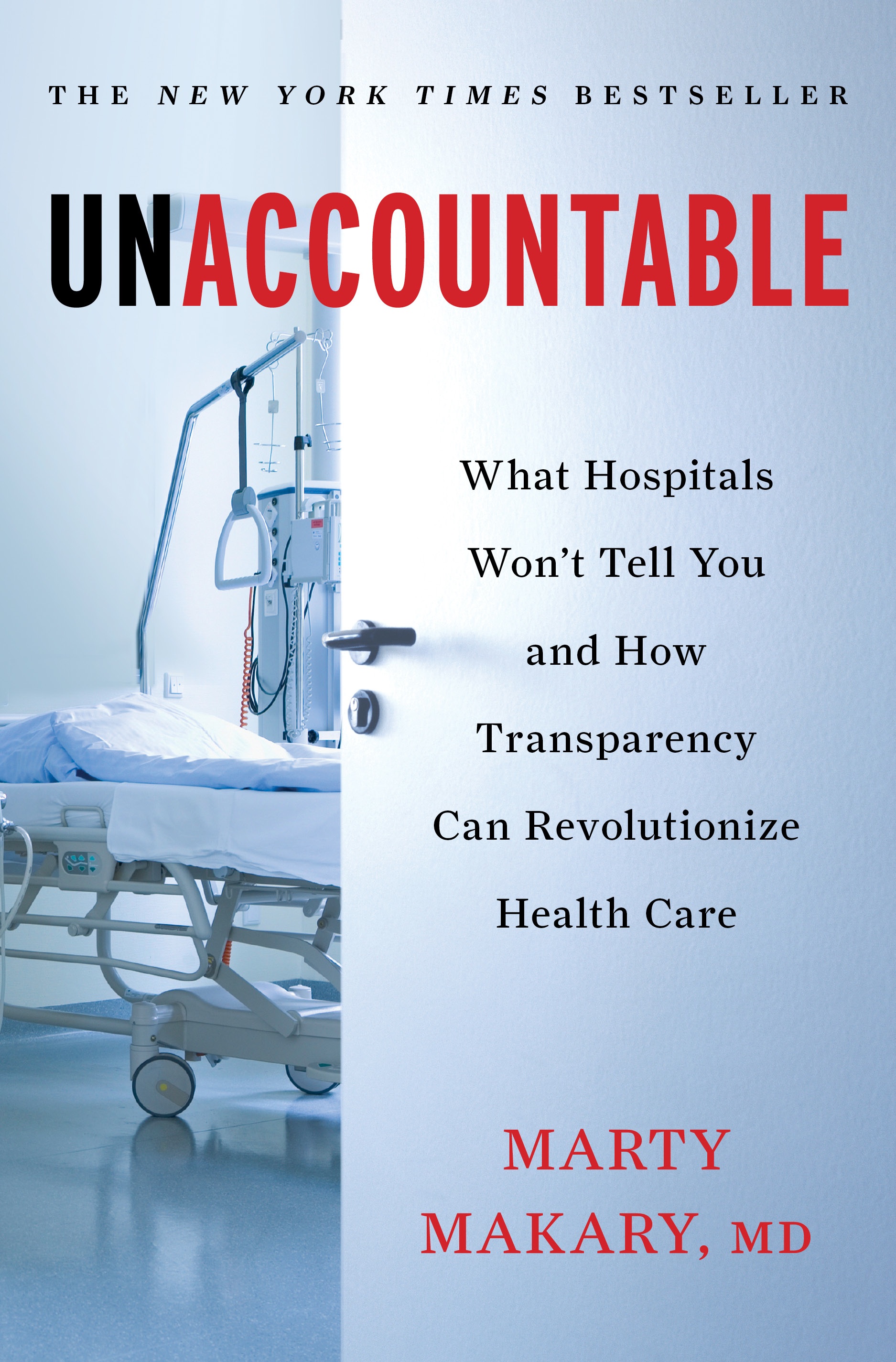 A Surgeon's Wake-Up Call for Patients and the Healthcare System


We've all heard healthcare horror stories — about doctors who operate on the wrong side, nurses who give the wrong meds or wrong dose, or patients who die from infections acquired in the hospital. But you might be surprised to learn that medical errors and unnecessary or over- treatment, are even more common than you think.

In Unaccountable: What Hospitals Won't Tell You and How Transparency Can Revolutionaize Health Care, Dr. Marty Makary, a surgeon at Johns Hopkins offers an insider's view of why these medical errors occur and what can be done about them. This is one of those books you will be glad to have read, even though you may wish you didn't know how many doctors recommend surgery when it's unnecessary or how often our labyrinthine healthcare system makes mistakes.

At a certain age, everyone should have a colonoscopy, right? Consider the following passage in which Makary describes two colonoscopies that have exactly the same findings, a small polyp, and completely different outcomes. When the time comes to schedule your colorectal cancer screening, you may want to discuss what your doctor plans to do if a polyp is found. — Leslie Carr
From Chapter 2
Danger Zones


A Tale of Two Polyps

As a surgical resident rotating through different hospital departments as a part of my curriculum, I trained with two doctors to learn how to do a colonoscopy. One was Dr. Cotman, a respected medical gastroenterologist. A well- known team player, he was very approachable and kindhearted. We nicknamed him the Rear Admiral— a name that made him laugh every time he heard it.

ADVERTISEMENT
One day, during a colonoscopy we performed together on a patient, Dr. Cotman and I discovered a golf- ball- sized polyp that appeared benign. While Dr. Cotman wasn’t very good at removing large polyps through the scope, he also had no shame in calling in another doctor who could do it safely. With the patient still asleep, a younger colleague from the room next door popped over and quickly lassoed the polyp with a wire snare passed through the scope— a device he jokingly called a nine iron. He took it out slick and fast— it was awesome. The patient woke up from his screening colonoscopy and was told that a large polyp was removed. The patient was elated.

Days later, I was assisting another doctor, Dr. Frederick, a respected colorectal surgeon, on an identical colonoscopy procedure. Just as with Dr. Cotman, this surgeon discovered a golf- ball- sized polyp. It looked so similar, it was almost as if it were the same patient. I asked the surgeon if he was going to remove it using the slick wire-snare technique. He replied, “I like to remove these in the operating room by taking out the colon,” referring to a separately scheduled open operation to remove half of the colon through a large abdominal incision.

What? I thought to myself. Why not just turn over the patient to the expert next door?

Remembering the last success I witnessed, surgery to remove the colon sounded like overkill to me. I told Dr. Frederick about how I’d seen a doctor remove a similar polyp with a snare and offered to call him. Dr. Frederick replied, “I just like to take these out with surgery.”

ADVERTISEMENT
It struck me that both the gastroenterologist and the surgeon approached the same problem totally differently, perhaps based on what they had been taught in their training. In doctor-speak, we would say that they had different “styles.” The only thing they had in common was that they reported to no one except their respective, information- deprived patients who, in good faith, trusted them. Everyone in the colonoscopy unit— nurses, anesthesiologists, technicians, me, and even the scheduler— knew this surgeon took disproportionately more screening- colonoscopy patients to surgery, whereas other doctors worked as a team to get the best doctor to remove polyps with a wire snare.

While nearly every employee knew this surgeon wasn’t a team player— and wasn’t really doing the right thing for many patients—their input didn’t matter. It also didn’t matter that every hospital employee respected Dr. Cotman because he knew his limits and listened to the input of his nurses— credentials that made him the go- to doctor if any staff member needed a colonoscopy.

To me, this was one of those moments that clarified how medicine was not a standardized science as I had envisioned it would be when I was a college student aspiring to be a doctor. The profession was much less omnicompetent or all- wise than I thought; instead it was largely unaccountable. What patients get can be determined by whether their doctor can summon enough humility to always do what’s in the patients’ best interest. To this day, I continue to see patients coming for a second opinion and am shocked by the radically different care they receive for the identical problem. (To this day, the gastroenterologist and surgeon described above— both widely sought after by patients— have thriving practices.)

Excerpted from Unaccountable: What Hospitals Won't Tell You and How Transparency Can Revolutionize Health Care. Copyright © 2012 by Marty Makary, MD. Reprinted by permission of Bloomsbury Publishing.
ADVERTISEMENT