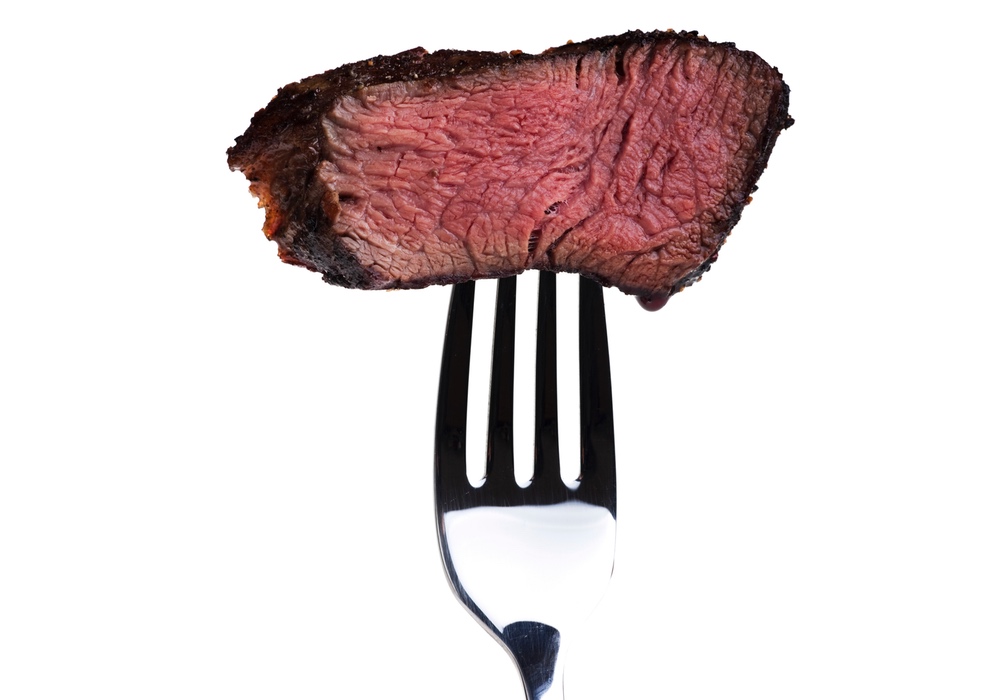 The Heart of a Meat Eater

Beth Fontenot, MS, RD, LDN
Eating meat raises your levels of a by-product of digestion that may be the missing link when it comes to red meat and heart disease.

The saturated fat in red meat has long been believed to be a factor in the development of heart disease, but it's not the only thing present in red meat that can cause problems. There is another culprit linking red meat to heart disease, a new study has found: trimethylamine N-oxide.

Bacteria in the intestinal tract produce trimethylamine N-oxide — TMAO — during digestion. It is derived partly from nutrients found in red meat; and several studies have shown a TMAO-heart disease connection, but little has been known about how typical dietary patterns affect the production or elimination of TMAO from the body.

When the people quit eating red meat and changed to either a white meat or non-meat diet, their levels of TMAO decreased.

Over 110 healthy men and women took part in a study to look at the effects of protein — red meat, white meat or non-meat sources — on TMAO production in the body. Everyone in the study ate a diet consisting of one of these three forms of protein for a month. Those on the red meat diet ate the equivalent of eight ounces of steak or two quarter-pound beef patties daily. After a month, the level of TMAO in the blood tripled compared to what is was when they ate the diet of white meat or non-meat protein foods.
ADVERTISEMENT
In addition, half of the people in the study also ate a high-fat version of the three diets. The results were similar, suggesting that the effects of the protein source of TMAO were not related to how much fat was eaten.

An important finding was that increased TMAO levels are able to be reversed. When the people quit eating the red meat and changed to either the white meat or non-meat diet, their levels of TMAO decreased.

According to Charlotte Pratt, Ph.D., of the National Heart, Lung, and Blood Institute (NHLBI and one of the researchers, “These findings reinforce current dietary recommendations that encourage all ages to follow a heart-healthy eating plan that limits red meat. This means eating a variety of foods, including more vegetables, fruits, whole grains, low-fat dairy foods, and plant-based protein sources such as beans and peas.“

Nearly a quarter of middle-aged Americans have naturally elevated TMAO levels that increase in response to eating red meat, Stanley L. Hazen, senior author of the study, estimates. However, TMAO profiles differ from person to person, according to Hazen, so tracking this chemical marker could be a beneficial step in personalized medicine to fight heart disease.

How is TMAO linked to heart disease? Past studies have shown that it enhances the absorption of cholesterol into the cells of artery walls. The researchers of this study have also found that it interacts with blood cells that are responsible for normal blood clotting in a way that increases the risk of heart attack and stroke.

ADVERTISEMENT
Hazen and his colleagues have developed a simple blood test that can measure TMAO levels and a new class of drugs, not yet available to the public, that can lower TMAO levels and reduce atherosclerosis and clotting in animals.

Until more is known about this possible new culprit in heart disease, it would be wise to eat a heart-healthy diet that includes occasional small portions (three ounces) of lean cuts of red meat, along with a variety of other protein sources, including poultry, fish, seafood, beans, eggs, nuts and soy. Meats should be prepared using healthy cooking methods like baking, broiling, grilling or stewing. Include plenty of whole grains, fruits and vegetables, and low-fat dairy foods in your diet.

RELATED STORIES
Swapping Beans For Beef
Attention, Meat-Eaters
Hot Dogs And Bacon With A Coronary On The Side
LATEST NEWS