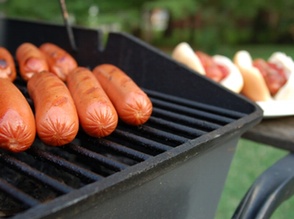 Hot Dogs and Bacon with a Coronary on the Side

Beth Fontenot, MS, RD, LDN
Processed red meats raise the risk of heart trouble — and death — by a lot. Have a fish taco.

If you’re planning on having a hot dog at the ballgame or a cookout this summer, you might want to reconsider and have some chicken or even a hamburger instead. Processed red meat has once again been linked to health problems.

A major new study finds that eating even moderate amounts of processed red meat, such as bacon and hot dogs or bologna, increases the risk of heart failure and death in men.

Men who ate the most processed meat were twice as likely to die of heart failure as men who consumed the least processed red meat.

Heart failure occurs when the heart can’t pump sufficient blood to meet the body’s needs. Sometimes the heart can’t fill with enough blood, and in other cases the heart can’t pump blood throughout the body with enough force. Heart failure does not mean the heart is about to quit working, but it is a condition that requires medical care.
ADVERTISEMENT
Nearly six million Americans have heart failure, and most will die within five years of diagnosis. The total cost of the disease, including health care costs and loss of productivity, is estimated at $34 billion per year.
Swedish Men, Red Meat and Heart Disease

Over 37,000 men between the ages of 45 and 79 participated in the long-term study by researchers at the Karolinska Institute in Stockholm, Sweden. The study is the first to look at the effects of processed and unprocessed red meat on the risk of heart failure.

Men who ate at least 75 grams — a little over two and a half ounces — of processed red meat per day had a 28 percent greater risk of heart failure compared to those who ate 25 grams or less per day.
ADVERTISEMENT

Skip Meats that Are Cured, Salted or Smoked

Processed meats are those that have been preserved by curing or salting, smoking, or by the addition of chemicals that act as preservatives. The problem with processed red meat is likely linked to the sodium, phosphates, and nitrates they contain, along with other food additives.

Past studies have connected the consumption of red meat — processed or unprocessed — with colorectal cancer, breast cancer, and type 2 diabetes. The Physicians’ Health Study, published in 2011, also found that a higher intake of red meat was associated with an increased risk of heart failure.

The problem with processed red meat is likely linked to the sodium, phosphates, and nitrates they contain, along with other food additives.

The findings make clear that one quick way to a healthier diet is to limit red meat in your diet. Processed red meat is best removed from the diet altogether, or at the very most, used sparingly. Red meat should be eaten only about once or twice a week.

The study was published in the American Heart Association journal Circulation: Heart Failure.

The American Heart Association recommends eating more chicken, fish, and beans than red meat, and limiting all meat intake to lean cuts totaling no more than six ounces a day. Fish should be consumed at least twice a week, and your total diet should focus on more fruits, vegetables, low fat dairy products, nuts, and whole grains.