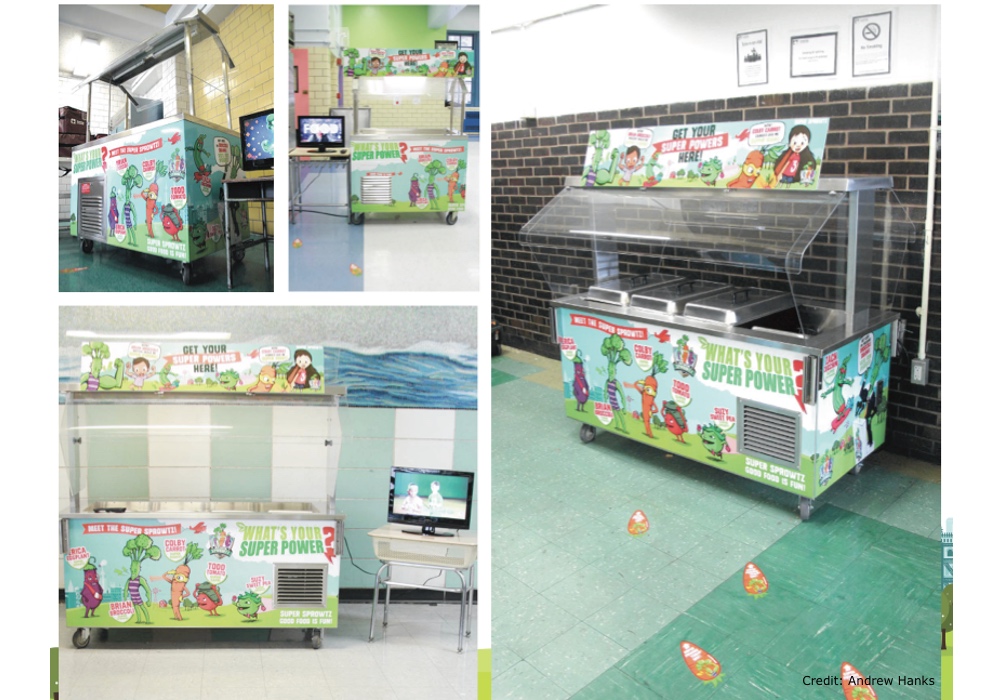 Getting kids to eat vegetables is tricky business. But if you look at what makes junk food so attractive to children, you may find a way to get them to happily eat their veggies.

All it takes is a little marketing. Researchers developed a cast of cartoon characters they hoped would make eating healthy more appealing, and it worked. So, let’s give the Super Sprowtz team a hand! Miki Mushroom, Zach Zucchini, and Suzie Sweet Pea possessed the power of persuasion that parents could only dream of when it came to convincing kids to eat their veggies.

Kids are much more likely to eat vegetables if it’s their idea rather than having the lunch lady plop a spoonful of squash on their lunch tray.

Andrew Hanks of Ohio State University and his fellow researchers devised the study when Hanks was at Cornell University. Using 10 public elementary schools in urban New York, they tested three interventions.
ADVERTISEMENT
At some schools they placed banners on the salad bar that depicted the supper veggie heroes. In other schools, they played Super Sprowtz videos in the school cafeterias. And in other schools, the combined approach was used — the banner and the videos. (See photos above.)

Videos alone starring the cartoon characters didn’t change the students’ selection of vegetables from the salad bar, but carts with banners depicting the vegetable superheroes did.

The number of children putting vegetables on their lunch trays nearly doubled after the banners were placed. In the schools where the banner was combined with the video playing in the cafeteria, vegetable selection increased from 10 percent to almost 35 percent.

“If we put the time and good resources into marketing healthy choices to kids, it can work,” Hanks said. Interventions don’t need to cost a lot of money, he added, and previous studies have shown that improving students’ nutrition positively affects their behavior and school performance. And kids are much more likely to eat vegetables if it’s their idea rather than having the cafeteria lady plop a spoonful of squash on their lunch tray.

Of course, cartoon characters aren’t going to convince middle and high school students to eat vegetables, but most younger children are intrigued with cartoon characters and superpowers, so why not use the power of effective marketing to encourage children to eat better and hopefully establish a lifelong habit?