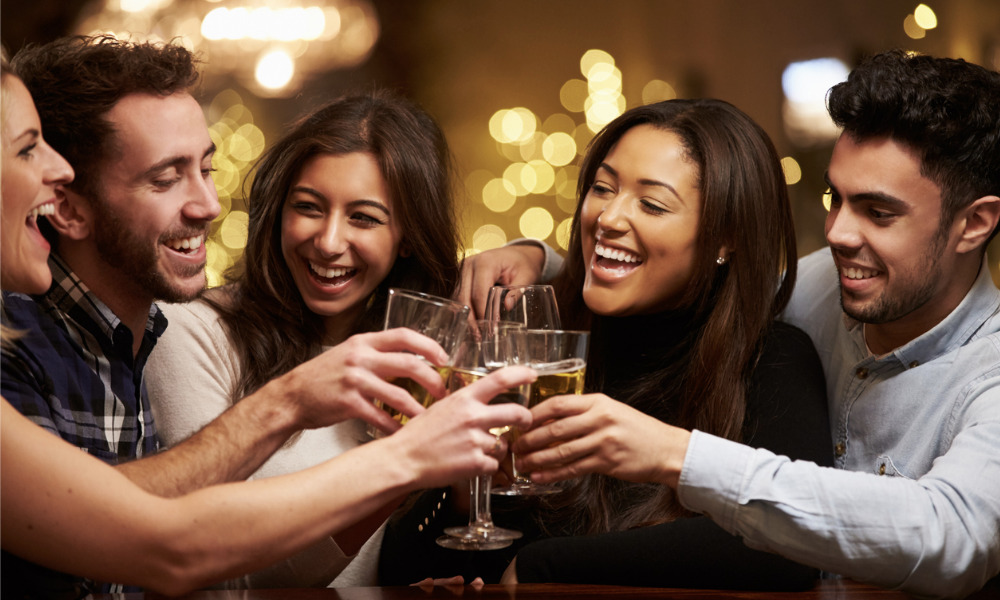 Charlotte LoBuono
You're at a bar and meet someone new. Alcohol makes it likely you will lean in and get closer. If you're with a friend, different story.

Among the restrictions put in place to prevent the spread of the novel coronavirus, the virus that causes COVID-19, closing bars and restaurants or limiting the number of patrons allowed there may be especially important to maintaining social distancing.

The Centers for Disease Control and Prevention (CDC) in the U.S. and the World Health Organization (WHO) have both recommended against combining alcohol consumption and socializing, because alcohol can make people less likely to follow social distancing guidelines.

The CDC and WHO have a point. Even strangers tend to get physically closer to each other as they become intoxicated, a study from the University of Illinois and the University of Pittsburgh has found. The finding suggests that alcohol may promote transmission of the virus, which is spread primarily through airborne droplets.

The pandemic lockdown interrupted recruitment for the study, Catharine Fairbairn, senior author on the study, told TheDoctor. But because of its public health significance, the researchers decided to analyze the data they already had.

Even strangers tend to get physically closer to each other as they become intoxicated.

During the 36-minute period, participants were allowed to interact freely and their behavior was videotaped. Computer-vision algorithms analyzed the distance between the participants’ faces at ten-second intervals over time.

“We measured the distance between individuals using machine learning methods that detect hands, arms, legs, and head position for both people,” said Nigel Bosch, a co-author on the study and a professor of information sciences and educational psychology at the University of Illinois. Geometry was used to turn the pixel coordinates of both participants into real-world distances based on objects of known size seen in the video.

ADVERTISEMENT
Liquid Courage
With strangers, there is a pull and push effect, said Fairbairn. “Strangers represent opportunities to form a new social connection, make a new friend, or even meet a romantic partner,” she points out. At the same time there is a kind of wariness around people who are not familiar: one never really knows what they might say or do.

People also tend to experience a sense of heightened self-consciousness with a stranger, and alcohol can help them break the ice. “We feel the pull of these potential new connections and have this sense of anxiety as well, and alcohol tends to relieve that anxiety, and frees us up to get to know this new person,” said Fairbairn, an assistant professor of psychology at the University of Illinois.

Participants sat across from each other at a table for the experiment, rather than standing at a bar, so their ability to move closer to one another was restricted. The study was also done in a quiet research lab, rather than a crowded bar. “People would likely draw even closer to one another in a bar with loud music playing, compared to our lab,” said Fairbairn. The team hopes to use future studies to collect data in a real-world bar setting.