Monkey Mind, A Memoir of Anxiety 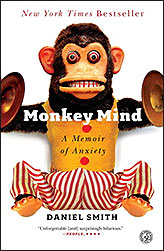 Help for Those Who Want to Help Themselves
In Monkey Mind, A Memoir of Anxiety, Daniel Smith, The Critchlow Chair in English at the College of New Rochelle, offers readers a guided tour of the thought processes swirling through the lively minds of those prone to anxiety. It is an entertaining and enlightening trip inside the head of an accomplished writer who manages to make anxiety funny — possibly his greatest gift to the anxiety-prone. Here he is on a day when anxiety has derailed his writing:

"Everyone gets distracted. What wasn't typical was what followed, which was the emergence and blossoming of anxiety. It started with a simple effort to regain focus. At first I was able to swat away most of the distracting thoughts, like gnats. But like gnats, the thoughts always returned, and in force, so that before long, swatting them away changed from an effort to get back to my primary occupation to the primary occupation itself. I changed, sitting there at my computer, from a writer to a thought-swatter."

“Monkey mind” is a Buddhist concept, and according to Smith, “Buddhism was made for the anxious like Christianity was made for the downtrodden or AA for the addicted. Its entire purpose is to foster equanimity,” and to tame the raging thoughts and emotions of monkey mind.

Lucky for us, Smith has gotten his monkey mind under control and produced this book. Anyone who is anxious, or knows someone who is, will find insight and recognition in Monkey Mind. They will also laugh out loud.

Excerpt: why i am qualified to write this book

About ten years ago, when I was living in Boston, I had a therapist whose office was in a clinic across the Charles River, at the top of a tall hill. The therapist, whose name was Brian, had a beard and moustache the color of ripe mangoes, and in his spare time he acted in community theater. Often the productions Brian performed in had historical settings, and he would groom his facial hair accordingly. Brian was the best therapist I’ve ever had, compassionate and patient and wise. But his appearance could be unsettling. One month, as opening night for The Secret Garden approached, he trimmed his beard progressively thinner while he grew his moustache thick, extending it down along the sides of his mouth. It was like getting counseling from General Custer.

ADVERTISEMENT
I had started going to Brian because I was deeply anxious. I’d been so before. This was my third and most serious bout with acute anxiety, and as with the others, my condition seemed disconnected from the facts of my life. I had graduated from college the year before, with honors. I had a prestigious job, loyal friends, a good apartment I shared with a bright and beautiful girlfriend, and as much money as I needed. Yet every day was torture. I slept fitfully, with recurring nightmares—tsunamis, feral animals, the violent deaths of loved ones. I had intestinal cramps and nausea and headaches. A sense of impending catastrophe colored every waking moment. Worse, I had the distinct sense that catastrophe had already occurred. I had made the wrong decisions, gone down the wrong path, screwed up in a ruinous, irrevocable, epoch-making way.

One afternoon, in this state of mind, I walked to therapy. My weekly walks were perilous in that without the distraction of work I was free to berate myself with impunity. There was no need even to concentrate on where I was going—the way to Brian’s office lay on the Freedom Trail, a two-and-a-half-mile-long path marked by a painted red line that leads through some of the most famous landmarks of the American Revolution. Boston’s beloved Freedom Trail: the Commons, the Granary Burying Ground, the Old South Meeting House, the Old North Church, the U.S.S. Constitution, . . . Brian’s office. It was as if the entire experiment in American democracy was fated to culminate in my recovery.

Anxiety is the most common of psychological complaints, not only the clinical condition that applies to the most people (nearly three of every ten Americans), but, it’s often said, a universal and insoluble feature of modern life. Everyone has it; everyone must deal with it. While the corollary to this is that everyone’s anxiety is different, shot through with idiosyncratic concerns and confusions, the experience is unified by its painfully hermetic character. Anxiety compels a person to think, but it is the type of thinking that gives thinking a bad name: solipsistic, self- eviscerating, unremitting, vicious.

From freeform anxiety to death-by-prostitution in eight short steps. Most weeks, I found that I could kill myself off before I’d crossed the bridge into Charlestown. This gave me a half a mile to fully experience the ignominy of my downfall: to see my mother wailing like a Sicilian peasant over my lime-complected corpse, to see the rabbi eulogizing my unfulfilled promise, to hear the thump of dirt on unfinished pine, to accompany my two brothers as they rush home from graveside to pull the plastic wrap off the cold-cut platters and switch on the coffee urn. Meanwhile, mounting the hill to the clinic, near-horizontal against the angle of ascent, I would do my best to weep—for cathartic purposes. These were pathetic attempts at weeping, the bleaty cries of someone who has wept himself dry, like an ape laughing: “Hunh! Hunh! Hunh! ” Sweaty with strain and agitation, I would try to manufacture bona fide tears and always I would fail. By the time I arrived at the clinic I was typically so demoralized I could barely stand. I was twenty-three years old and I looked like Nixon resigning the presidency.

ADVERTISEMENT
My opening monologues in therapy, like my en route self-destructions, rarely varied. I would open by insisting that I was a thoroughgoing wreck. My anxiety had grown so intense over the preceding week that I could no longer in good faith work. The only honorable thing for me to do was to leave my job. Following that, I would insist that my pain was so acute that it surely signaled legitimate insanity of one stripe or another, and that it would border on malpractice for Brian to continue to see me as an outpatient; what I required was hospitalization, preferably at an institution with manicured grounds and nurses who wore starched white hats with red crosses embroidered on them. Finally, I would plead for help. I would insist that Brian tell me what to do. Please, I would say. Please. Just tell me what to do. I can’t do this on my own. I’m not capable. Tell me what I need to do. I’ll do anything. Please. I’m begging you. Please. What should I do?

It was at some point during this opening speech, on the afternoon I am talking about, that Brian interrupted and asked if he could film me. Brian taught graduate students, he explained, and he sometimes used videotaped sessions during his seminars, for training purposes.

And so we carried on as if he had never made the request. For the forty or so minutes remaining in the session I sat wretched with hopelessness as Brian nodded and made maddeningly benign facial expressions, as was his habit. Then I retraced the steps of Paul Revere and Sam Adams and all the rest of the great patriots, this time in reverse, and returned to the office for the few terrible hours remaining in my professional day.

It was only later, while riding home on the train to hide under the covers until morning, that I realized why Brian had wanted to tape me. It was the same thing that had happened to my brother David, years earlier. When he was in grade school, David had severe buck teeth, broad and walrus-long. His overbite was so pronounced that our orthodontist, when he had finally managed to correct the problem, used a plaster cast of David’s teeth as a display during lectures at conferences, as if to say to the world of corrective dentistry, “Behold, people! This is how bad it can get!”

ADVERTISEMENT
My case, I realized, was Brian’s bucktooth mold. I was the clinical example: the etching of the arch-backed epileptic; the lithograph of the withered, birth-defected arm; the tumor with lips and a tongue; the six-eyed, noseless, baguette-shaped head in the jar.

I was anxiety personified.

MORE BOOKS WE LIKE
Self-Help That Works
The Patient Survival Guide
Unaccountable: What Hospitals Won't Tell You
LATEST NEWS