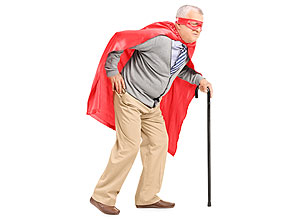 Alice G. Walton
Reduce your chances of landing in a nursing home -- walk a few blocks more. It may be all you need.

It is probably safe to say that the desire to live independently instead of in assisted living or a nursing home is pretty much universal among older adults. But would seniors be willing to walk a block or two more a day to make this outcome more likely?

According to a new study, a little bit of walking may be really all it takes to keep older adults on their feet and able to care for themselves.

Not only did the participants improve their mobility, their risk of major disability shrunk significantly.

We’ve heard it before: Getting a little more exercise can help you stay healthy, fight disease, and even live longer. The study really put this to the test by having sedentary seniors begin a modest exercise routine. Not only did the participants improve their mobility, their risk of major disability shrank significantly.
ADVERTISEMENT
The LIFE Study

The researchers, at institutions around the U.S., studied over 1,600 people who were talking part in the Lifestyle Interventions and Independence for Elders (LIFE) Study.

At the beginning of LIFE the participants, who were between 70 and 89 years of age, reported that they were active for only about 20 minutes per week. That level of activity — or inactivity — is considered sedentary, and increases the risk of disability.

The fact that the difference was seen in people who were just becoming active in their 70s or 80s should buoy the spirits of anyone who’s been sedentary for some time and resisted becoming more active.

Seniors in the study were randomly assigned to take part in either moderate physical activity — in which they walked and engaged in leg-strengthening exercises — or in an education program that stressed healthy aging, but did not instruct them to exercise, for two and a half years.
ADVERTISEMENT
At the end of the study period, about 30 percent of the people in the exercise group had sustained a short-term disability vs. 35 percent of the education group. When it came to more serious disabilities, 15 percent of the exercise group ended up permanently disabled, compared to 20 percent of those who received only instruction.
Changing Lives

The five percent difference may not sound dramatic, but if you consider the millions of Americans who are 70 or older, the results are more striking, and the public health implications profound. The fact that the difference was seen in people who were just becoming active in their 70s or 80s should buoy the spirits of anyone who’s been sedentary for some time and resisted becoming more active.

The weight you could lose and the mental and emotional boost exercise offers are three more potential benefits.

ADVERTISEMENT
Adult children may want to give their aging parents the gift of an exercise program or gym membership, or stop by for a walk every day or two if that is practical.
Get A Game Plan Going
If you are older and becoming concerned about your ability to get around, talk with your doctor or other health professional about how to begin an exercise program, particularly if you’ve been inactive for some time.

Start slow and build up. If at all possible, work with a trainer, since he or she will be able to guide you and know when you’re ready to increase intensity. And they will make sure you are not exercising in a way that could cause injury. If you’re already active, stay that way, since exercise over a lifetime is the best bet of all.

The weight you could lose and the mental and emotional boosts exercise offers are three more potential benefits. So is the chance to remain connected to your neighbors and the people, places and businesses you have been familiar with for years.

RELATED STORIES
Walking for brain health
What does it take to walk off a burger?
Apathy, entropy and activity
LATEST NEWS