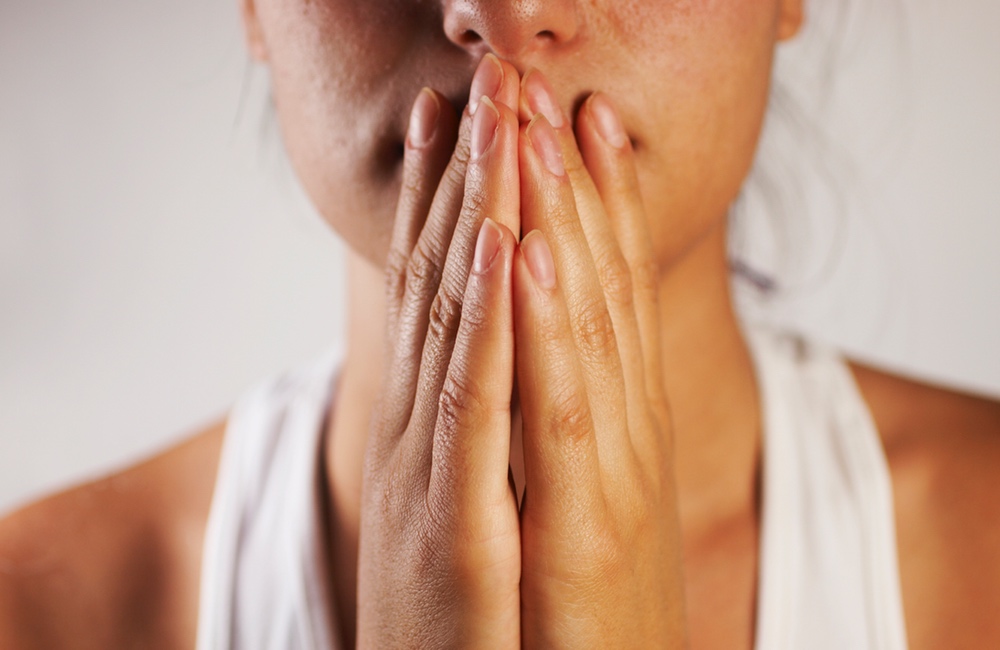 The Road to Menopause

Esther Entin, M.D.
Every woman alive goes through the transition to menopause. It can take years. Hot flashes are just one of the many unpleasant symptoms.

The hormonal changes happening during pre-menopause and menopause can bring on many challenging symptoms. Women typically experience hot flashes and night sweats, along with changes in mood, sleep and energy, all of which affect her quality of life and sense of well-being. Hormone replacement therapy can ease some of these, but can also cause other issues.

Women begin to experience symptoms typically associated with menopause long before they have actually ceased having periods.

Hot flashes are probably the most dramatic of these symptoms, but women experience a much broader range of moderate to severe physical and psychological symptoms as they transition to menopause than is usually documented, a new University of Michigan study finds. The team found that about a quarter of pre-menopausal women in their forties and early fifties have severe symptoms, and many women experience symptoms related to pre-menopause far earlier in their lives than has been generally reported.
ADVERTISEMENT
“We were surprised to find that a quarter of women in this relatively healthy cohort, reported a broad range of often severe symptoms prior to the onset of the menopausal transition, which influenced their perception of their own health as being fair to poor. Importantly, we observed that some women's symptoms get worse, while others improve as they transition through menopause, so this is a critical life phase for intervention,” Siobán Harlow, lead author of the study from the Center for Midlife Science at the University of Michigan, said in a statement.
Wide-Ranging Symptoms of Varying Severity

The investigators followed over 3200 women for at least 16 years. Women were from 42 to 52 years old when they enrolled in the study and each reported the symptoms they were experiencing as their bodies changed. Researchers collected data on 58 physical and psychological symptoms, starting at baseline and continuing over yearly follow-up visits. They asked about hot flashes and night sweats, pain, fatigue, sexual desire, sleep disturbance, vaginal dryness and physical health, and looked at how these affected a woman's life activities and sense of her own health.

Symptoms were rated for intensity — from highly symptomatic to moderate, mild and asymptomatic. Women who were classified as highly to moderately symptomatic had symptoms that included hot flashes, fatigue, sleep disturbance and poorer physical health. Women who were mildly impacted by their “change of life” had symptoms primarily associated with fatigue and psychological problems such as depression or nervousness. The researchers recorded which types of symptoms occurred together, and how intensely they were experienced across the periods of the menopause transition. 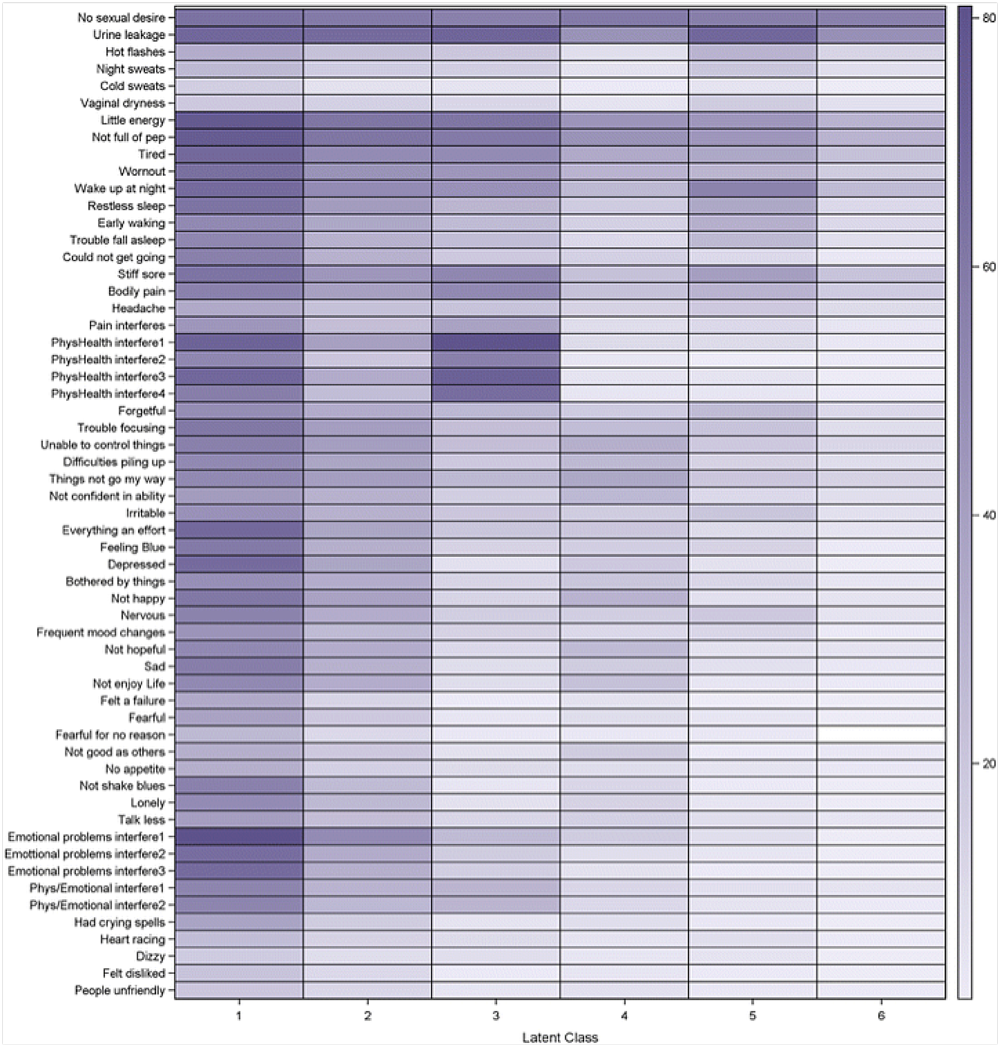 Women's symptoms often changed and arrived in clusters. Some started with symptoms at one level of severity and shifted to another level during the follow-up. “The way in which some symptoms cluster together may suggest underlying mechanisms, such as inflammation, that put women at risk of disability and chronic disease,” adds Harlow.

ADVERTISEMENT
Sleep disturbances and fatigue were common symptoms. These were reported even in the women who were least symptomatic, although they were more prevalent in the more symptomatic groups. Psychological symptoms were prominent among women having high- and moderate-intensity symptoms. Decreased sexual desire and urogenital symptoms did not differ in intensity across the levels of symptom clusters described and did not differentiate one group from another.
Behind Symptoms' Severity
The diversity of the study population — 28 percent African American, 47 percent white, 7.6 percent Chinese, 8.5 percent Hispanic, 8.5 percent Japanese — provided information about crosscultural and racial/ethnic differences in symptom profiles of the study population. Black women were one-half to one-third as likely to be in the more symptomatic clusters than white women. Japanese women were less likely to be highly symptomatic, and Chinese women less likely to be moderately symptomatic than white women.
Economic and Social Stress
Financial strain was strongly associated with increased symptoms; having a hard time paying for basics was associated with over a five-fold increased odds of being in the most symptomatic category. This may reflect the stress of financial and socioeconomic barriers to obtaining medical care and living healthy life styles. “The way in which some symptoms cluster together may suggest underlying mechanisms, such as inflammation, that put women at risk of disability and chronic disease,” adds Harlow.
Smoking and Overweight
Obesity doubled the risk of being in the highly symptomatic class and raised the chances of moderate symptoms by 80%. Current and past smokers were at increased risk of being highly symptomatic.
ADVERTISEMENT

Women who were classified as highly to moderately symptomatic had symptoms that included hot flashes, fatigue, sleep disturbance and poorer physical health.

When women were asked about their general health, those who had symptoms ranging from moderate to high were, unsurprisingly, more likely to rate their health as fair to poor, than the women who were less symptomatic.

Women begin to experience symptoms typically associated with menopause long before they have actually ceased having periods. That a quarter of premenopausal women are already experiencing numerous physical and psychological symptoms, and that these symptoms affect their personal assessments of their own health, suggests that the symptoms of premenopause should be considered and possibly treated in women as young as in their thirties.

The authors hope this more detailed picture of menopause will pave the way for treatment.

This study is published and freely available in Women's Midlife Health.