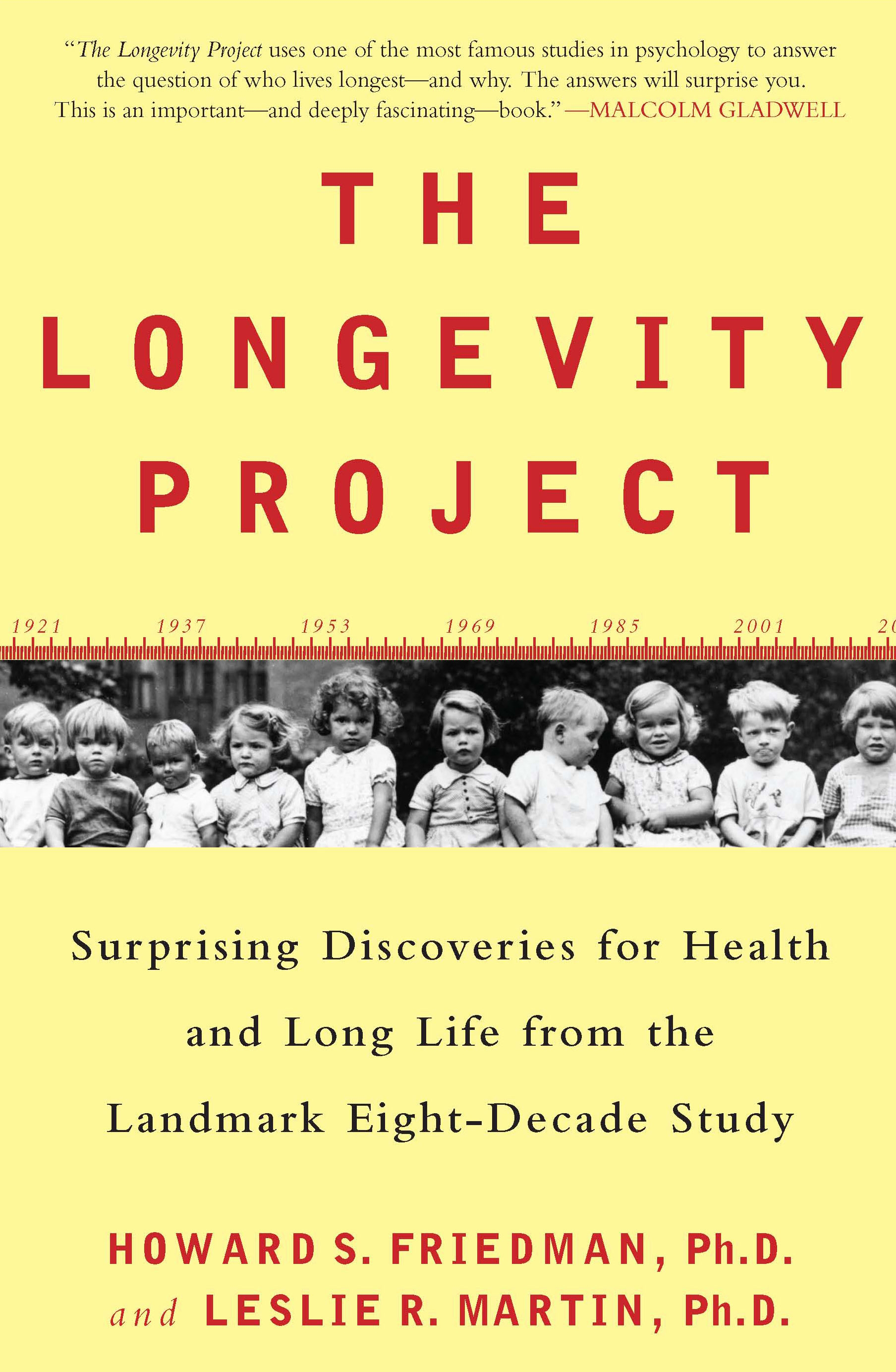 In The Longevity Project, Surprising Discoveries for Health and Long Life from the Landmark Eight-Decade Study, health psychologists Dr. Howard Friedman and Dr. Leslie Martin set out to determine who lives longest and why.

For their Longevity Project, Friedman and Martin used data from an ongoing study begun by Stanford psychologist Lewis Terman in 1921 as he was developing an idea that would become the intelligence quotient, better known as IQ. Terman's study monitored the health, attitudes, hobbies, habits, careers and marriages of a group of bright boys and girls. Eight decades later, Terman's subjects were still providing data. Drs. Friedman and Martin use this trove of information, putting it through a variety of well-accepted statistical analyses, to develop a picture of what works when it comes to health and long life.

Their findings confirm some of what we know (yes, activity is important!), but by looking back at people's lives they are able to trace the subtler choices or clusters of behaviors that add up to a long and healthy life. The result is a book that deepens our understanding of what a healthy life is. What follows is an excerpt from The Longevity Project in which the authors describe some of these clusters or pathways.

Excerpts From Chapter 15, Individual Paths to Health and Long Life
Which Path?

One practical way to understand the threats to health and the likely best changes to be made is to match one’s own inclinations to one of the paths we have discovered... There are many variations of healthy and unhealthy pathways, but here are some of the most common ones…

ADVERTISEMENT
Not Easy Street
Norris Bradbury, the scientist and Terman participant who oversaw the nation’s nuclear arsenal for many years at a time of severe Cold War tension, was not enfeebled by the relentless strain he encountered. Yes, such individuals face adrenaline surges and high-pressure deadlines, but our studies found hard work and accomplishment to be a strong predictor of long life. Along with his wife of sixty-four years, children, grandchildren, and great-grandchildren, Bradbury thrived. Shelley Smith Mydans, the Life reporter, was a world traveler, prisoner of war, and often-threatened correspondent, yet she was not done in by stress. Those who were the most successful were the ones least likely to die at any given age. Ambition was not a problem and taking it easy was not healthy. In fact, those men who were carefree, undependable, and unambitious in childhood and very unsuccessful in their careers had a whopping increase in their mortality risk. On the other hand, if you have lots of responsibilities on the job but few resources and little cooperation from your coworkers, it is time for a change.

…The groups you associate with often determine the type of person you become. For people who want improved health, association with other healthy people is usually the strongest and most direct path of change. James was not a scientist like John, but he found an analogous, if unorthodox, path to long life. Tactful and sociable but initially not very conscientious, James nevertheless was able to develop a maturity that increased each year. Although his parents divorced, he himself had a good marriage, completed his education, and stayed in touch with his sensitive side—by gradually developing a deep satisfaction and pride in his work and his hobbies, especially his music and stage work. Individuals with an artistic or philosophical bent stayed healthy if they continued to be physically active, steadily matured, and then remained responsible…

The Road Less Traveled
A striking theme emerged from our findings about those individuals – usually women – who often ignored social convention. Emma followed a life path that many young women of her era tried to avoid: She never married. She pursued her career with passion and her life was rewarding and full. She traveled. She was independent yet had a group of close friends (and her siblings) to share her joys and to encourage her during difficult times. Emma’s reports to Terman over the years don’t reflect a woman who felt her life was incomplete. Instead they suggest a spirited woman, very agreeable but serious, taking advantage of the opportunities afforded her. Although a good marriage can contribute to health and well-being, marriage can also bring troubles, plus the possibility of breakup and its health-damaging consequences...
The Road to Resilience
The highly successful Hollywood director Edward Dmytryk, one of the hardest-working Terman subjects, led one of the most stressful lives yet lived to age ninety. Those who cared about others – who were agreeable but not necessarily sociable – often thrived even in the face of adversity. Like Dmytryk, they sought out the best in others, which was a key road to resilience. The same could be said of those children who faced the divorce of their parents. Those who got back on track, with a sense of accomplishment in their careers and a happy marriage of their own, lived long lives.

We didn’t find that competition and drive are unhealthy characteristics. On the contrary, those who were the most disappointed with their achievements died the youngest…

ADVERTISEMENT
The Less Sunny Side of the Street
…Neurotic worrying as part of a syndrome of catastrophizing, anger, and depression was a sign of heightened risk [of illness], but for many people, nagging thoughts and irksome concerns were important to heading toward better health. This, too, was an unexpected finding that goes against common wisdom.

So there’s no need for worriers to fret that this trait will threaten their health. Unless your worrying is disrupting your friendships or impairing your work, it can come in handy (and be health promoting) when you’re facing various challenges needing thoughtful consideration...

The Persistent, Consequential, and Social Life

…Across the life span, many predictors emerged as to who would do better and who would do worse, who would live longer and who would die younger. It was not good cheer or being popular and outgoing that made the difference. It was also not those who took life easy, played it safe, or avoided stress who lived the longest. Rather, it was those who – through an often-complex pattern of persistence, prudence, hard work, and close involvement with friends and communities – headed down meaningful, interesting life paths and, as we have illustrated, found their way back to these healthy paths each time they were pushed off the road.

The qualities and lifestyles cultivated by people on these long-life paths reflect an active pursuit of goals, a deep satisfaction with life, and a strong sense of accomplishment. That’s not to say that these people possessed a giddy sense of happiness — we described how cheerfulness doesn’t necessarily lead to a long life. But having a large social network, engaging in physical activities that naturally draw you in, giving back to your community, enjoying and thriving in your career, and nurturing a healthy marriage or close friendships can do more than add many years to your life. Together, they represent the living with purpose that comes from working hard, reaching out to others, and bouncing back from difficult times.