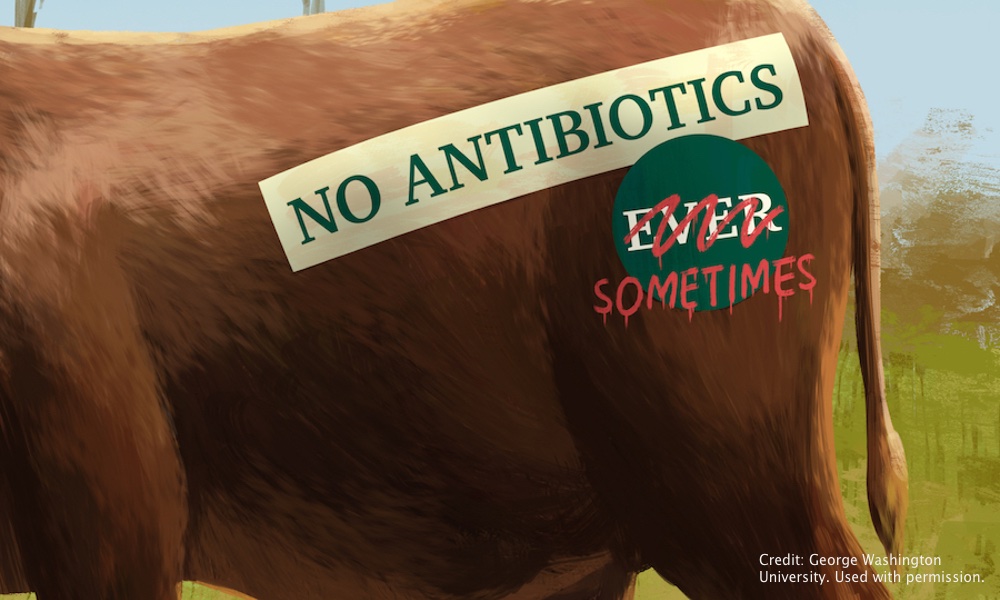 Before You Buy Antibiotic-Free Meat...

We all rely on labels to tell us about the foods we buy, but those touting “No Antibiotics Ever” are unpoliced. Buyer beware.

Have you ever paid a premium price for a steak that was labeled “No Added Antibiotics” or something similar? If so, you might not have gotten what you paid for. According to a new study, a considerable number of cattle intended for the antibiotic-free market have indeed been given antibiotics.

Strengthening verification and enforcement by the USDA and retailers would go a long way to ensuring that consumers got the beef they think they are getting.

However, just like humans, animals get sick and sometimes require antibiotics. Using them unnecessarily, though, can contribute to antibiotic resistance, or the inability of an antibiotic to kill the germs they were designed against.
ADVERTISEMENT
Some farming practices include the delivery of antibiotics through feed and water to control the spread of illness within a herd that has some sick animals or to prevent illness in general. Antibiotics have also been used to promote weight gain in cattle.

Urine samples from nearly 700 beef cattle to be slaughtered at 312 lots and 33 different “Raised without Antibiotics” certified feedyards were analyzed for the study. The George Washington University researchers found that in 42 percent of the feedyards sampled, at least one animal tested positive. The number represents approximately 15 percent of the “Raised without Antibiotics” cattle processed during the study period.

“Raised without Antibiotics” production is an attempt to address a serious public health issue, but the system only works if labels are verified. Strengthening verification and enforcement by the USDA and retailers would go a long way to ensuring that consumers got the beef they think they are getting, the researchers said.

What does this say about the “Raised without Antibiotics” label on meat? According to researcher Lance B. Price, co-director of the Antibiotic Resistance Action Center at the George Washington University, though the majority of meat producers appear to be following the certification protocol, it suggests that the labels lack integrity.

Labels on beef claiming “No Antibiotics Ever,” “No Added Antibiotics” and “Raised without Antibiotics” are approved by the USDA. The USDA approval confers credibility in the marketplace. It also means that meat designated as antibiotic-free generally commands a higher price.

ADVERTISEMENT
There is, however, no mandated testing to validate the claims, even though it is relatively simple to confirm whether or not meat contains antibiotics. This creates strong incentives to cheat on the claims.

“Until either the USDA acts to rigorously verify these claims or retailers eliminate their safe harbor of ignorance, consumers should not rely on the accuracy of these labels,” Price explained in a statement. “My hope is that consumers and advocacy groups will pressure the USDA to reform these important label claims.”