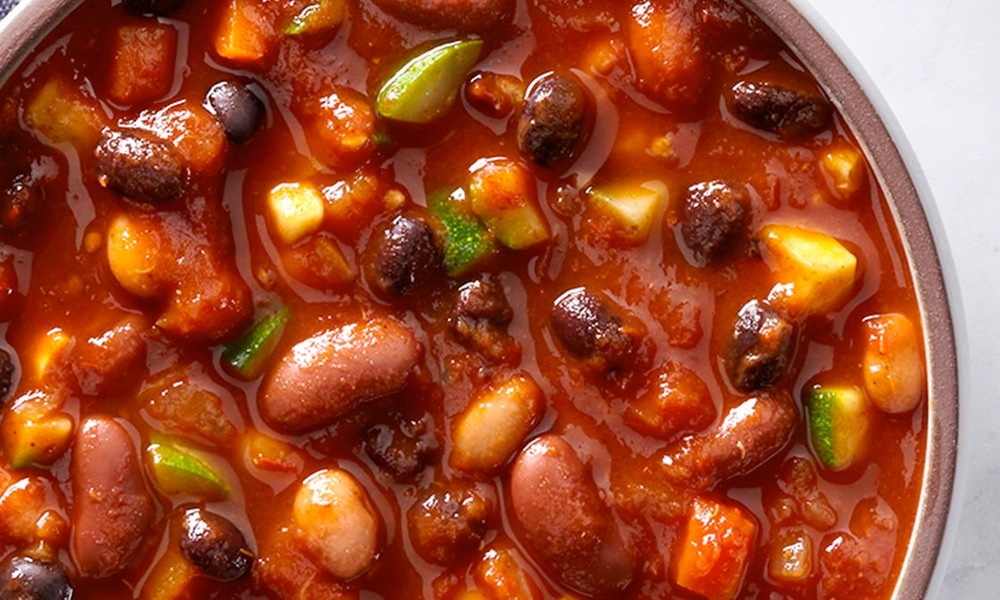 You don't have to give up meat to reduce your risk of heart disease. Let plant-based foods like vegetarian chili replace it now and then.

Heart disease is the leading cause of death among women in the United States. Roughly six percent of women age 20 and above have coronary heart disease, the most common type of heart disease. The risk factors for heart disease are largely preventable, or at least manageable, and a good diet and regular exercise are among the best ways of lowering that risk.

Two new studies published in the Journal of the American Heart Association show that whether she is young or old, a woman’s risk of heart attack, heart failure and clogged arteries goes down when she eats a diet grounded in plant foods. The American Heart Association has long recommended a diet that focuses on a variety of fruits and vegetables, whole grains, low fat milk and dairy foods, nuts and legumes, fish and skinless poultry. Saturated fats, trans fats, salt, red meat, sweets and sugary beverages should be consumed in limited amounts.

One of the two studies looked at the long-term consumption of a plant-based diet. Unlike other studies that have focused on specific foods or food groups, this research, conducted by the University of Minnesota, examined overall dietary patterns in a group of nearly 5,000 people who were aged 18 to 30 at the beginning of the study, following them for over 20 years. Over half of the participants were women.
ADVERTISEMENT
Forty-six types of food were divided into three classes based on their association with cardiovascular disease: beneficial, adverse or neutral. Beneficial foods included fruits, vegetables, beans, whole grains and nuts. Fried foods, high-fat red meat, salty snack foods, baked goods and soft drinks were considered adverse foods, while potatoes, refined grains, lean meats and shellfish were classified as neutral foods.

“A plant-centered diet is not necessarily vegetarian,” University of Minnesota researcher Yuni Choi said in a statement. “People can choose among plant foods that are as close to natural as possible, not highly processed. We think that individuals can include animal products in moderation from time to time, such as non-fried poultry, non-fried fish, eggs and low-fat dairy.”

In a second study conducted by University of Toronto researchers, the effect of a diet called the “Portfolio Diet,” which focuses on plant-based foods the U.S. Food and Drug Administration recommends for their ability to help lower bad cholesterol (LDL) levels, was examined.

The Portfolio Diet includes plant proteins from soy, beans or tofu; soluble fiber from foods like oats, barley, okra, eggplant, oranges, apples and berries; plant sterols found in enriched foods like margarine; and monounsaturated fats such as those found in olive oil, canola oil and avocadoes. Limited consumption of saturated fat and dietary cholesterol is also part of the diet.

The findings of these two studies underscore the way adopting a more plant-based diet can seriously reduce the risk of cardiovascular disease in women — and men — of all ages.

Over 120,000 postmenopausal women who were between the ages of 50 and 79 and did not have preexisting cardiovascular disease took part in the study. They were followed for an average of 15 years. Self-reported food frequency questionnaires were used to score each woman’s compliance with the Portfolio Diet.

“We…found a dose response in our study, meaning that you can start small, adding one component of the Portfolio Diet at a time, and gain more heart-health benefits as you add more components,” Andrea J. Glenn, of the University of Toronto, said in a statement.

Taken together, the findings of these two studies underscore the way adopting a more plant-based diet can seriously reduce the risk of cardiovascular disease in women — and men — of all ages. You don’t have to give up animal foods entirely, and even small, gradual changes will offer have positive effects on your heart’s health. Go ahead — add an extra half cup or more of fruits or vegetables to your meals every day or so.

RELATED STORIES
Are You Vegetarian Or Pastatarian?
A Shortcut To A Healthier Diet
Meat And The Microbiome
LATEST NEWS