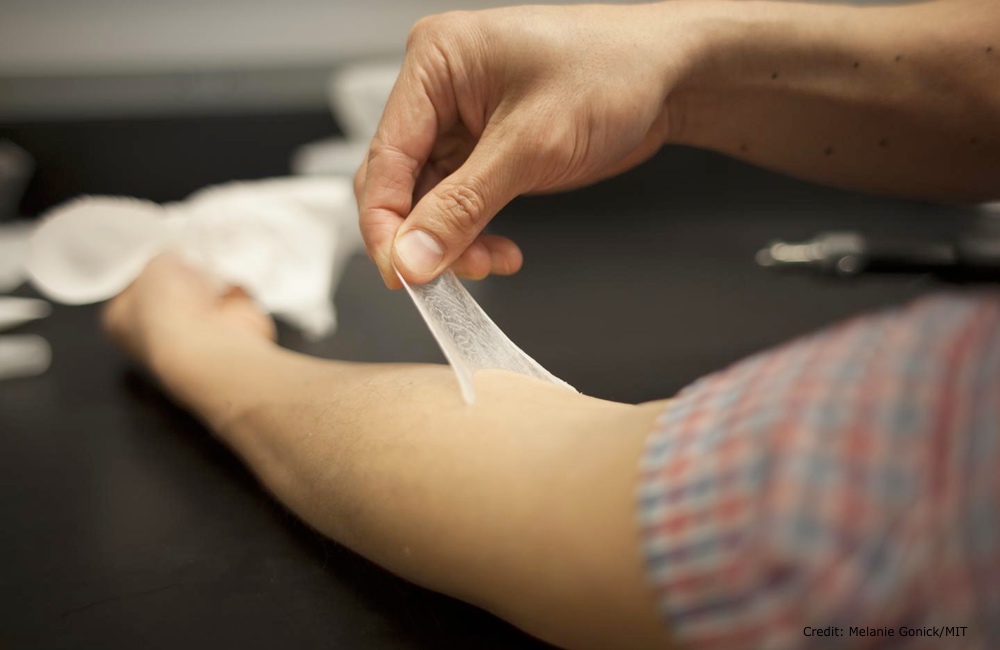 Neil Wagner
XPL is an invisible, elastic, polymer that when applied to skin, tightens it and makes wrinkles disappear.

Anyone worried about sagging, aging skin will be glad to learn that scientists from MIT, Massachusetts General Hospital and industry have pooled their talents to develop a silicone-based second skin.

The “skin” (see above) is more elastic than real skin, hydrates better than commercial moisturizers, and also tightens the skin; so it could be used to eliminate bags around the eyes or other areas where age has taken its toll.

Aside from these obvious cosmetic uses, the material can also provide UV protection and might help treat medical conditions such as eczema.

From band-aids to botox, there are plenty of niches that XPL might eventually be able to fill.

“It's an invisible layer that can provide a barrier, provide cosmetic improvement and potentially deliver a drug locally to the area that's being treated. Those three things together could really make it ideal for use in humans,” said study co-author, Daniel Anderson, an associate professor at MIT, in a statement.
ADVERTISEMENT

The material is called XPL (for cross-linked polymer) and is applied in two stages. First a siloxane cream lays down a layer of the basic silicon/oxygen material. Then a second cream containing a catalyst is added. This transforms the siloxane into a strong cross-linked chain that forms the final covering that's elastic, comfortable and practically invisible. It won't wash or rub off.

At the moment an application only lasts for about 24 hours.

XPL eliminates bags and smoothes wrinkles by tightening the skin, something the skin did by itself in its younger days. As skin ages, it tends to become less firm and also less flexible.

The researchers performed several pilot tests of XPL on people. As seen in the image, when applied to the eyelid, it eliminated bags. In another test, when applied to the forearm, skin was considerably more elastic after XPL was applied. And in a third test, when applied to dry patches on volunteers' legs, XPL significantly lessened water loss. It worked about as well as petroleum jelly two hours after application but much better at 24 hours. That sounds like just what dry, irritated skin is looking for.

None of the study participants reported any irritation or allergic reaction from wearing XPL. From band-aids to botox, there are plenty of niches that XPL might eventually be able to fill. No word yet on when it will be available.

An article on the study appears in Nature Materials.

RELATED STORIES
A High Price To Pay For A Tan
Too Many Moles?
Food Allergy - Eczema Link
LATEST NEWS