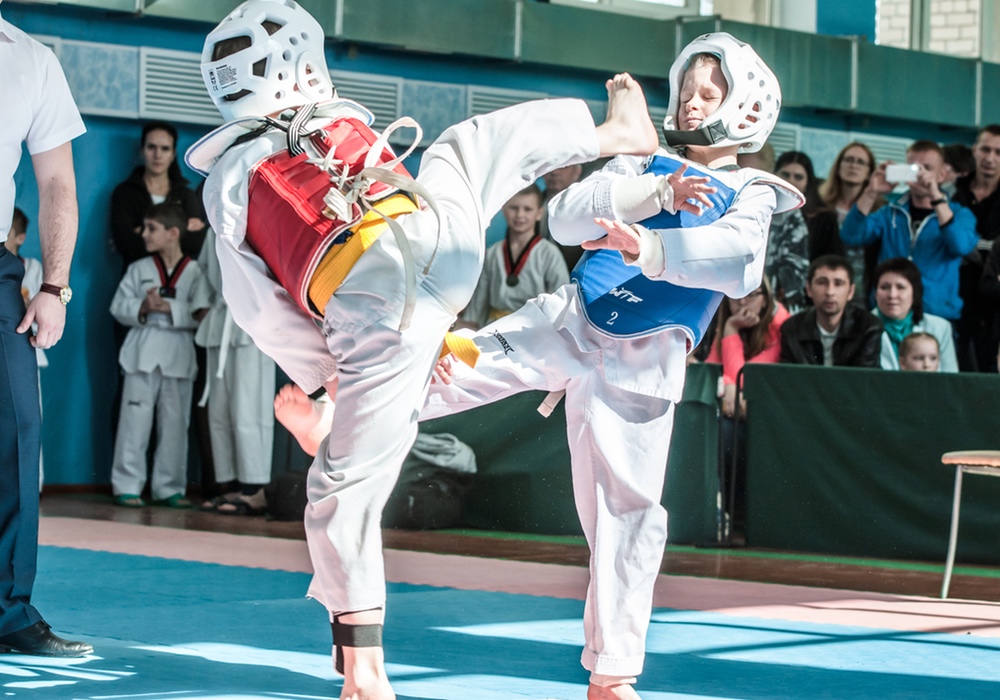 Martial arts, such as judo, kung fu, kick boxing and taekwondo, teach many valuable skills — discipline, self defense, balance, strength and flexibility. They are also a good form of exercise.

Children often become interested in marital arts through the superheroes they watch on television. Martial arts do carry certain risks, however, particularly for kids. That is why the American Academy of Pediatrics has recently provided some guidelines to improve their safety for children and teens.

As with any sport, proper training and supervision, appropriate equipment, and knowledgable teachers and coaches are keys to safety.
ADVERTISEMENT
The Academy's clinical report covers the various types of martial arts and their relative risk of injury: from those that involve mainly basic forms and techniques with little or no contact, to contact-based sparring and competitive training. It offers a special set of cautions for parents of kids who watch mixed martial arts (MMA), which has features of several styles combined.
Martial Arts Injuries

Children and teens can get hurt while practicing and performing martial arts, though the exact numbers are difficult to quantify. It is similarly hard to determine whether younger or older kids are more injury-prone, and whether boys or girls are more vulnerable. While the injuries typically are sprains, strains, bumps and bruises, there is the possibility of broken bones, concussions, as well as neck and dental injuries.

The types of injuries that occur often depend on the specific martial art being practiced. For example, shoulder, hand, wrist and finger injuries are common in judo. Injuries to legs and feet are more common in taekwondo and karate, and more commonly result from being kicked. Concussions were more likely in judo compared to karate and the choking techniques that are sometimes used in judo can lead to loss of consciousness.

ADVERTISEMENT
Protective Gear Helps and Harms
Mouth guards, eye and face protection and headgear have been used to prevent injuries to the head and face as well as concussions sustained during strikes and kicks, but it is not always clear that they have worked effectively. Studies have found that their use is not actually protective, and some worry that such equipment provides a false sense of security regarding the degree of protection provided.

For example, mouth guards have not been found to be as effective in preventing dental trauma in martial arts as they have in other contact sports such as football and lacrosse. There is no evidence that concussions are reduced by protective headgear, and the gear does not in any way protect against the risks of chokeholds.

Rules Reduce Risk
One thing that does help reduce injury is having appropriate rules that are strictly enforced, the report found. These include limiting the use of excessive force, designating certain parts of the body off limits for blows (such as throat, arms legs, groin, instep, joints) and limiting the use of open handed blows and certain throwing techniques. Children who consistently ignore the rules should be removed from practice.

Emphasizing defensive techniques helps, too. Teaching the participants effective skills to block blows and training them about safe competition practices have also been suggested to reduce injury in competitive taekwondo settings.

ADVERTISEMENT
Finally, martial arts programs need to follow the same guidelines for the management of suspected and documented concussions and decisions about safe return to competition that other sports do.
How to Maximize the Benefits; Minimize the Risk

Even with these risks, martial arts should be considered as a way for children and teens to achieve physical fitness and conditioning. They also help students gain the benefits of discipline and companionship.

The report recommends that:

The authors offer a special note regarding the popularity of Professional Mixed Martial Arts in the media.

The authors offer a special note regarding the popularity of Professional Mixed Martial Arts in the media. Children may seek to imitate what they see performed by adult competitors, and they may become more aggressive or desensitized to violence by this exposure. They urge parental control over their children's and teens' exposure to MMA and recommend cautioning children/teens and families against imitation of risky moves, particularly those involving blows to the head.

As in any sport, parents need to play a crucial role in providing opportunities for their children to participate safely and productively. If your child becomes interested in joining a class, educate yourself about the type of martial arts being performed. Watch some classes; talk to the instructors; ask other parents about their children's experiences before making a commitment. Shop around for a program that suits your child and is built on giving kids a safe — and fun — foundation.