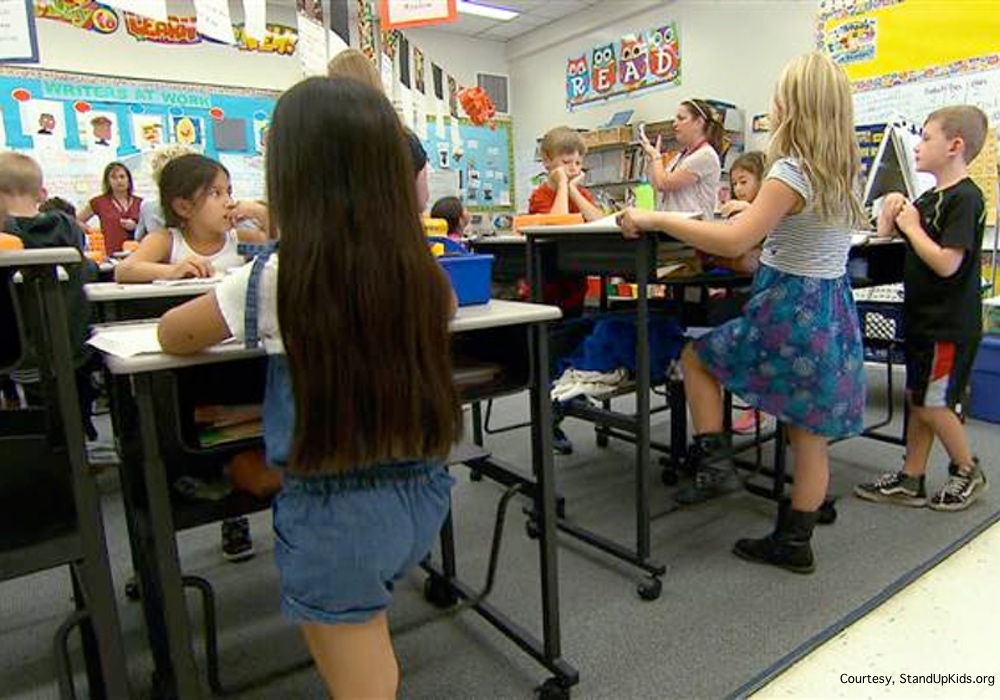 Neil Wagner
Giving students standing desks to use during the school day lowers their BMIs and the risk of obesity.

School days are here again, and while in some places this marks the beginning of a more sedentary time of year, for other districts it is quite the opposite. When three Texas elementary schools switched from conventional desks to standing desks, children ended up measurably thinner two years later.

There are different types of standing desks. The desks used in this study were designed by the researchers and are called stand-biased desks. Though intended to be principally used while standing up, they come with a stool and footrest so they can also be used for occasional sitting, which can help relieve back tension and leg fatigue.

On average, the rise in BMI of the children seated at desks was four times that of children who stood.

Nearly 300 third and fourth graders in 24 different classrooms took part in the study. Some used standing desks exclusively over the two-year period; others used conventional desks exclusively; and some used a different type of desk each year.
ADVERTISEMENT
The students' height, weight, gender, and age were recorded, as well as their calculated BMI, BMI percentile and BMI category — normal or underweight, overweight or obese — at the beginning and end of the study.

Because weight and height change during growth and development, as does their relation to body fat, a child’s BMI needs to be interpreted relative to that of other children of the same sex and age to tell if a child is overweight or obese. A BMI measurement is not enough. BMI percentile is a measure of how a child's BMI compares to other children of the same age and sex.

After two years, the children who used the standing desks exclusively had a 5.24 drop in their BMI percentile compared to children who had only used the conventional, sitting, desks. On average, the rise in BMI of the children seated at desks was four times that of children who stood.

With an estimated one in six children overweight nationwide and one in seven obese, standing desks might be one way to help turn the tide. And too much sitting has so many ill-effects on health that more time out of the chair should be good for children's health in general.

ADVERTISEMENT
The weight and health benefits of standing desks hold for adults, too. Another recent study in Occupational Medicine found that adults using standing desks at work could burn about 50 extra calories (more for men, less for women) by spending half the eight-hour workday standing and the other half sitting. Since it is estimated that for 90% of all people, burning about 100 extra calories through exercise daily would be enough to prevent weight gain, switching to a standing desk could get people halfway there.

Perhaps more adults would be using standing desks today if they had been introduced to them when they were children, as the Texas schoolchildren were. What better place to start than in the schoolroom?

The school study appears in the American Journal of Public Health.

RELATED STORIES
A Lesson In After-School Obesity
Back To School? Keep Moving
The Breakfast Of Academic Champions
LATEST NEWS