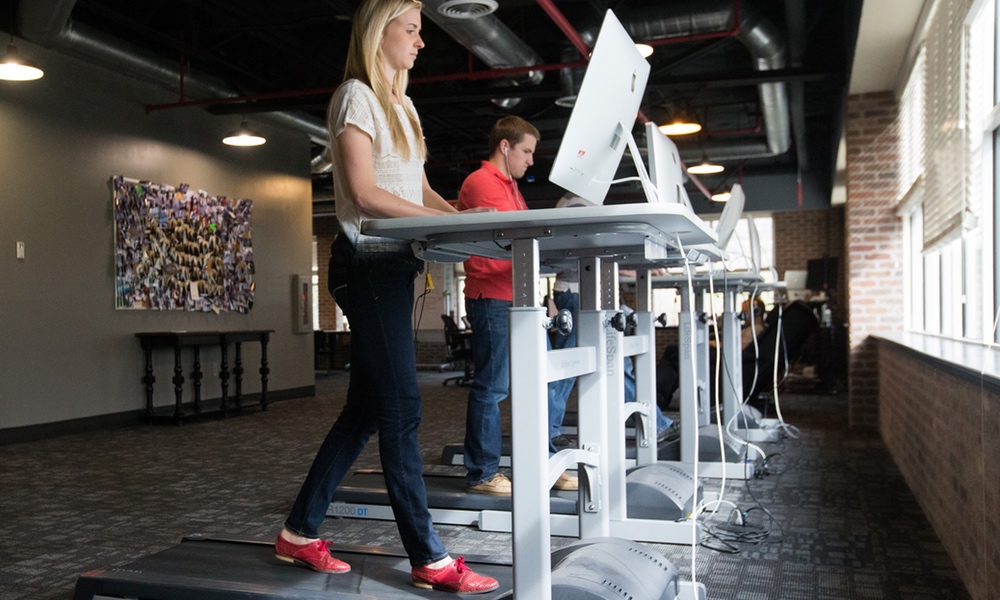 The Case for Treadmill Desks

Office workers trying to fight the weight gain and loss of fitness sedentary desk jobs bring have a new ally — treadmill desks. But anyone interested in using a treadmill desk at work may first have to convince their boss that productivity won't suffer if they walk while they work.

A new study provides some ammunition and evidence for treadmill desks as a good way to overcome the risks of sitting too much.

Those who switched to a treadmill desk were able to work just about as well as they did when sitting at a conventional desk, researchers found.

People processed thoughts a bit more slowly, though not significantly so, when working at a treadmill desk. In general, workers performed over 90% as well while walking as they did while sitting. 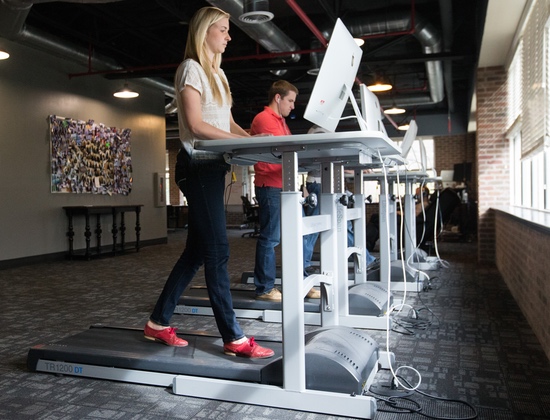 Typing speed did go down — by about 13 words per minute. And the authors offer two potential ways to fix that.

Too much sitting is bad for your health. One response to this has been the emergence of standing desks, desks that allow you to work while standing instead of sitting. The treadmill desk, a standing desk equipped with a treadmill, takes the concept further, enabling you to walk while you work.

Aside from the clear improvement in activity, however, there hasn't been much research on how these desks affect productivity.

Brigham Young University researchers recruited 75 healthy volunteers to work for 45 minutes, either walking at a treadmill desk or sitting at a conventional desk.

The effects of treadmill desks on mental processing were minimal. Motor skills like typing suffered the most.

Researchers asked the volunteers to read numbers every three seconds and add them together. In a second test, participants were given a list of 15 unrelated words and had to recall as many of them as possible. And, finally, the workers did a typing test.
ADVERTISEMENT

The treadmill walkers recalled 7% fewer words, gave 9% more wrong answers on the addition test and typed 13 words per minute slower. But they did retain what they learned just as well as people using conventional desks.

Most previous studies of the effect of treadmill desks on work ability have tested motor skills, such as use of a mouse or typing speed, and have generally found results similar to what was seen in this study. With respect to cognitive ability, however, some of the few studies found no adverse affect, while others observed a modest drop in abilities, similar to the current study's findings.

The BYU researchers suspect that these differences merely reflect changes in study definitions of cognitive ability, as well as varying treadmill speeds, 1.5 miles per hour in the current study, but speeds ranging from 0.5 to 2.5 hours in the earlier research.

All the researchers, however, agree that the effects of treadmill desks on mental processing were minimal. It's motor skills like typing that suffer the most.

“For health alone it’s great, but if the cognitive decline is small, then you bet it’s worth it,” neuroscientist Michael Larson said in a statement. “The health benefits likely outweigh any slight performance dips you may get from implementing the treadmill desk.”

The authors mention two possible fixes that might narrow the typing gap. First, they note that they used desks whose height was fixed, while many other desk models are adjustable, which would allow a worker to set the height that lets them type the best. And people in this study were also given only five-minutes to become acquainted with the treadmill desk before being tested. It's possible that a longer period of adjustment would boost typing speed.

Even if treadmill desks prove unsatisfactory for typing, there are a host of work activities, such as reading reports or checking emails, which require little in the way of motor skills. And as for activities where there is a minor drop off in productivity, the health benefit to employees may more than offset this. After all, any company with long-term plans is likely to need long-term employees. And that means healthy employees.