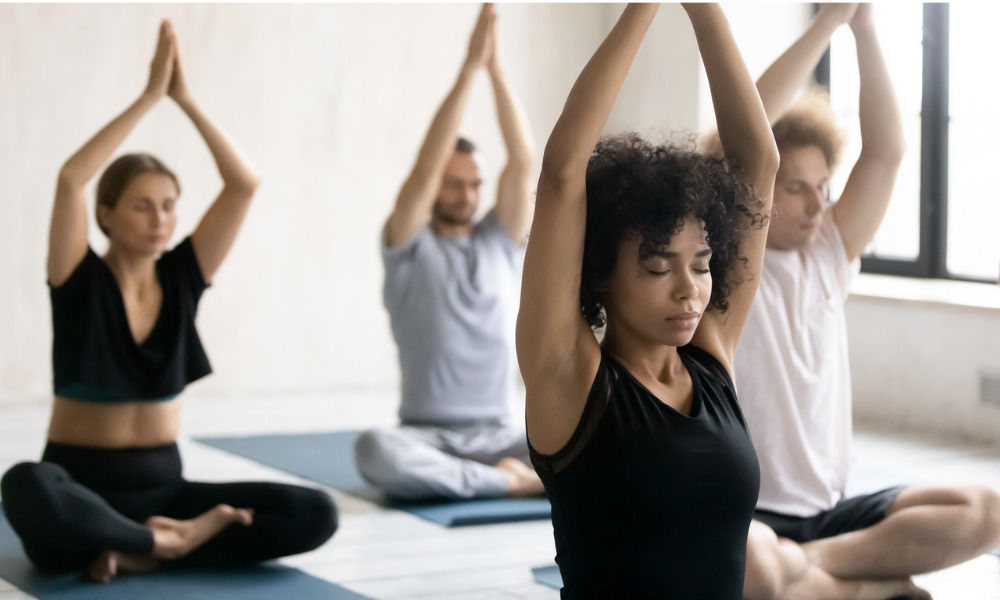 Taking Anxiety to the Mat

Charlotte LoBuono
People plagued by worries have a number of treatments to choose from. Yoga can be a useful alternative for some.

Feeling anxious — feeling restless or on edge — is unpleasant; it is also pretty common, especially right now. When worries are difficult to control and cause distress or interfere with a person’s daily activities and occur more days than not for at least six months, generalized anxiety disorder is indicated. The disorder is common: it affects almost seven million Americans. Yet only about half of those seek treatment.

Generalized anxiety is often treated with cognitive behavioral therapy. Medications such as antidepressants and benzodiazepines can also help. But not everyone wants to take medication, which can become addicting or carry unwanted side effects. Depending on where one lives, it can be difficult to find a therapist trained in cognitive behavioral therapy or get an appointment.

These are some of the reasons why people turn to complementary and alternative therapies, including yoga, to ease their anxiety. Yoga has not been much researched as treatment for anxiety, so a team of American researchers looked at how the effectiveness of yoga as a short-term treatment for generalized anxiety disorder compared to cognitive behavioral therapy.
ADVERTISEMENT
Yoga vs. Cognitive Behavioral Therapy
For the study, 226 men and women diagnosed with generalized anxiety disorder were assigned to one of three groups: cognitive behavioral therapy, Kundalini yoga or stress management education, which served as the control group. The cognitive behavioral therapy group were given information about anxiety disorders and talk therapy designed to help them identify the negative thought patterns contributing to their anxiety and develop better responses to stressful situations. They also learned muscle relaxation techniques.

The yoga group was given training in Kundalini yoga, a popular form of yoga which involves yoga poses and relaxation exercises. They also received instruction in yoga theory, mindfulness and meditation.

Those in the stress management control group learned about the negative physical and psychological effects of stress and the benefits of healthy lifestyle behaviors such as quitting smoking and reducing alcohol consumption as ways of reducing anxiety. This group was also provided with educational material about stress, nutrition and lifestyle to use at home.

Medications such as antidepressants and benzodiazepines can also help. But not everyone wants to take medication.

There were four to six participants in each group, with two instructors per group, no matter what the form of instruction. All groups met in weekly two-hour sessions over a 12-week period, and they were assigned 20 minutes of homework per day every week.
ADVERTISEMENT
After the 12 weeks, cognitive behavioral therapy and Kundalini yoga were significantly more effective at reducing anxiety. Among those who received cognitive behavioral therapy, 71 percent had meaningfully improved symptoms of anxiety compared to 33 percent of those in the stress management group. And 54 percent of those who practiced Kundalini yoga had meaningfully improved anxiety symptoms.

After six months of follow-up, cognitive behavioral therapy still significantly improved symptoms of anxiety compared to stress management. However, yoga practice was not as effective long-term. “At least over the short-term, there is significant value for people with generalized anxiety to give yoga a try and see if it works for them. Yoga is well-tolerated, easily accessible, and has a number of health benefits,” Naomi Simon, lead author on the study, said in a statement. These findings suggest cognitive behavioral therapy may have more robust, longer-lasting effects as an antianxiety treatment compared to yoga.

“We need more options to treat anxiety because people will respond differently to interventions, so more options will help overcome barriers to treatment,” said Simon, a professor of psychiatry at New York University’s Grossman School of Medicine. “If more effective treatments are available, people with anxiety will be more likely to seek evidence-based care.”

The researchers — from NYU, Boston University, Southern Methodist University, Harvard Medical School and Georgetown University Medical Center — hope future studies will look at other forms of yoga practice and possibly determine who is most likely to benefit from yoga, so patients’ anxiety treatments can be personalized.

RELATED STORIES
Putting Mindfulness To the Test
Yoga, For Body And Brain
A Global Look At Anxiety
LATEST NEWS