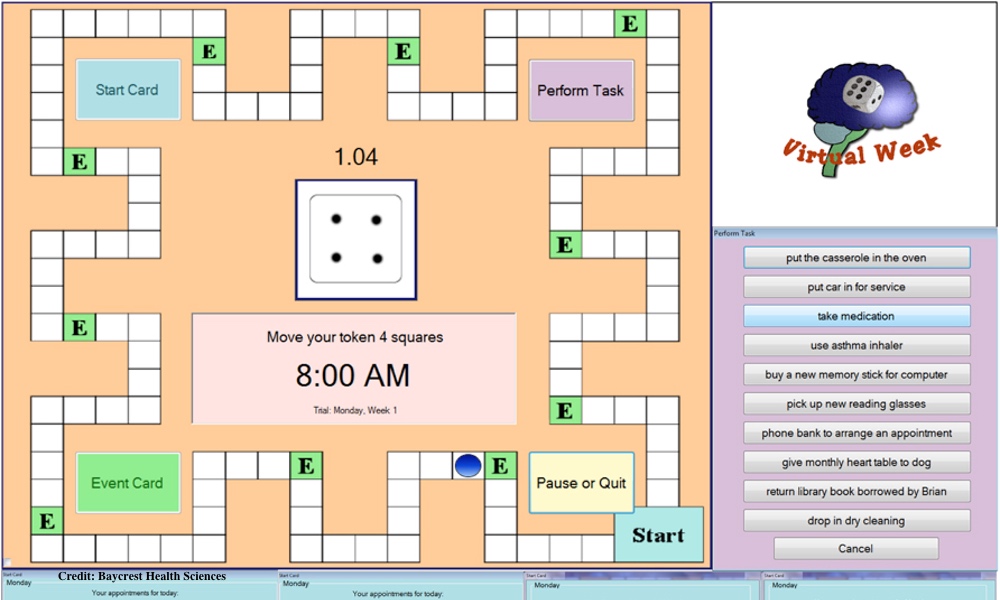 A Game To Help Seniors Remain At Home

Who hasn't forgotten to return a phone call, bring home a carton of milk or even to walk the dog? Lapses in this type of memory, also called prospective memory — the ability to perform the actions you're supposed to perform — increase as you age. When these memory lapses worsen to the point where people forget to take their medication or prepare food or perform other daily chores, it can spell the end to independent living.

Just like in the real world, there are many different tasks to remember each day. Some have to be performed at a specific time of day.

In a study older adults who played Virtual Week for a month showed improvements in memory and other abilities needed to perform the tasks of everyday living.
ADVERTISEMENT
The game is a little like monopoly. You move around a board according to a roll of the dice.

Each trip around the board is one virtual day. During that day, you have to perform different tasks, such as taking a pill or returning a library book. Simple enough, but just like in the real world, there are many different tasks to remember each day. Some have to be performed at a specific time, some when passing a green square, while are determined by the card the player has drawn. It takes a well-organized memory to remember everything and get them all done.

There are 24 game levels and the difficulty increases at higher levels. The clock, which has always been visible, will disappear, so now you have to click on a button whenever you want to check the time. Actions that have always been performed at the same time of day, such as taking a pill at breakfast and dinner, might change to taking that pill at noon, 4pm and 8 pm. And so on.

The study followed older adults who played the game for a month. It also compared the performance of players to people who received music training and others who received no training at all.

Seniors who played the game for a month nearly tripled the amount of tasks they were able to perform correctly (remember) in a virtual day. This didn't translate into an improvement in laboratory tests of their prospective memory. But it did produce some observable real world gains.

ADVERTISEMENT
Those who played the game showed substantial improvement in the call back task, a task where they had to make four different phone calls from their home to the laboratory at precise times without the aid of a timer. And players also showed improvements on the Timed Instrumental Activities of Daily Living that measures their ability to quickly and correctly perform several tasks that range from reading labels from medicines and food cans to finding telephone numbers.

None of these real world gains was seen in those who took the music lessons or underwent no training.

While Virtual Week is not yet commercially available, you might want to keep an eye out for it. The dog will thank you.

For more details, you can see the article, which is freely available, in Frontiers in Human Neuroscience.