"Time is Brain": Treating Stroke as an Emergency


If oxygen-rich blood is blocked from reaching the brain, brain nerve cells will die, producing damage and disability we call "stroke." Not too long ago, the treatment for most types of stroke was passive — wait for it to be over and then manage the consequences. With this approach, most stroke victims simply died. Those who survived faced the challenge of years of rehabilitation and, often, permanent brain damage or other disability. Today, however, there are several new treatments available that help to restore blood flow to the brain and, as a result, minimize damage.


What is a Stroke?
A stroke happens when blood flow to the brain is blocked by a blood clot in a brain artery or because a brain blood vessel has burst. Obstruction is the more common cause. Stroke symptoms include headache, mental confusion, inability to speak, loss of consciousness and paralysis.

When a stroke occurs, part or all of the brain is deprived of oxygen. Without oxygen, affected nerve cells in the brain stop functioning and begin to die within minutes. This is a disaster for the body because dead brain cells cannot be replaced. Because the brain controls the rest of the body, the death of certain brain cells often means a loss of functioning elsewhere.

Stroke affects 700,000 people annually in the US. It is the third leading cause of death and the number one cause of long-term adult disability.


A New Treatment and Timetable
In 1996, stroke treatment changed dramatically when the FDA approved the use of a new drug called tissue plasminogen activator, or tPA, to treat stroke. tPA immediately dissolves the blood clots that cause many strokes, drasically reducing the amount of damage strokes produce. Since then, several other drugs have been developed that are similar to tPA. These include r-tPA, streptokinase, urokinase and prourokinase. Together they are known as thrombolytic drugs from the Ancient Greek word, thrombolysis, meaning "clot-dissolving."

The faster stroke victims are treated, the less damage to the body and, especially, to the brain.

Thrombolytics, however, only work if delivered directly into the bloodstream, either through a vein or an artery (intra-arterial). Both are complicated processes, especially intra-arterial treatment, which involves assembling a medical team and performing an elaborate test called cerebral angiography. Most importantly, these drugs must be administered within a few hours of the stroke before the oxygen-deprived nerve cells suffer permanent damage. Emergency rooms and emergency medical services have to work quickly because "time is brain." In other words, the faster stroke victims are treated, the less damage to the body and, especially, to the brain.

If a loved one or friend suffers a stroke, you need to make sure that he or she gets to the hospital as soon as possible. The time window for getting the best results from thrombolytic drugs is three hours from the first signs of stroke.


Treating Stroke with tPA
The FDA's approval of tPA in June 1996 was a major advance in stroke management. tPA works by traveling through the bloodstream to the clot or other blockage; it then dissolves the material causing the obstruction and allows blood flow to resume. The result is that far less brain tissue is deprived of oxygen and victims suffer less damage. But tPA and other thrombolytics can cause increased bleeding. This is the reason that they are never used to treat strokes that result from burst blood vessels.

Studies demonstrated that patients given intravenous tPA within three hours of suffering a stroke were far better off three months afterward. Later studies showed that while 10-20% of all stroke victims could benefit from tPA, only 1-2% are actually getting it, or getting it in time.

Today, the medical community has been gradually adjusting to view stroke as a true emergency. As in any other profession, it has proven to be a difficult and frustrating task to change long-standing beliefs and attitudes. Extensive efforts are needed to educate medical professionals, from physicians to EMS personnel, as well as the general public, about stroke awareness.

Part of the difficulty is that in order to provide state-of-the-art stroke treatment, hospital emergency rooms and stroke treatment centers need to build a multidisciplinary support network including emergency medicine, primary care, neurology and radiology. This requires a great deal of time, money and effort.


Other New Stroke Treatments
Researchers are now studying a variety of other stroke treatments that may, alone or in combination with each other or with thrombolytics like tPA, further improve the outcome for those who suffer stroke. Some of these are:


Intra-arterial Treatment
In this experimental treatment, clot-dissolving drugs are given directly through an artery (See Figure 1). 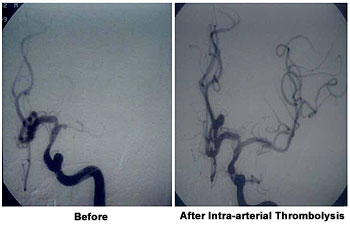 In this angiogram, an artery in the brain (left middle cerebral) is blocked. When clot dissolving medicine is injected directly into the artery, combined with mechanical clot disruption, blood flow is restored.


A significant drawback of intra-arterial therapy is that it much more difficult, compared to IV tPA, for the medical staff as it requires additional time because an angiography team or transfer to a special center may be needed. Time, of course, is of the essence in treating stroke. Right now, it is too early to say whether or not intra-arterial treatment will prove to be worthwhile.


Endovascular Rescue
Endovascular therapy involves repairing the damaged blood vessel by inserting a device called a stent which keeps the artery open (See Figure 2). Stents have been used with much success for heart arteries but positioning them in the brain arteries is much more difficult. Brain stenting is attractive because blood flow is restored without the risk of bleeding that is associated with thrombolytic medicines. We believe it may especially effective for those patients who are likely to have bleeding problems — patients with very high blood pressure and patients who have recently had an operation. 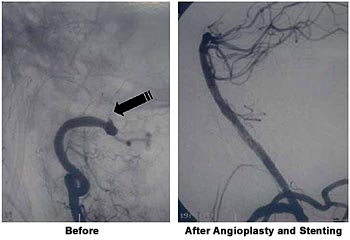 Angiography revealed a brain artery that had been blocked for almost 10 hours. Because the stroke occurred so many hours ago, thrombolytics could not be used. Instead, a stent was inserted and blood flow was restored.

Antiplatelet Therapy
Antiplatelet therapy is one of the mainstays of stroke prevention. They work by impairing the ability of the blood to clot, thereby reducing the chances of a blood clot forming and causing a stroke. In addition to aspirin, there are several new antiplatelet agents.

Aspirin is the oldest antiplatelet medication and still the most frequently prescribed. The most effective dosage of aspirin for stroke prevention has long been a subject of debate among neurologists. No single trial has established the optimal dose (the usual range is 81-325 mg per day) of aspirin but several studies strongly suggest that dosage may not, in fact, matter very much.. Other antiplatelet drugs include ticlopidine, clopidogrel and dipyridamole (Aggrenox®). Sometimes, one or more of these drugs is used in combination with another therapy, such as endovascular rescue. For example, aspirin plus extended release dipyridamole has clearly been shown to be more effective than aspirin alone for preventive purposes.


Summary
Based on what we know now, the best short-term treatment for stroke caused by an obstruction is intravenous t-PA. However, this must be done as soon as possible, certainly within the first three hours of the first stroke symptoms.

If you, a friend or family member suffers a stroke, the most important thing that you can do is to make sure that evaluation and treatment begins as soon as possible. Before a crisis occurs, you may want to investigate whether hospitals and emegency services in your community are equpped to give state-of-the-art stroke treatment, and, if necessary, advocate for improvement.

Thrombolytic drugs such as tPA have revolutionized the treatment of stroke by giving doctors a way to intervene and limit the damage done by a stroke. In the next few years, we can expect to see the development of more and better short-term stroke therapies, as well as antiplatelet drugs and other treatments to deal with stroke prevention and the aftermath of stroke.