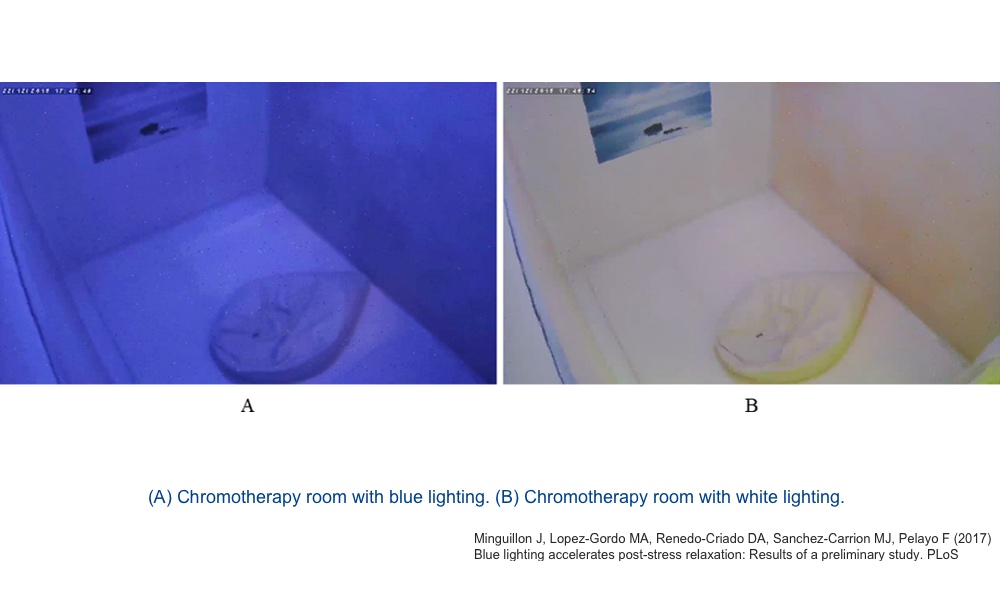 Neil Wagner
People under stress calm down over three times faster when they are exposed to this type of light.

Light and color can both affect mood, but we know a lot more about light than color. Exposure to bright white light is now a standard treatment for people suffering from seasonal affective disorder, a type of depression. But research on the effect of color has been less illuminating.

Now a small pilot study has found that people recover from stress a lot quicker in a room with blue light than in one with regular white lighting. This finding, if verified, could have many practical applications.

People calmed down a lot quicker under blue light, but it may be the absence of red wavelengths that really makes the difference.

In the study, people were put under stress by being asked to do mental arithmetic. The Montreal Imaging Stress Test makes you do math in your head and is very good at creating stress. It first tests your math abilities and then it sets the math problems just a bit harder and faster than your capabilities in the actual test. If that wasn't enough, it also tells you that your performance is being monitored and may even show you how poorly you are doing as the test progresses.
ADVERTISEMENT
People had electrocardiogram (ECG) and electroencephalograph (EEG) readings (heart and brain monitoring) taken throughout the study, which took place in a school.

People calmed down a lot quicker under blue light. The ECG and EEG readings showed it took only about a minute for participants to grow calmer under blue light, as compared to 3.5 minutes under white light. And the study subjects agreed — 83 percent reported that the blue lighting was significantly more relaxing than white light.

If these results are confirmed in larger studies they could have some very practical applications. Blue-lit rooms could be used in schools, where violent or agitated students would benefit from calming down quicker. At work or home during stressful situations, for example, adjusting the light color might help. It might even be worth keeping in mind when choosing paint colors for the rooms you inhabit.

The wavelength of the blue light used in the study was 471 nanometers, as shown at the top of the page. The blue light itself isn't the likeliest cause of the calming effect, the researchers say. That's because the lighting in the room comes from red, blue and green LEDs. White lighting is when all three colors of LED are on, so it contains the exact same blue light as when the room is lit blue. The researchers suspect it's actually the absence of green and/or red light, which is known to amp up our reaction time, that is responsible for the faster calming, though that's beyond what this particular study can show.