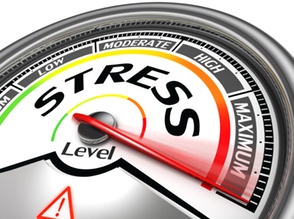 How Stress Messes with the Brain

Alice G. Walton
Chronic stress can wreak havoc on the mind. Now we understand what it’s doing to the brain.

Stress can make you like a deer in headlights — you feel blank, dazed and distracted, unable to react. It hasn’t been totally clear why stress can lead to psychological symptoms like forgetfulness and numbness, but researchers are starting to get a better handle on it.

It appears that there may be a specific brain mechanism that explains why neurons are so taxed when they’re under stress. Stress can literally turn your brain into a barren wasteland.

Swiss and Polish researchers looked at the area of the brain that is a big player in learning and memory, and known to be affected by stress and depression, the hippocampus.

ADVERTISEMENT
When they studied the hippocampi of stressed rats, they discovered that the level of a certain protein, nectin-3 cell adhesion protein, was reduced.

The findings may eventually influence the treatment of anxiety and depression or the effects of chronic stress.

The protein plays a role in cell-to-cell communication. It helps connect neurons to each other, creating a synapse as they communicate. When the levels of this protein molecule are reduced, the brain’s ability to form new connections and learn new information, its synaptic plasticity, is greatly diminished. It is as though the brain has dropped back from a high speed Internet connection to a low-speed dial-up connection.

This may explain why stress brings the blankness, numbness, the forgetfulness.

ADVERTISEMENT
A Cascade of Events
There appears to be a cascade of events behind the loss of nectin-3 cell adhesion protein. Researchers also discovered that under stress, large amounts of the neurotransmitter glutamate are released and bind to NMDA receptors, which play a role in memory.

These events cue the activation of an enzyme, MMP-9, which then chops the nectin-3 cell adhesion protein in half.

“When this happens, nectin-3 becomes unable to perform its role as a modulator of synaptic plasticity,” said lead author Carmen Sandi in a news release.

The Fallout from Stress
ADVERTISEMENT
The fallout from this loss of synaptic activity and plasticity is reduced cognitive capacity and memory. It also results in a loss of the desire to be social. And this is what the team saw in their rats.

Even more telling was what happened when the researchers either activated nectin-3 adhesion protein or inhibited MMP-9. The stressed rats, who had become less social and more cognitively impaired, rebounded — and their symptoms went away.

The findings may eventually influence the treatment of anxiety and depression or the effects of chronic stress. Though there are medications that are effective for treating depression in some people, they do not work for everyone.

This loss of synaptic activity and plasticity reduces cognitive capacity and memory. It is as though the brain has dropped back from a high speed Internet connection to dial-up.

Anxiety medications are notoriously addictive and therefore not intended for long-term use. Researchers have been seeking more effective treatments for anxiety and depression, and understanding the brain mechanisms involved in the stress anxiety causes is key.

More research will obviously be needed before new medications are developed. But each new study helps researchers gain more insight into what’s going on in the brain when depression and stress take over — and what might be done to undo it.

The study was carried out at the Brain Mind Institute and published in Nature Communications.