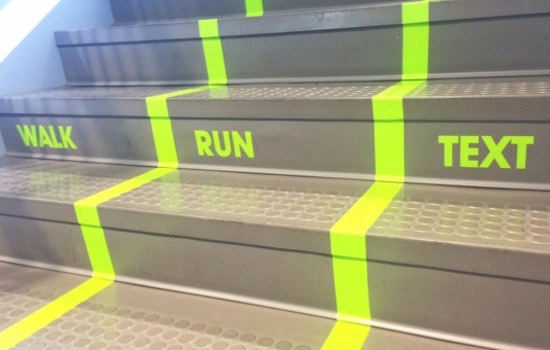 Life in the Texting Lane

Neil Wagner
The texting lane one university installed on its stairs was all in fun, but not everyone sees it that way.

Utah Valley University has installed texting lanes on the stairs in its Student Life and Wellness Center. Is it a joke or a sign of the end of society as we know it? That depends on who you ask.

But there's certainly no shortage of opinions.

According to a statement by Matt Bambrough, the university's creative director, “The design was meant for people to laugh at rather than a real attempt to direct traffic flow.” But the reason the photo has gone viral isn't just because it's funny. It has hit a nerve.

While bumping into someone who stops to read or send a text could spawn a whole new generation of love stories, there are much likelier ways to find a significant other. These collisions or near-collisions are usually irritating, and society is still working out who has the right of way.

The reason the photo has gone viral isn't just because it's funny. It has hit a nerve.

Bambrough admits this. “When you have 18- to 24-year-olds walking on campus glued to their smartphones, you’re almost bound to run into someone somewhere; it’s the nature of the world we live in.” In fact, part of the purpose of the stairway was to engage the students and catch their attention.

It certainly caught somebody's attention. People have sent thousands of tweets about the staircase, many of which have praised it as innovative and asked their own schools or cities for something similar. Some have asked San Francisco to add texting lanes to its BART stairways and platforms to wondering how texters will even be able to see the lanes if they're busy texting, tweeters are taking this quite seriously.

And the National Safety Council just sent out a press release warning that distracted walking injuries are on the rise, though the release notes that over half of these injuries occur at home.

Still, it's hard not to see the humor in the situation. And the fact that most students aren't even following the lane instructions argues against taking the idea too seriously.