How Everyday Products Make People Sick, Toxins at Home and in the Workplace 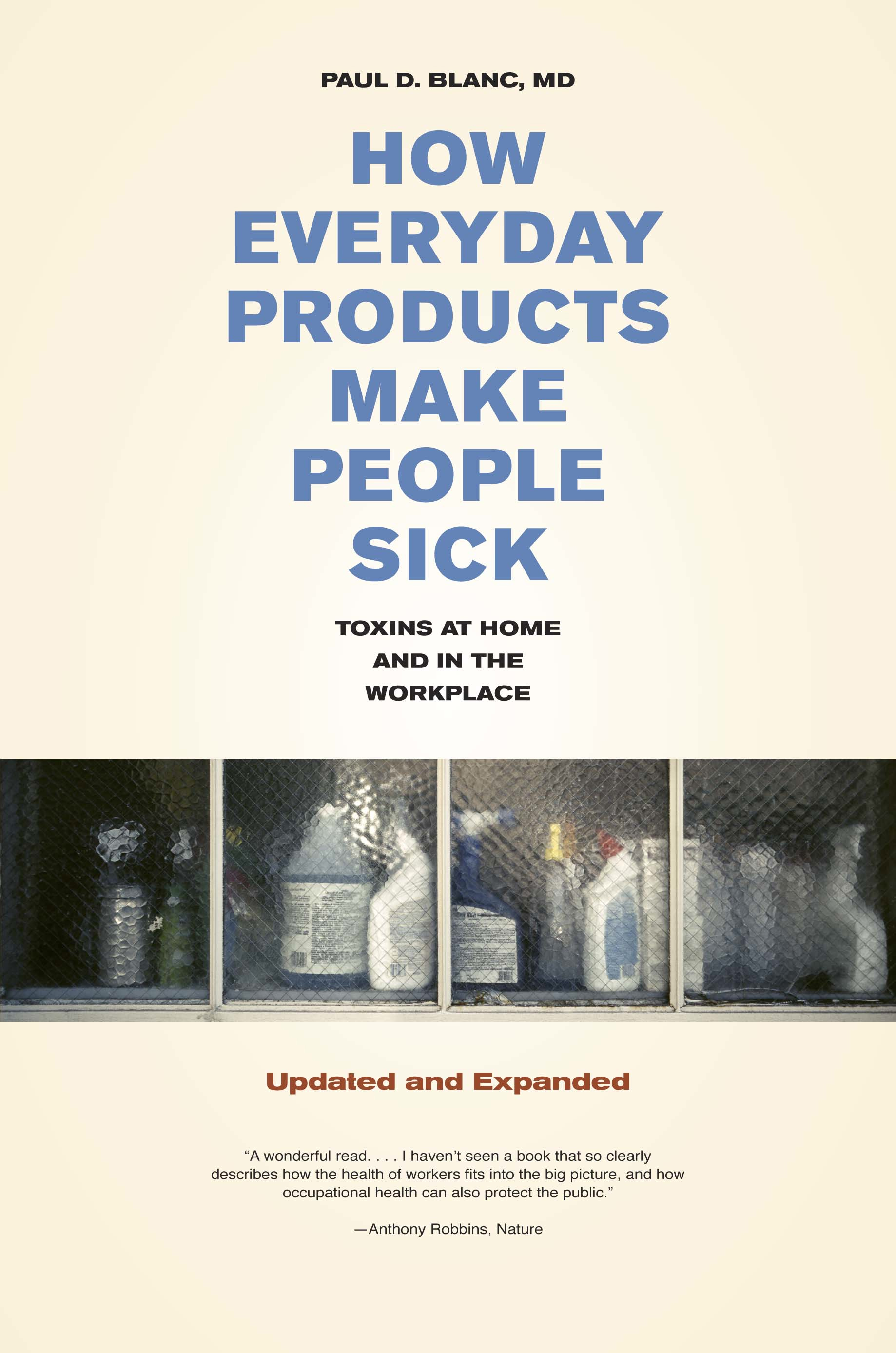 Paul D. Blanc, MD, MSPH is a Professor of Medicine and Endowed Chair in Occupational and Environmental Medicine at the University of California San Francisco's School of Medicine. In How Everyday Products Make People Sick, Toxins at Home and in the Workplace he documents the history of environmental toxins, dangerous chemicals that are often the by-products of what we like to think of as progress.

Along the way he reveals just how long people have been dying from everyday exposure to toxic substances. In 1909, for example, three factory workers, girls just 14 years old, fell ill with skin hemorrhages and low platelet counts. Two died. One survived. The cause? A particular kind of glue:

"[T]he three stricken all worked in the same small room… operating special coating machines. The coating machiness sealed the cans rather than soldering them. The sealant was a mixture of rubber, natural resin, and benzene… This was the first medical report in the United States of benzene-caused toxic aplitic anemia, a disease wherein the bone marrow fails to produce enough of any of the critical blood cells needed by the body."

Dr. Blanc goes on to detail how the solvent benzene continued to cause work-related deaths in factories during World War I and World War II and later in PVC polymerization factories. In 1989 – 80 years later – the Environmental Protection Agency (EPA) determined that benzene was a toxic air pollutant that might need to be regulated. In 1999, benzene was found, in minute amounts, in bottles of Perrier.

How Everyday Products Make People Sick is therefore also a portrait of the governmental and regulatory inactivity that makes it possible for dangerous substances to remain on the market.

ADVERTISEMENT
Here is an excerpt (pp. 216-217) on a lung disease discovered among popcorn factory workers in 2001 that actually had been around since the 1950s:
From Chapter 7: Emerging Toxins
The New Terror

On 3 October 2001, the New York Times ran an article in its Living Arts section on the history of popcorn: "An Old-Fashioned, Versatile Treat." On the same day, the Wall Street Journal reported an outbreak of lung disease among workers in a Jasper, Missouri, popcorn factory. This outbreak involved no simple pneumonia. The lung condition in question, bronchiolitis obliterans, is a rare, life-threatening syndrome of progressive destruction of the airways. Attention was drawn to the Gilster–Mary Lee Corporation factory when several employees all developed this same uncommon syndrome. Of even greater concern, the suspect production process was far from a high-tech operation. Gilster–Mary Lee made microwave popcorn. The causative exposure was to an ingredient called diacetyl, previously presumed to be an innocuous, artiﬁcial butter-ﬂavoring agent.

Bronchiolitis obliterans is an idiopathic condition, a medical designation for a disease whose initiating cause cannot be determined. Prior to the popcorn-related outbreak, however, other known toxic-chemical links to the disease occurred. Some of the very earliest medical reports on bronchiolitis obliterans documented that it could closely follow the inhalation of nitrogen dioxide, a potent irritant gas. Nitrogen dioxide is a common by-product given off by decaying vegetable matter; agricultural workers can be at especially high risk. Among farmers, nitrogen dioxide poisoning is known as silo-ﬁller’s disease. Silo-ﬁller’s disease came to the fore in the 1950s, with the use of nearly airtight, enclosed metal feed silos for corn silage raised with high nitrogen content fertilizers, conditions highly effective in producing toxic gas. Farmers who unwittingly entered silos in the ﬁrst few days after ﬁlling were sometimes overcome.

In 1997, a few years before the outbreak of microwave popcorn lung, another new lung disease was ﬁrst reported in a Rhode Island–based factory in which textile workers inhaled nylon ﬁbers. Dust levels were high, but the nylon particles were considered little more than an inert nuisance. This proved not to be the case. Technological innovation had allowed the production of exceedingly ﬁne nylon particles to be used for a new synthetic "ﬂock" textile. Additional ﬂock lung cases were linked to the same exposure in four different plants in the United Sates and Canada.7 Recently other synthetics have also caused disease.

Emerging toxins are not limited to factories or farms. In 1992, for example, reports began to emerge of a chemical pneumonia caused by use of Wilson’s Leather Protector, an over-the-counter aerosol leather spray. The outbreak was linked to a newly marketed ﬂuorocarbon contained in a revised formulation of the spray. The product was recalled. Less than a year later, a second outbreak occurred in the United States from the use of Magic Guard, another reformulated leather spray. As recently as 2003, sporadic pneumonia cases were still being linked to similar products newly introduced into the European market, and a new U.S. outbreak occurred in 2005–2006.