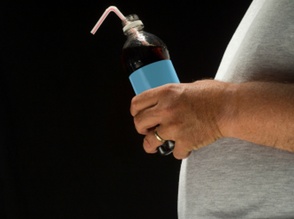 What's In Your Soda?

Beth Fontenot, MS, RD, LDN
When we can't trust the labels on our soft drinks to report sugar content accurately, it spells trouble.

When you drink a can of regular soda, regardless of the brand, you are downing the equivalent of eight cubes of sugar or 136 calories. All those empty calories are reason enough to go easy on sodas, but new information suggests that the type of sugar in these soft drinks could be even more reason to back away from them. In other words, sodas are even worse for us than we think.

Sugar by Another Name May Not Be the Same

Soft drinks and other beverages contain much more harmful sugar — fructose — than the labels on the cans or bottles indicate. Fructose is the sugar found naturally in many fruits and vegetables, but it is very different from other sugars because it is not the preferred energy source for muscles or the brain and is only metabolized (broken down) in the liver.

The most important sugar is glucose, the body’s preferred energy source. Glucose, or blood sugar, circulates in the blood. Most of the carbohydrates you eat into are processed by the body into glucose, either to be used immediately for energy or to be stored in muscle cells or the liver as glycogen for later use.
ADVERTISEMENT

Sucrose is table sugar. It is a disaccharide made up of the monosaccharides glucose and fructose. When you digest sucrose, enzymes separate it into glucose and fructose. The body responds to the glucose content of the meal in its usual manner; however, when fructose is being digested and taken up at the same time, the body will use glucose as its main energy source and the excess energy from fructose, if not needed, will be poured into fat, stimulated by the insulin released in response to glucose.

Most of the sugar found in soda and other commercially-sweetened products isn't glucose, but rather high fructose corn syrup (HFCS), a combination of glucose and fructose.

The trade group that represents HFCS producers, the Corn Refiners Association, claims that HFCS is just slightly different from sucrose (table sugar), which is comprised of equal parts of glucose and fructose. They say that “sugar is sugar.” However, the study’s analysis of drinks made with HFCS showed a fructose to glucose ratio of 60:40, much higher than the 50:50 ratio found in sucrose, which means that our sweeteners are setting us up for weight gain and the metabolic changes that can make us more prone to diabetes, cardiovascular disease, and liver disease.

ADVERTISEMENT
The Study
Researchers at the Childhood Obesity Research Center (CORC) at the University of Southern California's Keck School of Medicine examined the composition of 34 popular beverages. They found that popular drinks like Coca-Cola, Mountain Dew, Sprite, and Dr. Pepper, which are all made with HFCS, contained 50 percent more fructose than glucose.

Unlike glucose, which serves as fuel for the body, fructose is processed almost entirely in the liver where it is converted to fat.

“We found what ends up being consumed in these beverages is neither natural sugar nor HFCS, but instead a fructose-intense concoction that could increase one's risk for diabetes, cardiovascular disease and liver disease,” said Michael Goran, Ph.D., director of the CORC and lead author of the study in a statement.

“The human body isn't designed to process this form of sugar at such high levels. Unlike glucose, which serves as fuel for the body, fructose is processed almost entirely in the liver where it is converted to fat.”

Product labels don’t always accurately state the fructose content. Although the label on Pepsi Throwback indicated, for example, that it is made with real sugar, or sucrose, it actually contained, according to the researchers, over 50 percent fructose. Other beverages with more fructose than indicated on the label included Sierra Mist, Gatorade, and Mexican Coca-Cola, which suggests that HFCS may be present but not disclosed on the labels.

So consumers are getting more fructose and its metabolic problems than they expect.

Given that Americans drink 45 gallons of soda a year, it's important for us to have a more accurate understanding of what we're actually drinking, including specific label information on the types of sugars.

HFCS is an inexpensive sweetener that has become an increasingly popular food additive in recent decades. Some have pointed the finger at it as the driving force behind the obesity crisis. It is less expensive and sweeter than regular table sugar (sucrose), and it is found in nearly every processed food and sugar-sweetened beverage on the market.

Americans consume more HFCS per capita than any other country's citizens, and over the past thirty years consumption has doubled. During the same time period, the incidence of diabetes has tripled, with much of the increase linked directly to sugary beverages like sodas, sports drinks, and energy drinks.

“Given that Americans drink 45 gallons of soda a year, it's important for us to have a more accurate understanding of what we're actually drinking, including specific label information on the types of sugars,” said Goran.

The study is published in Nutrition.