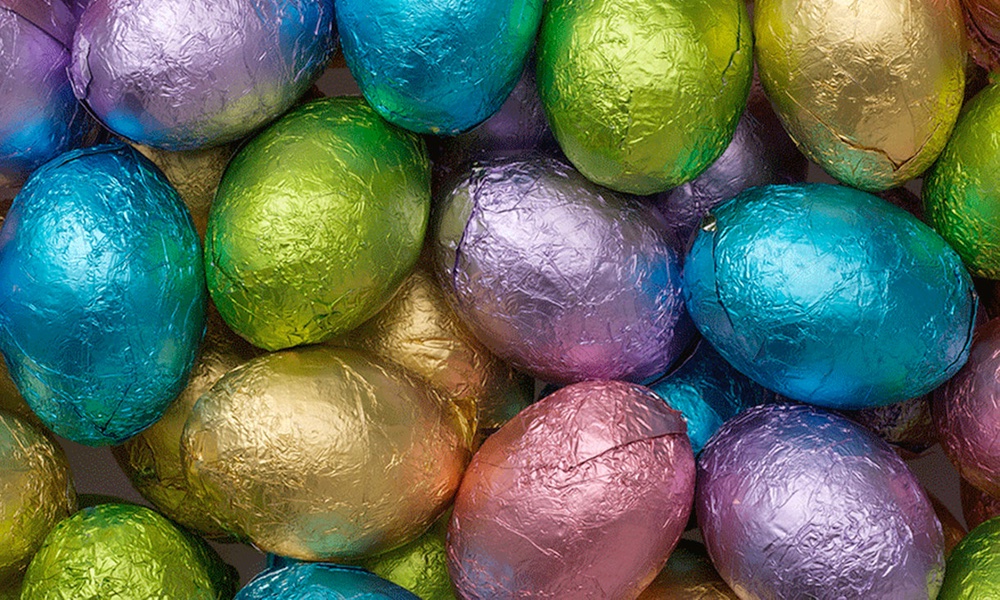 Mountainous displays of chocolate Easter bunnies and eggs are hard to resist. What happens when the displays, not the candy, are removed?

With Easter just around the corner, jelly beans, filled Easter eggs, Peeps and chocolate bunnies have been prominently on display throughout grocery stores, tempting you and your kids at every turn.

What if unhealthy foods weren’t given such big displays? Would buyers’ purchase fewer sugary treats? Two new studies from the University of Oxford published in PLOS Medicine looked at these questions.

Three major grocery chains took part in the first study. Researchers examined the availability, placement, promotions and signage of healthy foods. Often they are off in a section by themselves. By making high calorie candies and snacks less visible, healthier options became more of an option. For example, low fat chips were placed next to the regular chips, and stores increased the stock of lower calorie cookies. As a result, sales of regular chips fell by 23 percent and sales of lower calorie cookies increased by 18 percent.

In the stores that removed displays — but not the candy — during the Easter season, nearly 10 fewer pounds of candy were sold.

The second study involved the removal of seasonal chocolates and candy from prominent locations such as the store entrance and the end of aisles in 34 stores of a major grocery store chain during the seven weeks before Easter. Though the candies were still available, they just weren’t placed in free-standing promotional displays so easily visible and accessible to customers.
ADVERTISEMENT

Candy sales were lower than usual in the 34 stores during the Easter season, increasing by only five percent compared to 18 percent in stores that actively promoted Easter candy. In the stores that removed displays — but not the candy — during the Easter season, nearly 10 fewer pounds of candy were sold. More importantly, fewer calories were going home in customers' grocery bags.

New legislation has been proposed in England that restricts the promotion of foods high in sugar, salt and saturated fat in eye-catching locations in grocery stores.

“These results from a ‘real world’ intervention provide promising evidence that the proposed legislation in England to restrict promotions of less healthy items in prominent locations may help reduce over-consumption,” study author, Carmen Piernas, said in a statement. She qualified this by adding that the influence toned-down promotions for certain food items have on consumer shopping behaviors may decrease with time. The impact on grocery stores’ bottom lines also may not be sustainable over longer periods either.

You can plan to resist temptation even when faced with big displays of candy and chocolate. Catch yourself as you reach for the Easter goodies and remember it’s a ploy for your money and your health. Your choices will also give your children the message that they shouldn't overindulge in treats that do nothing good for the body, no matter how good they taste. It will probably work best if you try to be reasonable — let your kids choose one or two treats of a modest size.