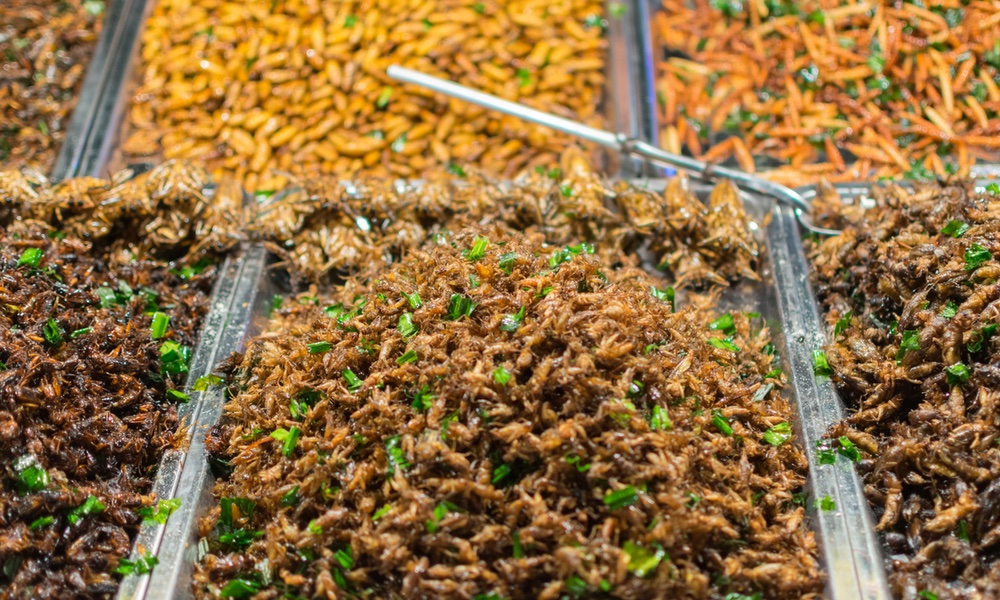 If you're fed up with all the added fat, salt and sugar that are in your food, you might be interested in knowing about an entirely different type of food additive: cricket flour. It's packed with protein, high in B12 and, unlike most high-protein foods, is also high in fiber.

Not quite what you had in mind? Well, the idea can take some getting used to. But there are several reasons you might want to look into it, according to a research study published in JAMA, the Journal of the American Medical Association, on insects as an alternative to beef or poultry.

For Joel B. Mason, a gastroenterologist and cancer researcher at Tufts University, it was the idea that cricket flour could help people cut their risk of colorectal cancer that first drew his attention. Eating processed meat, such as cold cuts and sausage, is a known risk factor for colon cancer. Swapping edible insects, possibly as cricket flour, could cut down on that risk.
ADVERTISEMENT
Over two billion people worldwide regularly eat insects, but there hasn't been that much research done on the nutritional, environmental and medical pros and cons.
Packed with Protein, Environmentally Friendly

Insects in general and crickets in particular have a nutritional profile that's similar to meat. Raising insects is much more environmentally friendly than meat or poultry production, a United Nations Report found.

It would take a lot of crickets to match the poundage of a black angus steer, however, so to address the problems that are likely to be associated with large-scale cricket farming, as well as the many other issues surrounding increased insect consumption, Mason teamed with colleagues from academia, industry and government to form TOPIC — the Tripartite Organization for the Promotion of Insect Consumption.

The breakfast containing cricket power increased the amount of one beneficial gut bacterium by over five-fold.

Among the questions TOPIC hopes to answer are whether substituting cricket powder for meat actually does lower people's risk of colorectal cancer and even more basic questions, such as how Westerners' aversion to eating insects — The Yuck Factor — can best be overcome.

Valerie Stull was 12 when she ate her first insect, a fried ant. She was surprised at how good it tasted. Stull is a Postdoctoral Research Associate at the University of Wisconsin-Madison's Global Health Institute and a member of TOPIC. She and her colleagues published a 2018 pilot study looking at the effects of cricket consumption on the body's gut bacteria.

Pumpkin Spice
The study compared the effects of eating a pumpkin spice muffin and chocolate shake breakfast containing 25 grams of cricket powder to the effects of eating the same breakfast without the cricket powder. For two weeks, half the people in the study ate one of the breakfasts, then after a two week timeout, switched to the other type of breakfast for two weeks.
ADVERTISEMENT
The cricket powder was well-tolerated. People in the study reported no significant side effects, and the breakfast containing cricket power increased the amount of one beneficial gut bacterium by over five-fold. Gut health relies on the interplay of hundreds of different species of bacteria and can't be measured based on the status of a single one; so it is encouraging that after 14 days the cricket-enhanced breakfast did not dramatically alter people's overall gut bacterial profile.

Edible insects may act as a prebiotic that boosts the amount of good bacteria in the gut, Stull says. This could lead to various health benefits, but it will take further study to find out more definitively.

Crickets may be uniquely suited to overcome the Yuck Factor that surrounds most insects — just ask anyone familiar with Pinocchio. But they're not the only insects suitable for dining. A wide variety of edible insects and insect products are already available on the web. You'll never know what gastronomical delicacies you're missing out on unless you look.

Fitness
Walk, Don't Saunter
Walking together makes couples healthier and happier. To get the biggest health boost, however, keep up the pace -- and don't hold hands.