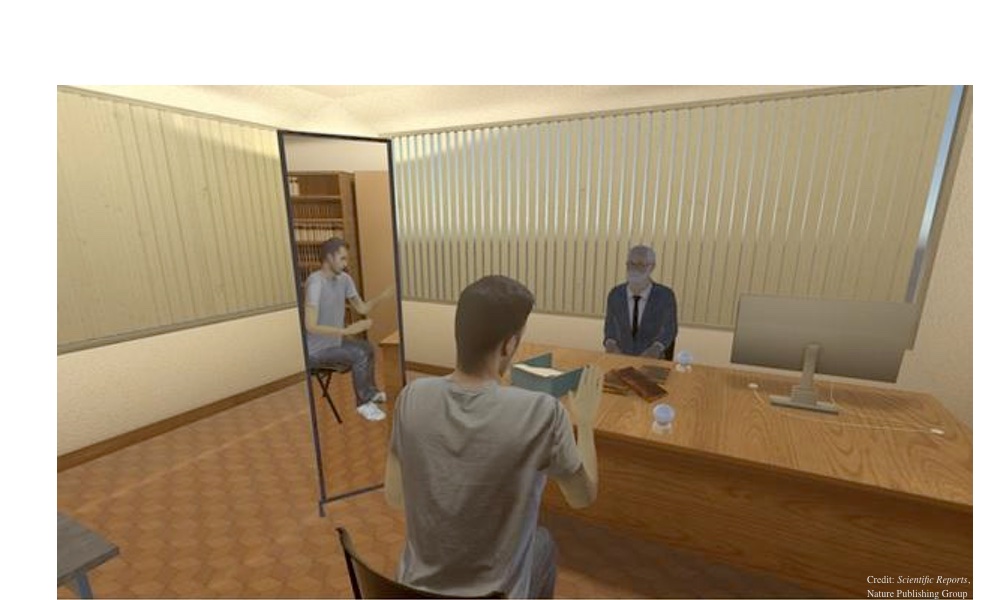 Neil Wagner
Virtual reality is proving to be a useful way to deliver therapy. It's the perfect way to see yourself in a new light.

Virtual reality is uniquely suited to the task because you're usually in a very different virtual body, one you can look down and see. And if there are mirrors in this virtual world, you can even see your new face. That's visual evidence that you are now someone else.

Mel Slater heads the Event Lab at the University of Barcelona, where computer science and psychotherapy intersect. An area the lab has been investigating is how virtual reality can make counseling more effective. One conclusion they've drawn is that changing bodies really does change the mind.

Swapping virtual bodies offered people a chance to temporarily be a different person and, at least in this study, it helped deliver new insights.

Their latest research gets an assist from Sigmund Freud. People with a personal problem that was causing them a moderate amount of stress entered a virtual world in which they either spoke to a scripted image of Sigmund Freud about their problem or actually swapped bodies with a virtual Dr. Freud, switching back and forth between their own virtual body and Dr. Freud's so they could hold both sides of a conversation with him.

Those who swapped bodies had much better results. One week after the experiment, 86 percent of the body swapping group reported a change — doing, feeling or thinking differently about their problem. Only 48 percent of the group that spoke to a virtual Dr. Freud but did not swap bodies with him reported this.

“We found that those in the body swapping group got better knowledge, understanding, control, and new ideas about their problem compared to the control group [which had no body swapping],” said Slater, in a statement.

The 38 people in the study had problems ranging from men who felt insecure when talking to women to people with an extreme fear of spiders.

ADVERTISEMENT
A 3D scan was taken of each person so that a lookalike virtual body of them (an avatar) could be constructed. Their virtual conversation began with their avatar describing their problem to a seated Dr. Freud. As the conversation progressed, people would see what they normally would experience during a real world conversation — when they moved their real body, their virtual body would move in the same way at the same time.

For those who swapped bodies, it offered them a chance to temporarily be a different person and, at least in this study, it helped deliver new insights.

The study was done with the aid of a psychologist who helped people condense their problem into a single sentence before they even stepped into the virtual world. It's not clear to the researchers whether or not people could gain new insights by initiating similar VR conversations on their own without such professional guidance.

With VR becoming more popular, people who own personal VR systems will certainly have the opportunity to try a little self-counseling if they so chose. Perhaps a conversation with Mahatma Gandhi, Michelle Obama or Benjamin Spock will make it easier to get a fresh perspective on a personal problem.

For more details, see the study, which appears in the open access journal Scientific Reports.