Wired to Create: Unraveling the Mysteries of the Creative Mind 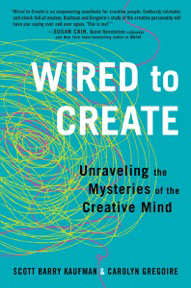 The Habits Of Highly Creative People

Why is creativity seen as such a mystery? It may be because when inspirations strikes, we feel it has come from out of nowhere. But is this really true? Most people involved in creative endeavors will be the first to suggest that creativity is as much perspiration as inspiration. Over time, however, creative people learn what they need to do to nurture their creativity. And now, neuroscientists are starting to figure out the brain states that lead to creativity as well.

In Wired to Create Psychologist Scott Barry Kaufman and Carolyn Gregoire take us inside the “messy minds” of highly creative people. The goal is to help you make creativity more of a habit in your daily life. Each chapter covers one of the attributes and habits of highly creative people: Imaginative Play, Passion, Daydreaming, Solitude, Intuition, Openness to Experience, Mindfulness, Sensitivity, Turning Adversity into Advantage, and Thinking Differently. By discussing these qualities in light of the latest findings in neuroscience and psychology and using examples from artists and innovators throughout history, the authors de-mystify the creative impulse and home in on the practices and habits of mind that promote creative thinking.

Perhaps one reason creativity has been seen as so mysterious because it is paradoxical. Kaufman and Gregoire unpack these paradoxes — like mindfulness and daydreaming, seriousness and play, openness and sensitivity, and solitude and collaboration — and show how embracing our own contradictions can help us to tap into our deepest creativity.

The following excerpt from Wired to Create: Unraveling the Mysteries of the Creative Mind is from the chapter on Mindfulness.

Being mindful alters the very structure and function of the brain, supporting executive functions like attention and self-regulation, both of which are valuable assets to creativity –especially when it comes to motivating ourselves to sit down and focus on a challenging creative task for extended periods of time.

A significant body of research has found mindfulness training to improve key executive attention skills. One of its most valuable benefits of mindfulness training is that it boosts cognitive control, the ability to focus on an important decision while avoiding distractions and impulses. A 2014 study published in Clinical Neurophysiology found that mindfulness-based cognitive therapy was effective in increasing cognitive control among adults with attention-deficit hyperactivity disorder (ADHD), leading to reductions in impulsivity and inattention. Of course, we don’t want to throw out the baby without the bathwater: People with ADHD also tend to show an overactive imagination network. The key is helping them learn the crucial skills of flexible attention, so that they can pay attention to the outside world when they want or need to, while also helping them put their overactive imagination to good use.

Mindfulness training can lead to measurable improvements in the ability to focus and to regulate emotions and behavior even in those who do not suffer from attentional disorders. A 2013 study published in the journal Psychological Science showed that a brief mindfulness exercise before an exam helped students identify distracting thoughts, which lead to improvements in reading comprehension and working memory. Overall, the exercise led to a sixteen-point average boost on the GRE exam, largely by reducing disruptive mind wandering.

Clearly, you don’t have to be an experienced meditator to benefit from mindfulness. As little as a single, short meditation session can have a positive impact on mental functioning. More extensive research conducted on novice meditators who completed an eight-week MBSR course and on experienced meditators who underwent a month-long meditation retreat showed significant improvements in three aspects of attention: alerting (the maintenance of an alert state of mind), orienting (directing and limiting one’s attention to a targeted set of stimuli) and conflict monitoring (the ability to prioritize competing responses).

So what’s going on neurologically when we’re sitting silently and focusing on the breath or a mantra? Scientists have begun to uncover the changes in neurobiology and brain structure underlying the cognitive improvements linked with meditation. A 2011 Harvard study identified some of the main neural correlates of the positive changes brought about by mindfulness training programs. The study found that just eight weeks of MBSR led to increased grey matter density in areas of the brain associated with executive function—specifically, attention, and emotion regulation.

ADVERTISEMENT
First, the researchers saw that grey matter density increased in the anterior cingulate cortex (ACC), a brain region located in the frontal lobe that’s associated with self-regulation, thinking, emotion, rational deliberation, and problem solving. (Interestingly, high levels of media multitasking have been linked with reduced density in the ACC. ) The research team also saw increases in grey matter in the hippocampus, a small region within the limbic system that governs memory, learning, and emotion (and plays a crucial role in the imagination network). Increased activity in the ACC and the ventromedial prefrontal cortex—which is involved in processing risk and fear as well as inhibiting emotional responses—have been implicated in the reduction of anxiety, a well-known creativity blocker. Greater activation in both of these brain areas has been shown to lead to substantial feelings of anxiety relief after a twenty-minute meditation.

In another study, the same group of Harvard researchers later found that eight weeks of MBSR also led to measurable changes in brain regions associated with memory, sense of self, empathy, and stress. A 2014 review of twenty-one neuroimaging studies that examined the brains of over three hundred meditators reinforced these findings, identifying eight key parts of the brain (including the ACC and the hippocampus) that were consistently affected by mindfulness training. The studies reviewed showed that meditation training consistently altered key brain areas, including the frontopolar cortex (involved in meta-awareness), the sensory cortices and insula, the hippocampus (involved in memory formation and consolidation, and learning), and the anterior and mid-cingulate and orbitofrontal cortex (involved in self and emotion regulation).

In these brain regions, the researchers observed increased white and grey matter volume, an indication that the region may have more power to impact overall brain function. Although we’re beginning to get a better picture of the neurobiological bases of meditation’s many positive psychological and cognitive effects, this research is in early stages. What this emerging research does suggest, however, is that meditation produces measurable changes in brain structure, effectively rebuilding the brain matter in regions important for cognition and behavior.