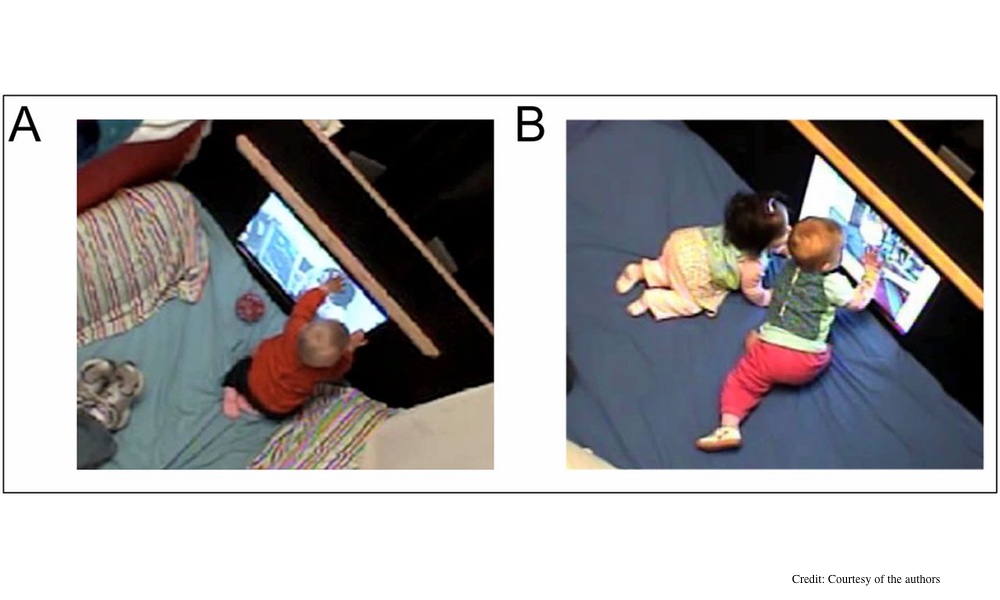 Put Two Babies in Front of a Screen...

Plunking your infant in front of a screen may not always be a bad idea, at least not if they have a fellow baby by their side. Babies learn better in pairs, as a study published in PNAS, Proceedings of the Academy of Sciences, makes clear.

The difference is social interaction and the arousal it brings. The findings are in line with previous research showing that babies learn language better when they are interacting with someone, such as a parent or caregiver. They also suggest that screens themselves may not be the issue when it comes to learning, a lack of interaction is.

“Social partners not only provide information by showing us how to do things, but also provide motivation for learning.”

Simply sitting passively in front of screen is not likely to help language learning, but reacting to a screen with a fellow infant does, the researchers, from the University of Connecticut and University of Washington, say.
ADVERTISEMENT
“Novelty increased learning,” explained researcher Patricia K. Kuhl. “What this study introduces for the first time is that part of the reason we learn better when we learn collaboratively is that a social partner increases arousal, and arousal in turn increases learning. Social partners not only provide information by showing us how to do things, but also provide motivation for learning.”

Thirty-one infants were enrolled in the study. Each was randomly assigned to individual or paired conditions. Babies controlled their video-viewing experience, using touchscreen technology to start the video, something they were quick to learn, the researchers say.

The takeaway is that interacting with your baby is very important to their learning, especially when it comes to language. So is finding situations where your child can interact with others. The time you spend reacting to your baby's sounds and efforts to make sounds will likely advance their learning, even if it doesn't seem that way to you.