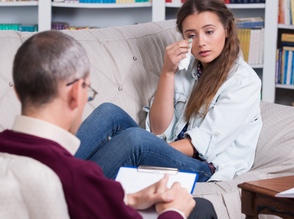 Adolescence is an exciting time, full of physical, mental and emotional changes: Sexual attraction grows; we become aware of our ability to think for ourselves and start to see that we are unique individuals. It can also be a time of intense emotional upheaval.

With all these changes, the emotional lives of teenagers can be a rollercoaster of ups and downs, a tough ride for teens and their parents. A recent National Institute of Mental Health study found that depression is far more common among teenagers than many suspect, with over 10% reporting feelings of depression at any one time.

Depression is Different from Feeling Down
ADVERTISEMENT
Symptoms
Major depressive disorder (MDD) or clinical depression is a common and debilitating mental disorder. A teen or adult who is depressed has a persistent and pervasive low mood, with feelings of hopelessness, pessimism, guilt, worthlessness or helplessness.

Everything feels painful, difficult, or requiring too much effort or energy.

Depressed individuals lose interest in activities that were once pleasurable to them, feel tired and have low energy, have difficultly with concentration, memory and decision-making. They may be irritable or restless, have changes in sleep behavior that range from insomnia to excessive sleeping.

Their eating behaviors may change. People who are depressed may overeat or have a loss of appetite and weight loss. They often have physical complaints including aches, pains and digestive problems that do not respond to treatment.

People with depression can find it difficult to function at home, at work, or in school and in social settings. Everything feels painful, difficult, or requiring too much effort or energy. They may contemplate or attempt suicide.

ADVERTISEMENT
Diagnosis and Treatment
There is no blood test or imaging test to diagnose depression, though they are in the works. Depression is usually diagnosed by a healthcare provider based on information provided by the patient and friends or family members about the individual’s mood, mental status, and daily functioning, along with a formal mental status exam.

People with depression are typically treated with psychotherapy and/or medication. In some persistent cases, electroconvulsive therapy and transcranial magnetic stimulation are used.

Depression in Teens
ADVERTISEMENT
To better understand how common depression is among adolescents and how it might best be prevented, diagnosed, and treated, researchers looked at teens 13 to18 years old.

They surveyed over 10,000 parents and adolescents to explore the rates of depression, the degrees to which symptoms interfered with teens' functioning, the risk of suicide, and the types of treatment adolescents tended to receive.

The study found that major depressive disorder was common in the adolescent population. Eleven percent reported symptoms of depression at any time, while 7.5% reported depression during the preceding year.

The risk of developing depression in adolescence increases with age. Severe depression was almost four times higher in older rather than younger teens.

Family income, race, whether parents were divorced, or geographical differences such as urban vs. rural location seemed to have no effect on these numbers. What did make it more likely a teen would develop depression were the presence of anxiety and behavioral disorders, such as ADHD or conduct disorders.

Many of the teens who were diagnosed with major depression indicated that they were significantly disabled by their condition. It left them less able to participate in their age-appropriate roles and activities at home, school, and in social settings. Thirty percent of depressed teens reported some kind of suicidal thoughts, with 10% reporting an actual suicide attempt.

The majority, 60%, received treatment for their depressive disorder. However, only a third of depressed teens received either disorder-specific treatment or treatment from a mental health provider. This treatment gap was even greater for minority youth.

Teens are often moody, but this isn't a reason not to be concerned if you feel your child may be depressed.

The researchers concluded that depression is common in adolescence and often leads to mental and physical health challenges that persist into adulthood and impair long term social/vocational/economic success and quality of life. Teenage girls are at particularly high risk, they found, and should be high priority targets of early treatment and prevention.

Teens are often moody, but this isn't a reason not to be concerned if you feel your child may be depressed. If your teenager starts sleeping or eating a great deal more or less than usual; if he or she seems listless and uninterested in things that used to give pleasure, try to ask him or her about it. You may want to look into treatment options in your area or check with your family doctor.

Therapy and antidepressant medication can make a big difference in easing depression. Since depression can be recurring, it's particularly helpful if teens learn early that they can take steps to improve their mood and feel better about life.

Suicide is the third leading cause of death among U.S. teenagers, so identifying and treating depressed adolescents is a potentially life-saving priority. We need public health policies that emphasize early identification and prevention of depression, the researchers say. They further note that there are validated screening tools that can be used at schools and in primary care health settings to identify at-risk teens and make appropriate interventions and referrals.

Parents who notice behavior changes in their teens, including worrisome trends in their school and social functioning, may wish to consult their health care providers to determine whether depression may be playing a role in their children’s lives.

The study is published in Journal of the American Academy of Child and Adolescent Psychiatry.