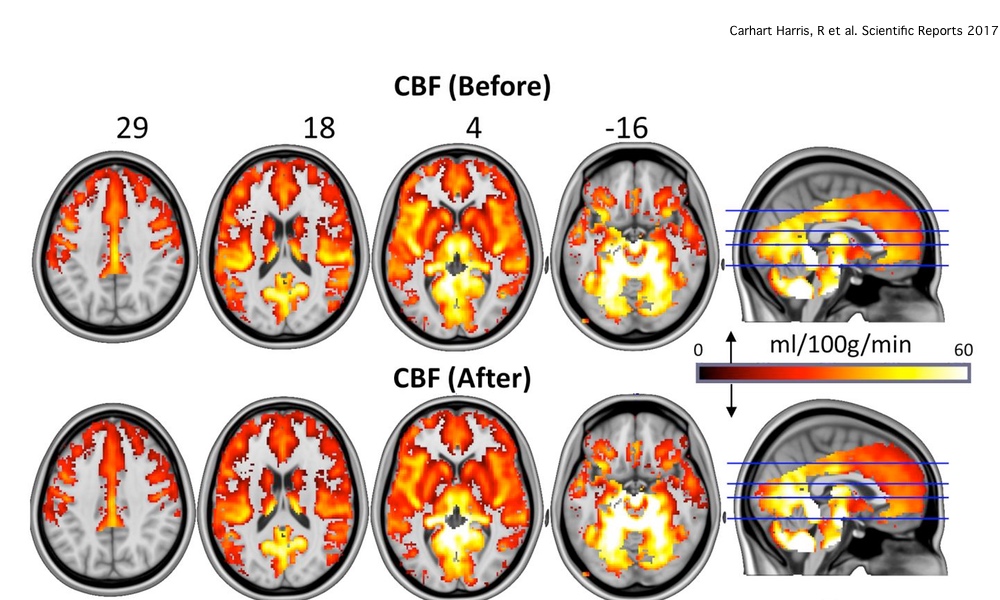 A Reset for Depressed Brains

Psilocybin — the main psychoactive ingredient in magic mushrooms — has exhibited promising therapeutic potential in the last few years, with studies showing that it can ease anxiety and depression, promote a more positive outlook and increase openness.

Little had been known about how psilocybin brings about these changes, but a new study suggests that it works by essentially resetting connections in the brain — breaking them down and then re-forming them.

“Psilocybin may be giving these individuals the temporary ‘kick start’ they need to break out of their depressive states… .”

Perhaps, more importantly, the study also found that psilocybin is highly effective at easing treatment-resistant depression.
ADVERTISEMENT
Twenty people who had been treated for depression but had not improved took part in the study. All were given two doses of psilocybin one week apart, a small dose of 10 milligrams followed by a larger one of 25 milligrams, and all reported at least some depression relief following the second dose.

Of the 19 patients who completed the Imperial College, London study, 12 had their depression score lowered by half or more one week after the second dose. At five weeks, 47 percent still showed a depression score that was at least half lower than their original score.

“Several of our patients described feeling ‘reset’ after the treatment and often used computer analogies. For example, one said he felt like his brain had been ‘defragged’ like a computer hard drive, and another said he felt ‘rebooted’,” Robin Carhart-Harris, Head of Psychedelic Research at Imperial, who led the study, said in a statement. “Psilocybin may be giving these individuals the temporary ‘kick start’ they need to break out of their depressive states... .”

Images taken of the patients' brains seem to support a ‘reset’ analogy. The effects were similar to those seen with electroconvulsive therapy, Carhart-Harris said.

Previous studies demonstrated how networks or connections in the brain are disrupted during the first 12 hours after taking psilocybin, but few if any looked at what happens after 12 hours. In this study, functional MRI scans taken the next day showed these networks had re-formed, with some differences from the way they looked prior to taking psilocybin.

Along with the changes seen in the amygdala, changes in communication among other parts of the brain were also seen in the post-psilocybin brain scans.

The meaning of these results is limited by the study's small size and the fact there was no control group to compare the effect of psilocybin to. Yet, the research does present more evidence that psilocybin can be useful in treating disorders of the brain.

The study appears in Scientific Reports and is freely available.