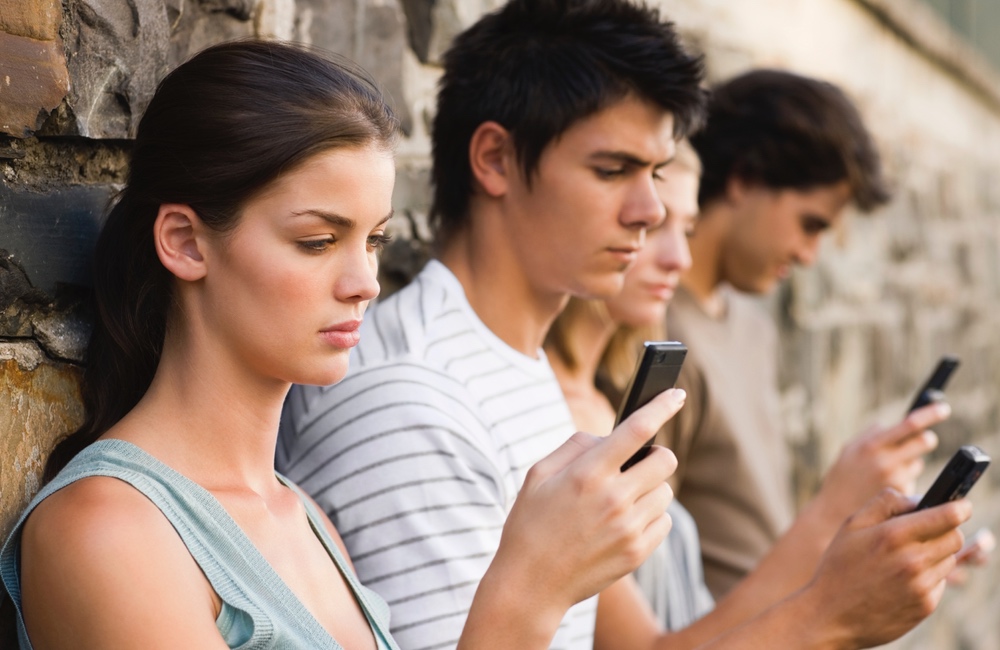 Is Your Cell Phone Making You Sad?

Alice G. Walton
Worried about how much time you spend on your phone or computer? Here's one way to think about it.

If you look around — particularly if you live in a big city — you’ll see many people hunched over their phones like they are absorbed in one of the world's most fascinating objects. They may be playing games, texting with friends, reading restaurant reviews, getting directions or catching up on their emails.

Since phones fill all these different roles, it is not surprising they have different effects on us. And according to a new study, how your cell phone makes you feel depends on what your motivation for using it is in the first place.

People with more obsessive, addictive tendencies toward their phones and Internet use in general were also more likely to be depressed or anxious.

People have different relationships with their cell phones. For some it is primarily a tool they use to find things and entertain themselves. For others it's a way of connecting to friends, an escape, a source of wistful dissatisfaction, a security blanket, an obsession. For example, we know that Facebook can help people connect socially, but it can also promote envy and cause stress.
ADVERTISEMENT
Why Do We Reach for Our Phones?

Three hundred University of Illinois students filled out surveys about their phone and Internet usage. They answered questions about their cell phone use, Internet use, their motivations for getting on their cell phones and computers in general and their mental health. The survey asked questions like: “Do you think that your academic or work performance has been negatively affected by your cellphone use?” and “Do you think that life without the Internet is boring, empty and sad?”

Just having a phone by one’s side acts as a security blanket of sorts.

Researchers wanted to see what sorts of connections there might be between the students’ mental health, their use of cell phones and why they picked up their phones in the first place. They found that, overall, people with more obsessive, addictive tendencies toward their phones and Internet use in general were also more likely to be depressed or anxious.

People who described themselves as tending toward being addicted to the Internet and cell phones “scored much higher on depression and anxiety scales,” according to researcher Alejandro Lleras.

ADVERTISEMENT
But the reasons people gave for using their phones — why they turned to them — seem to make a difference. Those who reported getting on their phones mainly out of boredom did not seem to do so out of mental health problems such as depression and anxiety. But people who said they used phones or the Internet to cope with depression or anxiety or other emotional issues were more likely to also report mental health problems.

In a second part of the study, the team had these college students either hold onto their cell phones or give them up before they were exposed to a stressful situation in the lab. People who kept their phones, even though they weren’t allowed to use them, reacted better to the stress than those who'd given them up, suggesting that just having a phone by one’s side acts as a security blanket of sorts. “Having access to a phone seemed to allow that group to resist or to be less sensitive to the stress manipulation,” said Lleras, a professor of psychology at the University of Illinois.

Hearing about such findings on cell phone or Internet use and mental health issues may make some worry. But there is no need to ration your phone minutes just yet (unless you feel certain you really have a problem). New technology throws most of us for a loop at first, and it can take a while to figure out how to “coexist” with it. And clearly, these technologies are not all bad. If you’re aware of the potential pitfalls and keep an eye on yourself, then there’s no reason to think that using such devices will lead to mental health issues.

If you feel your cell phone use is getting out of control or doing more harm than good, maybe it’s time to take a little breather, and connect with people in the flesh.

We shouldn't be afraid of people connecting online or talking on their phones, Lleras adds. “The interaction with the device is not going to make you depressed if you are just using it when you are bored. This should go toward soothing some of that public anxiety over new technology.”
ADVERTISEMENT

It is important to point out that the study doesn't tell us anything about what causes the problem, just that there is a connection between certain kinds of cell phone and Internet use and depression. The relationship could certainly go both ways.

It could be, for instance, that people who started out with more mental health issues are the ones using their phones to cope with or avoid negative feelings, or to convince themselves that everyone is doing better than they are. So it may be that existing mental health disorders trigger cell phone use rather than the other way round.

If you’re dealing with any kind of mental health issue, cell phone-related or not, talk to a mental health professional. And if you feel your cell phone use is getting out of control or doing more harm than good, maybe it’s time to take a little breather, and connect with people in the flesh.

The study is published in the journal Computers in Human Behavior.