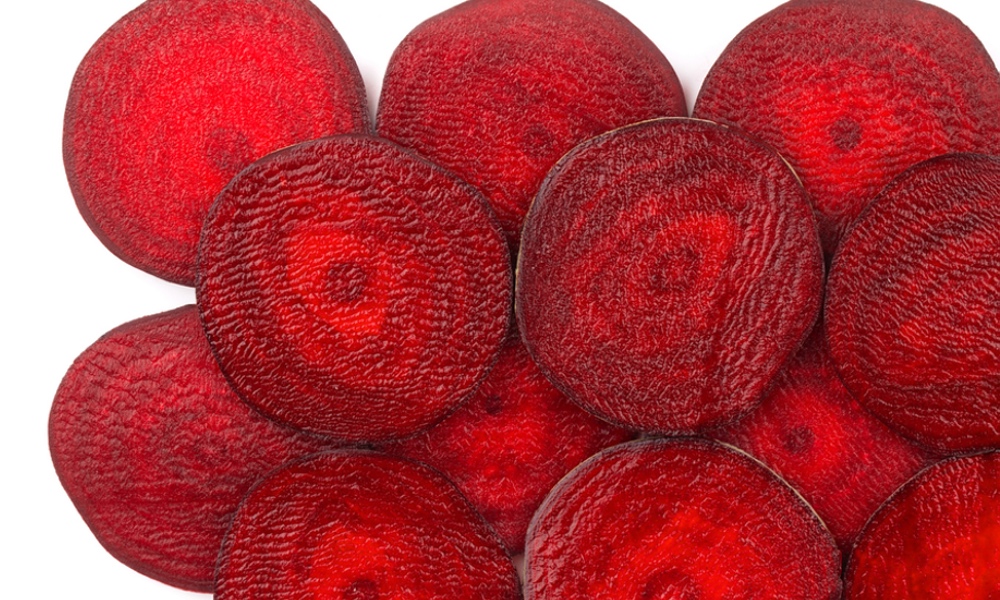 Beth Fontenot, MS, RD, LDN
A compound in beets may help prevent the misfolded proteins associated with the disease.

You may want to add beets to your arsenal in the fight against Alzheimer’s disease. The chemical that gives beets their bright red color seems to prevent chemical reactions that contribute to deterioration in the brain.

The cause of Alzheimer's, a progressive and irreversible brain disease, is not yet fully understood, but it occurs when a protein fragment called beta-amyloid accumulates in the brain and interrupts communication between brain cells. Most of the damage seems to occur when beta-amyloid binds to metals like iron or copper, causing the protein fragments to fold incorrectly and clump together. This causes inflammation and oxidation, a process much like rusting, in nearby brain cells, which eventually die.

Betanin gives beets their red color and is used in commercial dyes. It readily binds to metals, so the researchers wanted to see if it could block the effects of copper on beta-amyloid, thus preventing the misfolding of these peptides and the oxidation of neurons.

When betanin was added to the copper-bound beta-amyloid, oxidation was reduced by as much as 90 percent. Less oxidation could prevent misfolding to the point that it slows the aggregation of beta-amyloid peptides.

Beets' bright color is a tip-off that they are rich in flavonoids which have antioxidant effects. Studies have suggested that beetroot juice may improve the flow of oxygen to an aging brain, possibly aiding in intellectual performance. Researchers at the University of South Florida decided to see if betanin could be used to stop the effects of copper on beta-amyloid and prevent the chemical reactions that lead to the loss of brain cells. In a series of experiments scientists tested DTBC, a compound that is used for tracking the chemistry of oxidation. Then they looked at oxidative reaction of DTBC when exposed to beta-amyloid only, beta-amyloid bound to copper, and copper-bound beta-amyloid in a mixture containing betanin.
ADVERTISEMENT

They found that when betanin was added to the copper-bound beta-amyloid, oxidation decreased as much as 90 percent. Whereas on its own, beta-amyloid caused little or no oxidation of DTBC; and as expected, it caused substantial DTBC oxidation when it was bound with copper. The researchers believe the addition of betanin possibly reduced the misfolding of the protein fragments.

“We can't say that betanin stops the misfolding completely, but we can say that it reduces oxidation,” researcher, Darrell Cole Cerrato, said in a statement. “Less oxidation could prevent misfolding to a certain degree, perhaps even to the point that it slows the aggregation of beta-amyloid peptides, which is believed to be the ultimate cause of Alzheimer's.”

Over five million Americans are believed to have Alzheimer’s disease. It affects one in 10 Americans 65 and older, and one in three by the age of 85.

“This is just a first step,” University of South Florida chemistry professor and researcher, Li-June Ming, Ph.D., explained. The team hopes their findings will encourage other scientists to look for structures similar to betanin that might lead to drugs that could make life a bit easier for those who suffer Alzheimer's.

The study was presented at the 255th National Meeting & Exposition of the American Chemical Society.