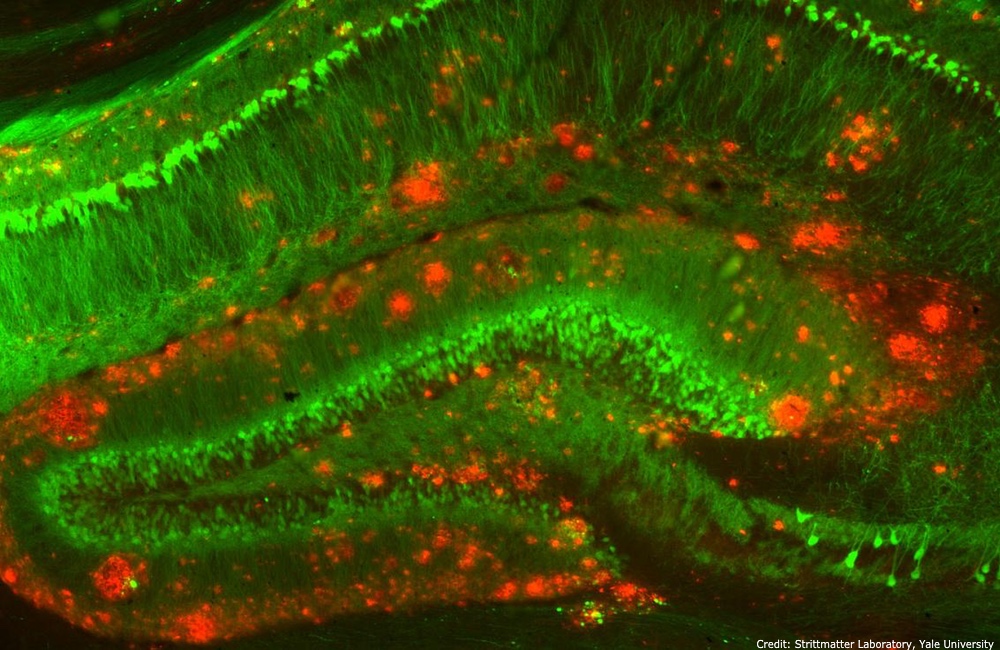 Leslie Carr
The active compound in marijuana — THC — may prevent the brain detritus that causes Alzheimer's.

Before Alzheimer's disease symptoms ever appear, amyloid beta, the protein fragment associated with the disease, has already begun accumulating in the nerve cells (shown red among neurons in green in the mouse model of Alzheimer’s disease above). The amyloid beta begins destroying the connections between the nerve cells (synapses) before it clumps into the plaques that will lead to nerve cell death that characterizes Alzheimer's, a progressive brain disorder with memory loss that seriously impairs a person's ability to carry out daily tasks.

In what could become one of the most surprising treatments for this disease, THC, or tetrahydrocannabinol, the compound behind marijuana's high, appears to improve the brain's ability to dispose of the protein refuse responsible for Alzheimer's by mimicking THC-like compounds that the nerve cells make themselves.

When the nerve cells were exposed to THC, it reduced amyloid beta protein levels and eliminated the inflammation caused by the protein, which allowed nerve cells to survive.

Scientists at the Salk Institute conducted the exploratory studies on neurons grown in the laboratory. Their findings are preliminary; so before heading off in search of marijuana, you should wait until the use of THC-like compounds as a therapy for dementia has been tested in clinical trials.
ADVERTISEMENT
Other studies have found that cannabinoids protect against the symptoms of Alzheimer's, but, according to David Schubert, the senior author of the paper, “we believe our study is the first to demonstrate that cannabinoids affect both inflammation and amyloid beta accumulation in nerve cells.”

Alzheimer's disease is expected to triple during the next 50 years as the population ages. It already affects more than five million Americans and is the most common cause of dementia.

“Inflammation within the brain is a major component of the damage associated with Alzheimer's disease, but it has always been assumed that this response was coming from immune-like cells in the brain, not the nerve cells themselves,” first author, Antonio Curries, said in a statement. “When we were able to identify the molecular basis of the inflammatory response to amyloid beta, it became clear that THC-like compounds that the nerve cells make themselves may be involved in protecting the cells from dying.”

The psychoactive effects of marijuana are caused by THC, a molecule similar in activity to endocannabinoids that can activate receptors in brain cells and promote signaling in the brain.

ADVERTISEMENT
Physical activity results in the production of endocannabinoids, and some studies have shown that exercise may also slow the progression of Alzheimer's disease.

The study is published in Aging and Mechanisms of Disease.