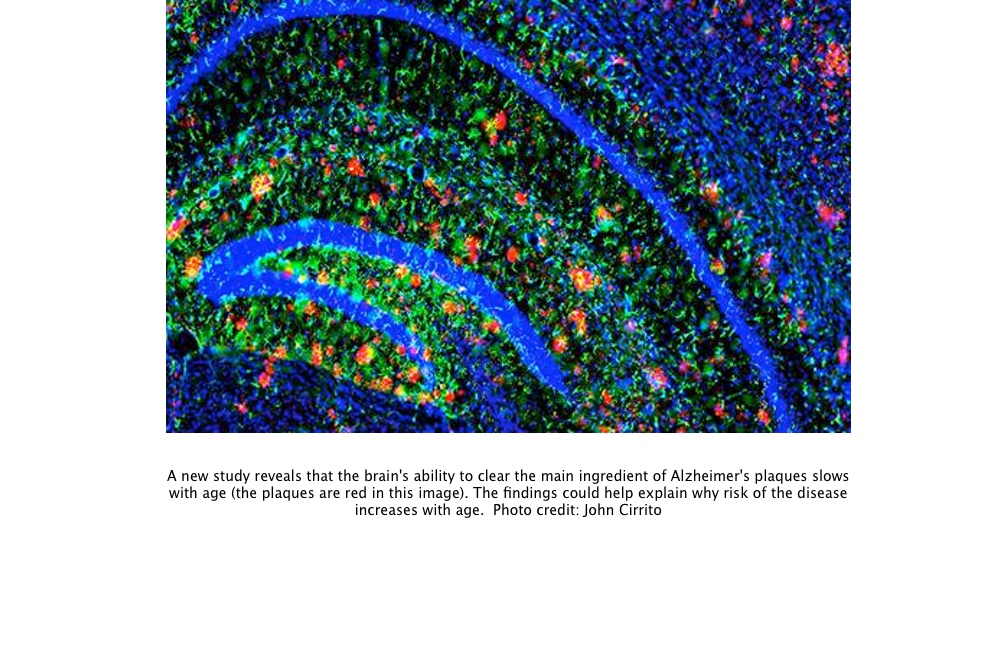 Alice G. Walton
Younger brains are better at clearing away Alzheimer’s proteins than older brains. Is there anything we can do?

Your body isn't the only thing that slows down as you age. Your brain slows down, too, and with it, the brain's housekeeping abilities.

The result is a buildup of the normal protein byproducts of brain activity. These proteins appear to be one of the key reasons why the greatest risk factor for Alzheimer’s disease is advancing age.

Amyloid beta 42 is a main ingredient of Alzheimer’s brain plaques. The protein, a natural byproduct of brain activity, normally is cleared from the brain before it can clump together into plaques. Scientists long have suspected it is a primary driver of the disease.

A new study reveals more about why older brains seem to have a harder time clearing the plaques that build up in the brain.

[P]eople in their 30s typically take about four hours to clear half the amyloid beta 42 from the brain… at over 80 years old, it takes more than 10 hours.

The team studied 100 people between the ages of 60 and 87, half of whom were already suffering from early symptoms of cognitive decline, like memory loss or personality changes. And 62 of the participants had signs of plaques in their brains.

Slower clearance rates of amyloid beta 42 were also more likely in older participants, and in those with existing Alzheimer’s symptoms. In fact, compared to younger adults, elderly people had a significantly slower clearance rate.

ADVERTISEMENT
“We found that people in their 30s typically take about four hours to clear half the amyloid beta 42 from the brain,” said study author Randall J. Bateman in a statement. “In this new study, we show that at over 80 years old, it takes more than 10 hours.”

The team believes the brain clears amyloid beta in one of four ways: The first three involve actually getting rid of it, while the last way involves depositing it into plaques that lead to Alzheimer’s.

“Through additional studies like this, we’re hoping to identify which of the first three channels for amyloid beta disposal are slowing down as the brain ages,” Bateman added. “That may help us in our efforts to develop new treatments.”

So while treatments are being developed, are we all doomed? Not at all. Though aging does increase one’s odds for getting Alzheimer’s disease, there are things we can do to reduce our risk. Regular exercise, eating a healthy diet and not smoking have all been shown to lower the risk.

Treating existing depression can also help, since it has been linked to increased Alzheimer’s risk. And very recent evidence shows that getting adequate sleep may reduce the risk for Alzheimer’s, since the brain clears the destructive proteins much better in sleep than when awake. There are no guarantees, but doing all these things as much as you can may make a difference in brain health over the long term.

ADVERTISEMENT
The study was carried out at Washington University and is published in Annals of Neurology.