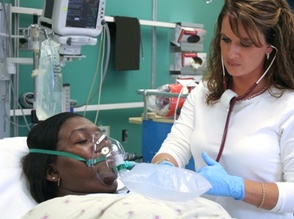 Ruqaiijah Yearby, J.D., M.P.H.
African-American patients find it easier to deal with physicians whose racism is obvious. At least then they know where they stand.

“Of all the forms of inequality, injustice in healthcare is the most shocking and inhumane.” - Dr. Rev. Martin Luther King Jr.

The largest disparity in health status in the United States is between African-Americans and whites. Some argue that biological differences between racial groups are the cause of these racial disparities. However, as the Human Genome Project proves, the notion of biological race is based on three flawed assumptions: 1) that ‘race’ is a valid biological category; 2) that the genes which determine ‘race’ are somehow linked to the genes which affect health; and 3) that the health of any community is mainly the consequence of the genetic constitutions of the individuals within it.

If race plays a role in health disparities, it is because race is a powerful determinant of access to educational, housing, and employment opportunities.

Health disparities are the differences in health seen in groups of people who have systematically experienced greater obstacles to obtaining health care services because of their racial group, socioeconomic status, or other characteristics historically linked to bias or exclusion. They affect both a person's quality and length of life.

There have been many studies regarding racial disparities in access to health care, below are a few that illustrate the barriers African-Americans face in accessing quality health care.

ADVERTISEMENT
Undertreatment of Disease
As early as 1996, researchers documented that physicians treated African-American Medicare patients less aggressively than white Medicare patients. Investigators found that white patients were more likely to be hospitalized for ischemic heart disease, have a mammography, and undergo coronary artery bypass surgery, coronary angioplasty, and hip-fracture repair. This was true even when the incomes of white and African-American patients were the same.

African-Americans were less likely than whites to receive curative surgery for early-stage lung cancer, and were therefore more likely to die. The study showed that if African-American patients underwent surgery at a rate equal to whites, their survival rate would approach that of white patients.

Despite generally living closer to high-quality urban hospitals than many whites, African-Americans are more likely to undergo surgery at low-quality hospitals.

This is because decisions about where to go for major surgery are made by referring physicians, not by patients and their families, and the research clearly shows that the provision of primary care is racially separate and unequal, when it comes to determining where patients have surgery.

The Institute of Medicine's Findings
All of these studies suggest that the unequal health care treatment received by African-Americans occurs as a result of their race. This idea is underscored in the 2003 Institute of Medicine Study, “Unequal Treatment: Confronting Racial and Ethnic Disparities in Healthcare.”

The IOM study found evidence that minority patients received poorer quality of care when it came to cancer treatment, treatment of cardiovascular disease, and rates of referral for clinical tests, diabetes management, pain management, and other areas of care.

Explicit and Implicit Interpersonal Racial Bias
Interpersonal racial bias can be explicit, when someone is conscious of their prejudicial beliefs that members of one racial group (such as whites) are superior.

Biases can also be implicit, when someone consciously rejects stereotypes and supports anti-discrimination efforts, but at the same time unconsciously believes that members of one racial group (such as African-Americans) are inferior.

Social psychology research indicates that most interpersonal racial bias between African-Americans and whites in the United States is caused by implicit racial bias, this subtler form of racism. Most of us believe that racism is wrong, but our deeper attitudes still don't fully match up with this belief and racial biases have a way of coloring how we view people and situations.

In 1999, a study of primary care physicians’ perceptions of patients found that a patient’s race and sex determined whether or not a physician recommended medically appropriate cardiac catheterization. Another study found that African-Americans were less likely to be referred for cardiac catheterizations than whites, and African-American women were significantly less likely to be referred for treatment compared to white males.

A 2002 survey of physicians’ perceptions of patients demonstrated that physicians, as a result of their racial biases, rated African-American patients as less intelligent, less educated, and more likely to fail to comply with physicians’ medical advice.

That same year, another study found that African-Americans were also less likely than whites to be evaluated for renal transplantation and placed on a waiting list for transplantation.

In 2000, a white physician serving African-American patients in New York, wrote about his battle to overcome his own and his colleagues’ racial biases. These biases often prevented African-Americans from accessing quality health care.

Most recently, a 2008 study reported that physicians implicitly favor white patients over African-American patients. In this study, physicians’ racial attitudes and stereotypes were assessed and then physicians were presented with descriptions of hypothetical cardiology patients differing in race.

Although physicians reported not being explicitly racially biased, most physicians regardless of race or ethnicity held implicit negative attitudes about African-Americans. This is significant because research has shown that the stronger the implicit bias, the less likely the physician was to recommend the appropriate medical treatment for African-American patients for heart attacks.

Patients view implicit racists, those who believe they are not prejudiced, but whose attitudes and assumptions suggest otherwise, as deceitful and therefore more problematic. At least overt racists are seen as clear and honest about their prejudicial beliefs.

Patients tend to view these racists-in-denial as deceitful and therefore more problematic. Physicians who are clearly racist are seen as clear and honest about their beliefs. This perception may explain why African-Americans are less compliant with treatment recommendations made by physicians, who they feel are implicitly racist. Because these implicit racist physicians seem less trustworthy; their medical advice is suspect.
The ACA and Federal Support for Change
In the past, the United States government did not provide funding or support to address health disparities, but this changed with the passage of the Patient Protection and Affordable Health Care Act (“ACA” or “the Act” or “Obamacare”).

The Affordable Care Act has the potential to address provider racial bias. The central focus of the ACA is to regulate the health insurance industry and increase access to health insurance for the uninsured, but administrating it includes provisions for assessing health disparities in people's access to health care and the quality of health care they receive — including preventive care, health education programs, language services, community outreach, and cultural competency training.

Simply increasing the diversity of physicians is, however, not enough to equalize access to health care and ensure that racial minorities reach their full health potential.

The ACA does not specifically address providers’ implicit racial biases. Nevertheless, the requirements of nondiscrimination do apply to the ACA and it provides for funding for research on health disparities in access as well as support for programs to put an end to health disparities.

Thus, simply increasing the diversity of physicians is, however, not enough to equalize access to health care and ensure that racial minorities reach their full health potential.

One solution to address health disparities is to improve health equity by increasing the numbers of minority physicians serving patients. Research shows that African-American patients, when compared to white patients, are less likely to receive encouragement to participate in medical decision-making and less likely to receive sufficient information from their physicians about their medical condition when their physician is a different race.That is why increasing the diversity of physicians will improve medical interactions between physicians and patients. However, as discussed above, physicians of all races and ethnicities have been shown to be racially biased against African-American patients, so health equity must also include training to overcome physicians’ implicit racial bias.

Even as the number and diversity of health care providers within African-American communities increases, it is important that these providers have the same board certification, hospital staffing relationships, and resources as those serving white patients. Then, and only then, will African-Americans have equal access to health care that ensures they reach their full health potential.

“ Our urgent responsibility is to assure adequate health care to all Americans, I think that none would deny that consideration of race or color has no place with regard to the ailing body or the healing hand.” - Anthony J. Celebrezze, former Secretary of Health and Human Welfare,

An estimated 4.2 million African-Americans have died unnecessarily since the 1960s as a result of racial disparities in health status and access to health care. Racial disparities persist in the United States because we continue to ignore one of the root causes of the disparities: racial bias within the health care delivery system.

Decades of medical research studies show that African-Americans continue to receive separate and unequal treatment compared to whites in hospitals, nursing homes and physician offices in part because of providers’ racial bias. In order to begin to address racial bias in health care, health care providers need to be educated about their racial bias and the role their bias plays in treatment decisions, which affects their patients’ health status.

Until this re-education of health care providers occurs, more African-Americans will unnecessarily die and racial disparities in access to health care and health status will persist unfettered.