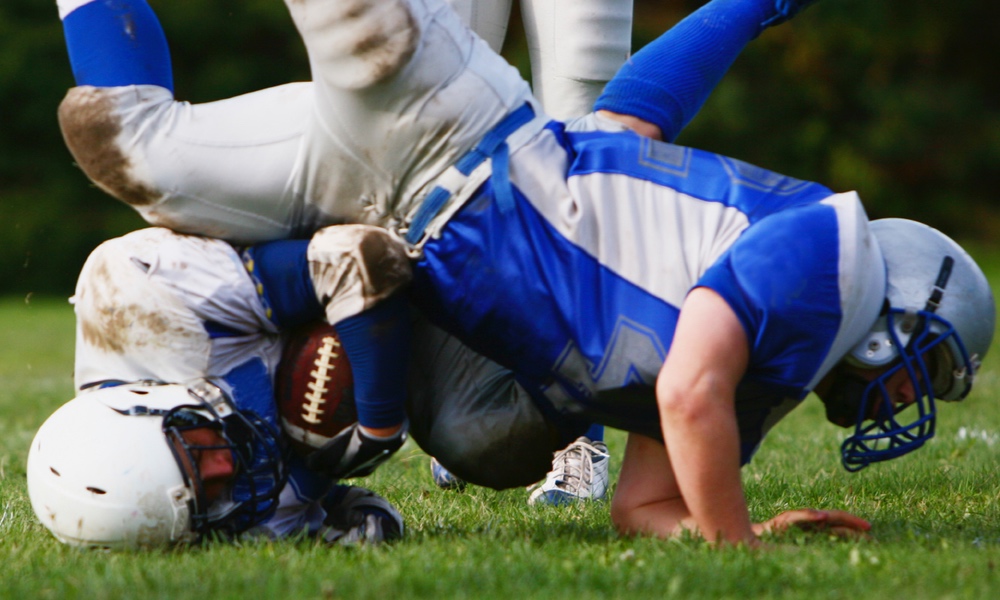 Little Hits Damage the Brain, Too

Though the NFL may not like to admit it, there’s not much doubt that football can cause serious and irreversible damage to the brain. And it’s not just concussion-level injuries that can lead to brain damage, but sub-concussive hits that can also pose serious risk over time, as research in recent years has shown.

The damage shows up pretty quickly. The repeated, modest hits that are common when playing football can cause changes in the brain that can be seen within just one season, a study from Carnegie Mellon University and the University of Rochester Medical Center finds.

“It's not just the concussions. It's everyday hits, too.”

“Public perception is that the big hits are the only ones that matter. It's what people talk about and what we often see being replayed on TV,” said study author, Brad Mahon, in a statement. “The big hits are definitely bad, but with the focus on the big hits, the public is missing what's likely causing the long-term damage in players' brains. It's not just the concussions. It's everyday hits, too.”
ADVERTISEMENT
An Accumulation of Little Hits

The team followed 38 college football players through a season, scanning their brains with MRI at its start and end. They also outfitted the players’ helmets with accelerometers, to measure the force and direction of each hit, recording hits that were 10 gs or greater (“gs” refers to a unit of acceleration equal to the acceleration of gravity at the earth's surface). To give perspective, the researchers say a car crash can be 100 gs.

Rotational hits, which cause the head to twist, were correlated with white matter changes: the more hits a player had, the more changes in the white matter were observed.

Of particular interest was an interior brain structure, called the midbrain, because it’s more rigid than other areas, and so, the researchers reasoned, might be subject to more damage. They looked for evidence of changes to the white matter, the cells’ connective network that allows them to communicate with one another.

During the season, the players together sustained almost 20,000 hits, though only two led to an actual concussion diagnosis. Rotational hits, which cause the head to twist, were correlated with white matter changes: the more hits a player had, the more changes in the white matter were observed. Linear hits, which come straight on, as in head-to-head hits, also showed a correlation, though it wasn’t as pronounced as rotational hits.

ADVERTISEMENT
The results suggest that even small hits within a single season can lead to measureable changes in the brain. “What we cataloged in our study are things that can't be observed simply by looking at or behaviorally testing a player, on or off the field,” said study author and graduate student, Adnan Hirad. “These are ‘clinically silent’ brain injuries.”
The Connection Between Tau Protein and Brain Trauma
A follow-up experiment used players from other contact sports, some of whom had sustained a concussion. The white matter in their midbrains was measured as in the first experiment, as were blood levels of the tau protein. Tau is one of the two major proteins in Alzheimer’s disease, and builds up when the brain is damaged by hits. It is considered a biomarker for brain trauma, dementia and chronic traumatic encephalopathy (CTE), which is what some football players go on to develop.

Tau is one of the two major proteins in Alzheimer’s disease, and builds up when the brain is damaged by hits.

Players with concussion events also had white matter changes in their midbrains and this was linked to tau protein in their blood. The results confirm the team’s initial findings, and suggest that damage in the midbrain may be a good marker for trauma.
ADVERTISEMENT
The results also make clear that even “regular” hits that don’t lead to a concussion can cause changes in the brain, and these could result in more serious damage over time. It’s critical that players of any age — young players, too — come out of the game when they sustain hits to the head, and not just big ones.

“We also need to re-evaluate how we make return-to-play decisions,” said Hirad. “Right now, those decisions are made based on whether or not a player is exhibiting symptoms of a concussion like dizziness or loss of consciousness. Even without a concussion, the hits players are taking in practice and games appear to cause brain damage over time.”

The study is published in the journal Science Advances.