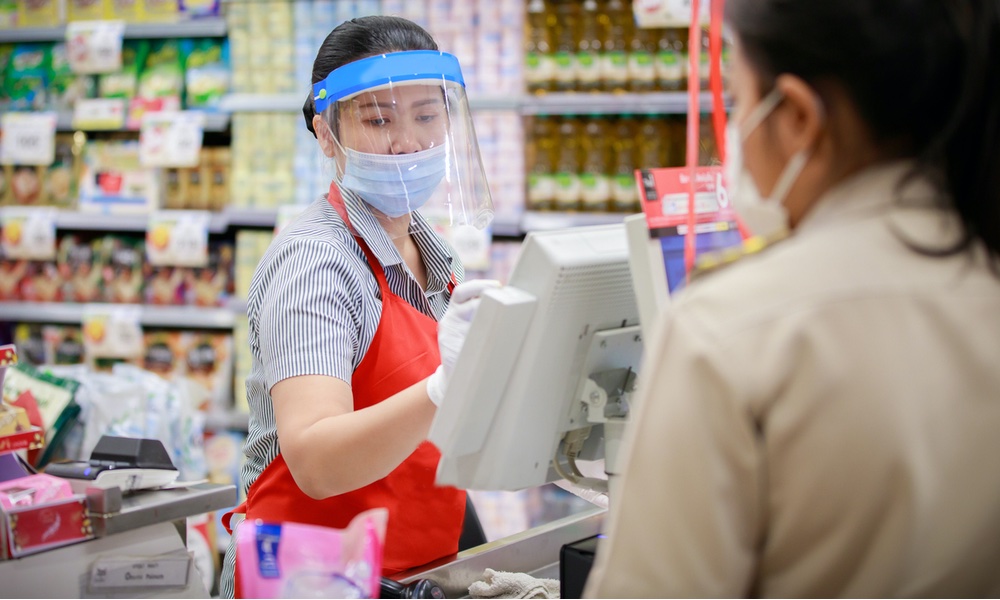 Laurie Wiegler
Grocery store workers are among the unsung heroes of the pandemic. They face high rates of infection and depression and are also often carriers of COVID-19.

After the World Health Organization deemed the novel coronavirus, SARS-CoV-2 (COVID-19), a pandemic in March, Americans flooded their local grocery stores. Shopping carts spilled over with gallons and gallons of water and milk, V8 and baby formula.

In the past few months, a lot has been written about the physical and mental health of our front-line heroes — doctors, nurses and hospital technicians. Yet, from Uber drivers to the guy stocking your local store, there are clearly unsung heroes in this pandemic.

Supervisors were six times more likely to have contracted the virus. Workers in supervisory positions had more frequent interpersonal contacts with both customers and colleagues.

A Harvard study examined the COVID-19 exposure among grocery store workers.
ADVERTISEMENT
Over 100 employees at one grocery store in Boston were studied as part of a mandated testing policy there. Workers were asked to fill out questionnaires about their commutes, contacts and medical history, as well as information about their degree of PPE use and social distancing practices. Specimens were collected using a nasopharyngeal swab inside a designated COVID-19 testing tent.

Results showed a large number of employees who work on the front lines — in customer-facing roles (such as cashier) — tested positive for COVID-19. What’s more, of those testing positive, three out of four showed or experienced no symptoms, suggesting these front line workers could be an important reservoir of infection.

Twenty-one of the employees tested positive for the virus during the three-day study period, a 20 percent infection rate. This was substantially higher than the prevalence of the infection in the local community at the time: 0.9-1.3 percent.

“...[P]eople with customer-facing positions have a significantly higher risk of contracting/transmitting SARS-CoV-2, as high as five times in our study,” researcher Fan-Yun Lan of Harvard and Cheng Kung University told TheDoctor. “…[T]here's always a concern when one has close contact with someone else, such as in the instance of interacting with a sales clerk/ cashier in a store.”

Supervisors were six times more likely to have contracted the virus. Workers in supervisory positions had more frequent interpersonal contacts with both customers and colleagues than one might think. “They do a lot of customer service and communication, causing a higher risk of being exposed to the pathogen,” Lan explained.

ADVERTISEMENT
The Harvard T.H. Chan School of Public Health team also looked into how COVID-19 has affected the mental health of grocery store employees, asking about feelings of anxiety and depression. They found those workers who were able to commute on foot, by bike or in their own vehicle were 90 percent less likely to report depressive symptoms than those who relied on public transportation. Twenty-four percent of the employees tested positive for anxiety and eight percent for depression. Those able to practice social distancing regularly at the store also had a much lower risk of anxiety or depression.

The findings have repercussions for shoppers, too.

“Our significant mental health finding calls for action in providing comprehensive employee assistance services to help essential workers cope with the psychological distress during the COVID-19 pandemic,” the researchers write.

This was a small observational study of workers in one store in one city at one point in time and relied on subjective reports, so, as the researchers emphasize, it can't establish cause. Nevertheless, it is the first study to demonstrate the significant asymptomatic infection rate, exposure risks and the psychological stress grocery workers are experiencing during the pandemic.

The findings have repercussions for shoppers, too. As the authors point out, workers who become infected may “become a significant transmission source for the community they serve.”

The article appears in Occupational and Environmental Medicine.
ADVERTISEMENT

RELATED STORIES
Fitness Monitors Can Track COVID, Too
A COVID-19 Comprehension Test
Getting Back To Business In A Pandemic
LATEST NEWS