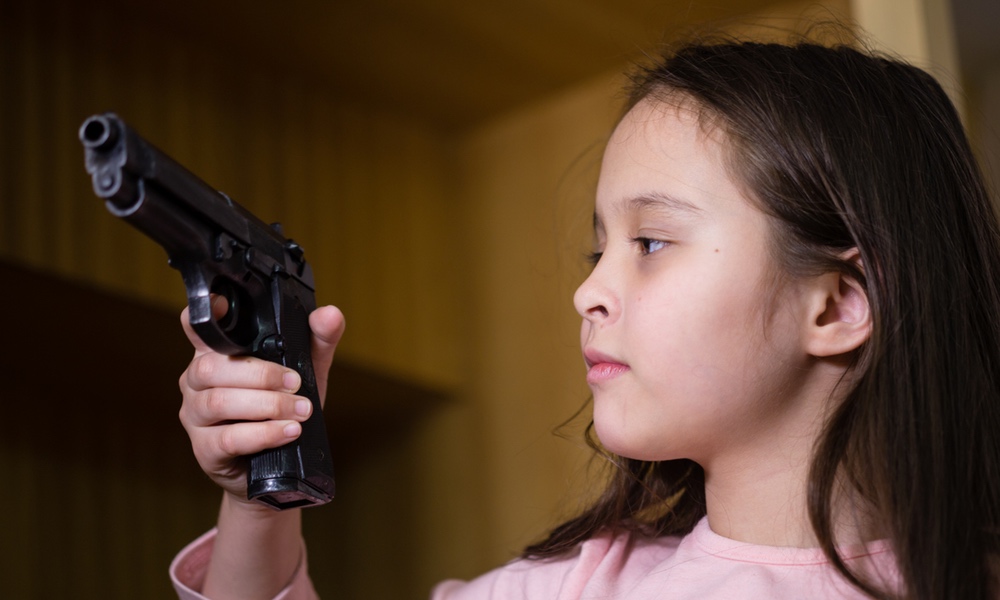 Neil Wagner
What happens when kids who have seen a film clip featuring guns find one in a drawer?

Your child is at a friend's house and finds a gun in a drawer. What would he or she do? Kids are a lot more likely to pull the trigger if they have been watching movies with guns in it, a study finds.

The study used a real .38-caliber gun, disabled and containing a sensor that counted trigger pulls. A hidden camera filmed the children's activities.

One boy pulled the trigger 35 times, pointed the real gun out the laboratory window at people in the street, threatened to hit his friend with the gun, and attempted to steal toys and games from the play room.

Fifty-two pairs of children, ages 8 to 12, watched 20-minute clips of either “The Rocketeer” or “National Treasure.” Half of the clips contained guns, half did not.
ADVERTISEMENT
Finding A Real Gun
Afterwards, each pair was taken to a room with a cabinet full of toys and games and told they could play with any of them. The real, disabled gun was also inside the cabinet.

Forty-three of the 52 pairs of children found the gun. Less than one-third (14) turned the gun over to the research assistant or at least told them about it. In 22 pairs, one or both children handled the gun.

Some of the accounts were alarming: “In pair 1, one boy pulled the trigger 35 times, pointed the real gun out the laboratory window at people in the street, threatened to hit his friend with the gun, and attempted to steal toys and games from the play room. In pair 52, one child held the gun for 18 minutes of the 20-minute play period and pulled the trigger 26 times. He also pulled the trigger at the temple of his partner’s head.”

Other researchers have found that children in the United States are 10 times more likely to die from unintentional gun shootings than children from other developed countries. Seven children and adolescents die from gun violence every day.
ADVERTISEMENT

Brad J. Bushman, Professor of Communication & Psychology at Ohio State University and a coauthor of the study, described the differences in the results of the two groups in an email to TheDoctor:

What Parents and Pediatricians Can Do

An editorial accompanying the study notes that media violence is not likely to go away, but gun owners could help just by storing their guns safely. According to the study authors, nearly 60 percent of U.S. households with guns do not secure them, despite the fact that it's been known for a long time that simply keeping a gun in a locked cabinet can cut the odds of gun deaths, injuries and suicides among teens and children by nearly 75 percent.

An article on the study appears in JAMA Pediatrics.