According to a recent Institute of Medicine study, 100 million people in the U.S. suffer from chronic pain: that’s about one out of every three people. But how do researchers study this subjective condition in an objective way?

One of the big problems in medicine is the need to rely on participants’ self-reports of their experiences. For example, in studying pain, participants may be asked to rank their level of pain on a scale — and as you might guess, the perception of pain can vary widely between individuals, depending on a person’s personal history, heartiness, age, and other factors. What’s more, studies have found that there is considerable cultural bias in the diagnosis and treatment of pain, with some patients perceived as fabricating their pain.

But now, researchers say they’ve come up with an objective way of measuring people’s pain levels: by looking into the brain itself to rate pain physiologically.

The perception of pain can vary widely between individuals, depending on a person’s personal history, heartiness, age, and other factors.

ADVERTISEMENT
“We rely on patient self-reporting for pain, and that remains the gold standard,” said study author Sean Mackey, MD, PhD. “That’s what I, as a physician, rely on when I take care of a patient with chronic pain. But there are a large number of patients, particularly among the very young and the very old, who can’t communicate their pain levels. Wouldn’t it be great if we had a technique that could measure pain physiologically?” After a conference in 2009 on the neuroimaging of pain, Mackey and colleagues were compelled to try to design a “painometer” to measure pain objectively. And this is just what they did.

To begin, the team of researchers brought in eight participants had applied a heat probe to their arms, while their brains were being scanned. A computer was able to develop a pain algorithm, based on what the brain’s pain signals looked like when participants were, and were not, experiencing the painful stimulus.

Then, from this algorithm, the computer was “asked” to determine whether pain was being experienced in a new set of subjects with or without the painful stimulus. The computer was right 81% of the time – an impressive number for the painometer version 1.0. The image below shows brain regions that seem to reflect the pain a person experiences. (Image courtesy of Sean Mackey, MD, PhD.) 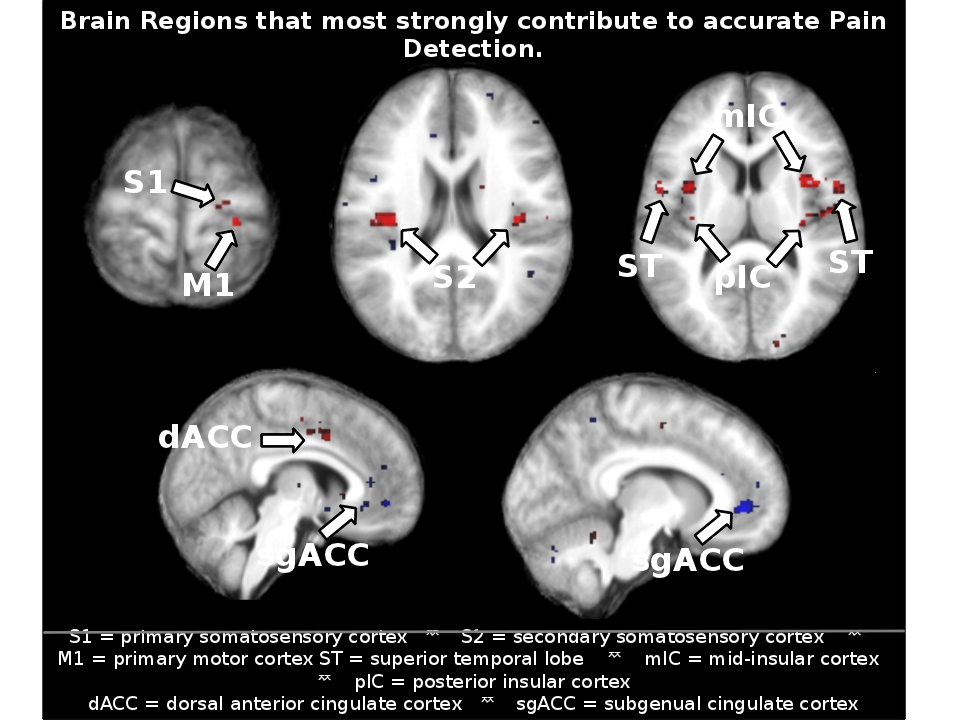 It is, however, important to remember that this is just a first attempt and there will be kinks to work out. The accuracy rate (81%) would likely need to be higher for it to be useful in a clinical setting, and particularly in the legal system. Mackey says that “a key thing to remember is that this approach objectively measured thermal pain in a controlled lab setting. We should take care not to extrapolate these findings to say we can measure and detect pain in all circumstances.” More research will certainly help hone the skills of the painometer, which will have numerous applications, and no doubt change the lives of many.

Dr. Mackey is an Associate Professor in the Departments of Anesthesiology, Division of Pain Management and Neurosciences, at Stanford University. The study will be published in an upcoming issue of PLoS ONE.