All Joy And No Fun: The Paradox of Modern Parenthood 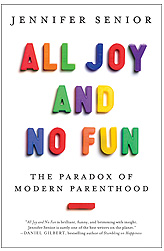 A Parenthood — Not Parenting — Book
Children reshape their parents' lives, affecting marriages, jobs, habits and hobbies. They change the way parents see themselves and give their lives purpose. As New York Magazine contributor, Jennifer Senior points out, the arrival of a child means a loss of autonomy that makes parents say they crave time alone, and prefer answering emails over spending time playing action figures with their 4-year-old. But even as they say this, what parents recall about the experience of being a parent is the deep and satisfying joy that they find in their children. It is, as Senior's subtitle says, a paradox.

All Joy And No Fun offers in-the-trenches portraits of home life illuminated by social science research on the modern pitfalls of parenting: the battlefield that the division of labor in households can be, the crushing burden of trying to create a “happy well-adjusted child” and protecting our children while trying to avoid becoming helicopter parents.

Most parents will find themselves nodding in recognitiion to the scent in the following excerpt which perfectly captures why parents may often feel they no longer have time to string two thoughts together.

Eli is standing on a chair in the kitchen, picking at blackberries.

ADVERTISEMENT
Angie unpeels the oven mitt from her hand. “What is Mommy doing?”

Eli starts to whimper. Angie stops what she’s doing. She looks annoyed, amused, and above all, baffled. There must be protocols for how to handle this kind of farcical exchange in parenting books, but she doesn’t have time for books right now. She’s got lunch to make, dishes to wash, and nursing scrubs to change into.

“Why can’t you change yourself?” she asks. “I want to hear this reasoning of yours.”

Angie stares at her son. I can see her making the rapid calculation all parents make at this point in a cage match with a child, trying to determine whether it pays to relent. Eli is indeed capable of changing his own clothes, and unlike most three-year-olds, he usually succeeds on his first try, with his shirt facing forward and one limb in each pant leg. She could, in theory, hold her ground.

“Maybe you can go upstairs and get me new clothes for you to change into,” she says, after mulling it over. “Maybe you can find me some green underwear. In your underwear bin?”

From an adult’s perspective, this deal has all the face-saving elements of a good compromise. It’s win-win. But Eli, being three, is not taking yes for an answer. Stalling, he wanders over to Angie’s knapsack. “I think Zay wants this,” he says, fishing out a granola bar. Zay, short for Xavier, is his younger brother. “No, he doesn’t.” Angie is calm, but firm. She’s picked a lane, and she’s staying in it. “I need you to do what I ask you to. You’re not listening right now.”

Eli keeps sifting through the bag. Angie walks over and points him toward the stairs. “I need help!” protests Eli.

“No, you don’t,” she answers. “I put all your clothes where they’re supposed to be. Go upstairs and get them.” A suspenseful couple of seconds tick by. Brinksmanship with a three-year-old. She looks conspiratorially at Zay. “Your brother’s being silly, isn’t he? What are we going to do with him?”

Eli huffs but capitulates, slowly making the climb to his room.

A minute or so later, he appears at the top of the staircase, naked as a cupid, and tosses down a pair of clean green underwear. “You did find your green underwear,” Angie exclaims. “Good job!”

She beams and pounces on it, as if it were a bridal bouquet.

Before becoming a parent, Angie, it seems safe to say, would never have imagined that she’d be delighted to witness a preschooler throwing underwear down the stairs. She probably wouldn’t have imagined the elaborate negotiation that preceded this gesture either, or that this kind of negotiation—at once ridiculous and agitating—would become a regular part of her mornings and afternoons. Before this, Angie worked as a psychiatric nurse in the evenings and biked and painted in her off-hours; on weekends, she went hiking with her husband at Minnehaha Falls. Her life was just her life.

But the truth is, there’s little even the most organized people can do to prepare themselves for having children. They can buy all the books, observe friends and relations, review their own memories of childhood. But the distance between those proxy experiences and the real thing, ultimately, can be measured in light-years. Prospective parents have no clue what their children will be like; no clue what it will mean to have their hearts permanently annexed; no clue what it will feel like to second-guess so many seemingly simple decisions, or to be multitasking even while they’re brushing their teeth, or to have a ticker tape of concerns forever whipping through their heads. Becoming a parent is one of the most sudden and dramatic changes in adult life.

In 1968, a sociologist named Alice Rossi published a paper that explored the abruptness of this transformation at great length. She called it, simply, “Transition to Parenthood.” She noted that when it comes to having a child, there is no equivalent of courtship, which one does before marriage, or job training, which one does before, say, becoming a nurse. The baby simply appears, “fragile and mysterious” and “totally dependent.”

At the time, it was a radical observation. In Rossi’s day, scholars were mainly concerned with the effect of parents on their children. What Rossi thought to do was swing the telescope around and ask this question from the reverse perspective: What was the effect of parenthood on adults? How did having children affect their mothers’ and fathers’ lives? Forty-five years later, it’s a question we’re still trying to answer.