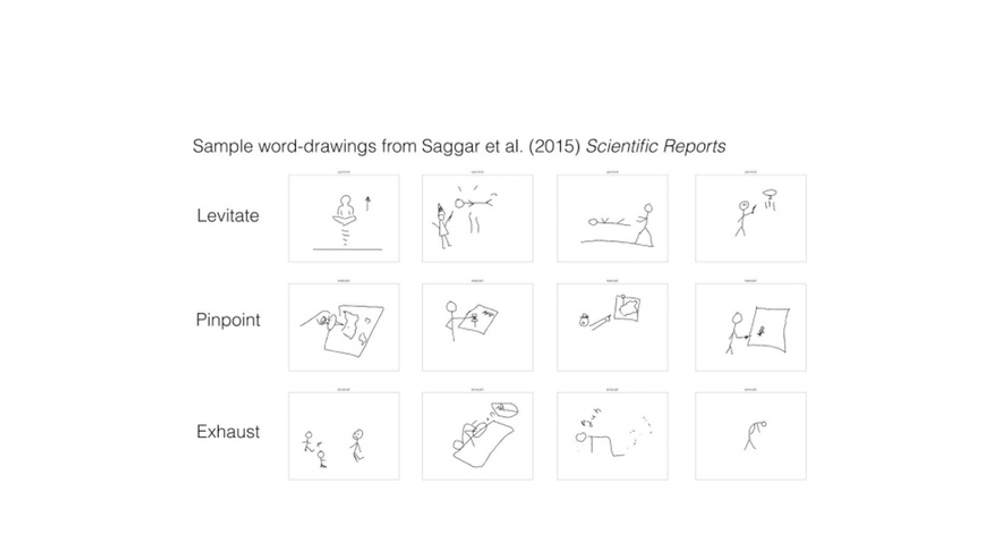 The Executive in Your Head Is No Friend to Creativity

Neil Wagner
When people had to be a little creative in an fMRI scanner, two surprising things showed up.

The harder you try to be creative, the less creative you'll probably be. That's one of the new findings researchers studying creativity have discovered. One surprising insight is that the cerebellum, an area of the brain long thought to be involved mainly in mundane tasks, such as coordinating movement, is involved in the creative process.

The research all started with a student's innocent question.

A little over three years ago, a student from Stanford's Hasso-Plattner Institute of Design asked Allan Reiss if he could objectively measure creativity.

Reiss heads a research lab at Stanford University that focuses on brain structure and function in neurological diseases of childhood, along with less clinically important topics like humor and territoriality.

ADVERTISEMENT
Measuring creativity is a tall order, and Reiss was intrigued. “We didn’t know that much about how to do that,” he said in a statement.

“Creativity is an incredibly valued human attribute in every single human endeavor, be it work or play. In art, science and business, creativity is the engine that drives progress. As a practicing psychiatrist, I even see its importance to interpersonal relationships. People who can think creatively and flexibly frequently have the best outcomes.”

Reiss decided to design a study that would give the team baseline information on creativity’s underlying neurophysiological processes. At least those processes we could measure.

The research team started with functional MRI (fMRI) scans of the brain. These scans can show how active a portion of the brain is at a particular moment.

But a tight, cramped MRI chamber is hardly the ideal place to study creativity. It's hard to think outside of the box when you're trapped inside of one. So rather than asking people to be creative, Manish Saggar, the study's lead author and an instructor in the Department of Psychiatry and the Hasso-Plattner Institute of Design, borrowed from the game Pictionary. He asked people to draw words, ultimately deciding on action words (verbs) such as exhaust, vote and salute.

The harder you try to come up with a creative idea, the worse your results.

During fMRI scans, 30 people drew various words or zigzag lines, an uncreative control task. Then they were given 30 seconds to draw each word, a period short enough to require some creative and inspired thinking. Drawings were rated for creativity by two other researchers, mainly focusing on how many elements were in the drawing, how elaborate it was and how original.

Naturally, there's disagreement about what is and isn't creative. Even the Torrance Test of Creative Thinking, the most commonly used creativity test, has its detractors. But the Stanford researchers' approach did yield some interesting findings.

For words that people thought were difficult to draw, their prefrontal cortex tended to be highly active. That's an area of the brain associated with executive functions such as attention and evaluation. It's as if when confronted with a difficult task, people were trying to force themselves to be creative. But the more creative drawings were done when there was low activity in the prefrontal cortex. The conclusion: the harder you try to come up with a creative idea, the worse your results.

Most of us have probably had this experience — trying to push ourselves to come up with a creative solution and hitting a wall instead. Now we know why forcing yourself to be creative isn't likely to work; a walk in the park might be a better idea.

ADVERTISEMENT
The other unexpected finding was that higher creativity scores were associated with higher activity in the cerebellum. According to the researchers, the cerebellum's reputation for rote learning may have come about because it's often been studied in monkeys, where it is especially important in practicing and learning new movements.

But more recent studies have revealed that the human cerebellum appears to have a different function, with connections not only to the motor cortex, the brain’s higher movement-control center, but also to the other parts of the cortex.

“It’s likely that the cerebellum is the coordination center for the rest of brain, allowing other regions to be more efficient,” said Reiss, a professor and director of the Center for Interdisciplinary Brain Sciences Research at the Stanford University School of Medicine, making it useful in creative endeavors.

One cautionary note: some scientists believe that assigning functions to individual regions of the brain is a somewhat dated and simplistic approach, since the brain's abilities seem to reside more in the connections between regions than in the regions themselves.

The study appears in Scientific Reports.

Drawings courtesy of the Reiss lab