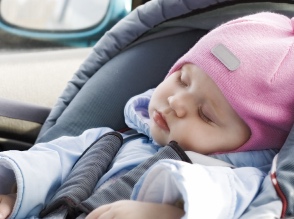 Neil Wagner
Suffocation and falls are risks when kids fall asleep in car seats and carriers, Tips for parents.

For many babies, the car is like a cradle: They fall asleep almost as soon as you are on the road. This may be one reason why so many parents use car seats like beds — carrying their sleeping babies into restaurants in them, putting the car seat + baby on the kitchen counter while dinner is in the works.

Not so fast. Car seats can save lives while driving, but they are dangerous when it comes to sleeping.

The time between when the infant was last seen alive to when they were discovered was as little as four minutes.

Slings and bouncers can be similarly dangerous when babies are left unattended, according to a new Journal of Pediatrics study. It especially warns parents who use these devices as a portable crib.
ADVERTISEMENT
Beds Are for Sleeping; Car Seats for Driving

Infants should be put to sleep on their back in a crib or bassinet with a firm mattress as a way of guarding against the risk of sudden infant death syndrome, or SIDS.

Because their bodies are undeveloped, infants under one year of age are at heightened risk of suffocation. Their nose is much softer than an adult's and when pressed against an object such as a stuffed toy or even a mattress, it flattens easily, which can block the opening, prevent breathing and may lead to suffocation. Infants also lack the strength to move their head or even to hold it up, so once in a dangerous position, it tends to stay there.

There's little risk when an infant falls asleep in the car in a properly positioned and secured car seat, with the straps correctly fastened, the authors note; and where you can see him or her. However, contrary to popular belief, car seats and other sitting and carrying devices are not designed for sleeping unsupervised. And using them for this can lead to serious consequences, including death.

The researchers looked at deaths of children younger than two years reported to the U.S. Consumer Product Safety Commission that occurred in sitting and carrying devices. They examined information on death certificates, reports from medical examiners and coroners, and interviews with family members and witnesses.

All but one of the deaths was attributed to suffocation. Two-thirds involved car seats, with strangulation from straps accounting for 52% of the car seat deaths. The remainder of deaths occurred in slings, swings, bouncers, and strollers. The time between when the infant was last seen alive to when they were discovered was as little as four minutes.

Partially unbuckling children is especially dangerous because it allows an infant enough freedom of movement to become tangled in the loose straps.

“Many parents use sitting or carrying devices not realizing that there are hazards when they do this, ” researcher Erich Batra, from the Penn State College of Medicine, said in a statement. Because reporting is voluntary, he and his colleagues from the U.S. Consumer Product Safety Commission and Children’s National Medical Center caution that these statistics should not be considered comprehensive. They offer no information on how often such deaths occur, but what they do show is that the problem exists.
ADVERTISEMENT
What Parents Should And Should Not Do

Car seats are not stable when used outside of a car and can topple over when not secured. Parents may also be tempted, for the infant’s comfort, to unfasten the restraints on car seats once the child is out of the car, assuming that the straps are no longer needed. But partially unbuckling children is especially dangerous because it allows an infant enough freedom of movement to become tangled in the loose straps.

The authors offer these tips to help parents use infant sitting and carrying devices safely:

The study appears in the Journal of Pediatrics.