Neil Wagner
Finally, a hospital gown that doesn't leave you exposed. Why did it take so long?

Those horrible, drafty hospital gowns may soon be a thing of the past. Henry Ford Hospital in Detroit has been testing a new gown that's fully closed in the back, yet still allows doctors quick access.

The redesigned hospital gown has been receiving rave reviews from both doctors and patients. It resembles a robe more than a traditional hospital gown, and should improve at least one aspect of anyone's hospital stay.

It's not exactly Armani, but it meets a lot more of a patient's basic needs than the traditional gown does.

The gown was designed by the Henry Ford Innovation Institute in collaboration with the College for Creative Studies. It features a slit in the back withs fabric overlapping at both ends, so the gown is only open when it needs to be open for doctor access.
ADVERTISEMENT 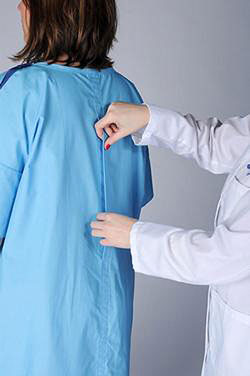 The front is double-breasted and is closed with snaps. Those annoying ties are gone. The new gown has thicker fabric than a traditional gown and is longer, so it covers more of a patient's body. Patients stay warmer and feel they can walk down the hall with dignity, even with the whole floor watching.

“A simple change can have a large impact on the patients’ stay at a hospital, ” said Michael Forbes, a product designer at the Henry Ford Innovation Institute and graduate of the College for Creative Studies (CCS). “By creating a hospital gown that is safe, stylish and comfortable, we’ve made the patient feel more at home, like they’re wearing their own garments. ” 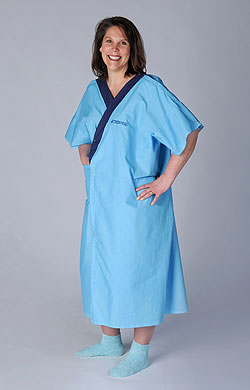 It's not exactly Armani, but it meets a lot more of a patient's basic needs than the traditional gown does. Many patients have asked why the gowns haven't been used sooner.

The cost of manufacturing the new gown is similar to that of current gowns. Plans are to license the design to an existing gown manufacturer, which would then produce and sell the gown nationally. The colors, navy on light blue, were chosen to coincide with Henry Ford Hospital's own colors. They can be easily changed for use in other hospitals.

Along with patient eye masks and earplugs, the gowns promise to make a stay in the hospital more civilized. The current skimpy design that many patients find chilling and undignified may become, hopefully, a thing of the past. Find more details here.