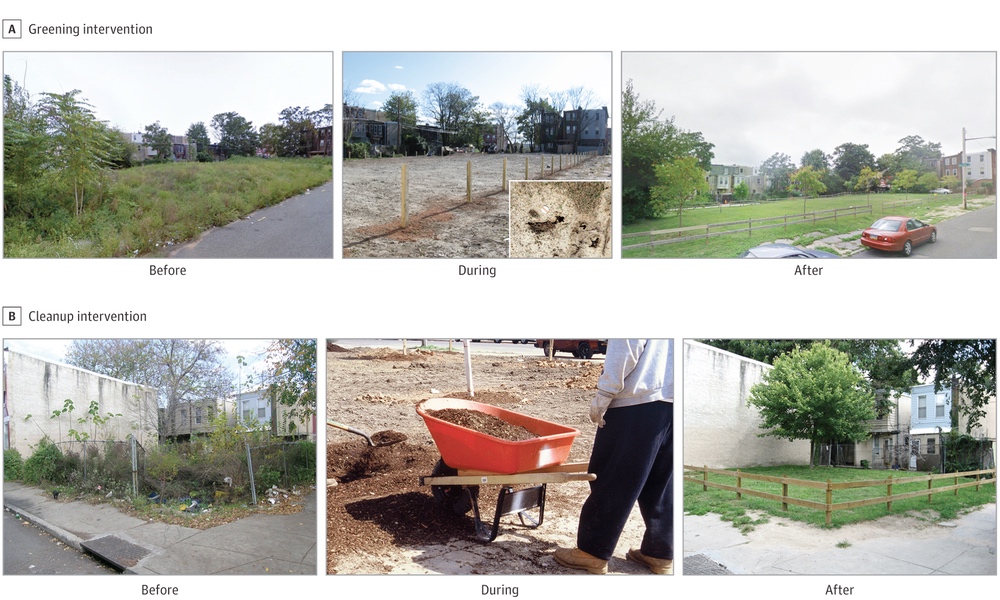 The crumbling environment in many urban neighborhoods carries with it a high cost to the mental health of residents. Vacant lots, trash and a lack of green spaces are unavoidable in many cities and a persistent source of stress in neighborhoods with few resources to make improvements. They also contribute to the high prevalence of anxiety and depression among residents.

Luckily, the reverse is also true: a neighborhood in good physical condition can positively affect residents’ mental health, and vacant lots offer a low-cost way to protect the mental health of urban dwellers. Planting grass and trees on vacant lots, greening these spaces, can improve health and reduce crime and stress. A University of Pennsylvania study offers what the authors say is the first experimental evidence to support this idea.

Making a vacant lot green is a simple and relatively low-cost way to turn an unhealthy environment into a healthy one, Eugenia South, lead author on the study, told TheDoctor in an email. “Where people live, and specifically the physical environment of their neighborhood, has an impact on their health.”
ADVERTISEMENT
South and her team looked at data from 342 people living near 110 clusters of 541 vacant lots in Philadelphia. People were randomly assigned to one of three study groups: a greening intervention; a trash cleanup intervention, involving regular removal of litter and debris; or a control group with no intervention. (The photos above show the kind of work that was done in the greening and cleanup conditions, but for privacy reasons are not of actual sites from the study.) Participants were surveyed about their mental health before and after the changes took place.

People can definitely help their community grow greener. If there is no organization in your neighborhood, you might reach out to the Pennsylvania Horticultural Society, which developed the intervention in Philadelphia and is willing to talk to communities and cities interested in its work, according to South, an assistant professor of emergency medicine at the University of Pennsylvania.

Green spaces have already been shown to protect residents' physical health, this research shows their value to mental health. Several ongoing studies are looking at the effect of greening vacant lots and how people can be encouraged to spend more time outdoors in green spaces to reap the health benefits. South sees green spaces as an adjunct treatment for depression. While spending time outdoors will never replace medication and talk therapy, it might improve outcomes when offered in conjunction with those treatments.