A New Way of Looking at Atherosclerosis


Atherosclerosis, which comes from the Greek words for "gruel" or "goo" and "hardening," is defined as the presence of atheromas, or lesions, on the inside walls of arteries. The lesions, also known as plaque, consist of fatty deposits and other substances.

What makes atherosclerosis particularly dangerous is that it seems to have a special attraction for the large important arteries — those that supply blood to the heart ("coronary") and brain ("cerebral"). When pieces of a plaque-filled lesion break off (rupture) from the inside wall of these large arteries, the fatty material flows downstream into smaller arteries that directly supply the heart and brain, where they become stuck, preventing blood rich in nutrients and oxygen from reaching these vital organs. If total blockage occurs, the result can be a heart attack or stroke.


What Causes Atherosclerosis?
Exactly how and why atherosclerosis occurs is not known for certain, although we are learning more and more about the processes involved. Most people are familiar with the various risk factors associated with the disease; these include high blood levels of LDL ("bad cholesterol") and a substance called homocysteine, hypertension, cigarette smoking, obesity and diabetes.

Recent research, however, suggests that the cause of atherosclerosis may lie in the body's immune system, perhaps as a response to injury caused by an unidentified infection. This raises the exciting possibility that some future treatment may be developed that targets the underlying infection or aspects of the immune system response.

So far, no one has been able to pinpoint the exact type of injury that begins atherogenesis. We do know, though, that the body's response to injury or infection ("inflammatory response") can become chronic, creating its own set of health problems.

Whatever its origin, there is little question that atherosclerosis starts with the formation of fatty patches or streaks in the inner lining of the arteries (endothelium). With the arrival of so-called "scavenger cells" (macrophages) and lymphocytes, a type of white blood cell, that move into the tissue behind the artery walls, production of growth factors is stimulated — smooth muscle cells build-up and connective tissue, a kind of scar tissue, is produced. The end result of this process is the formation of a fibro-lipid plaque that effectively narrows the artery and limits blood flow through the artery. 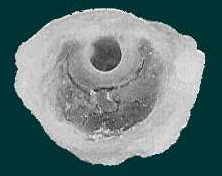 
What the Macrophages and T-Lymphocyte Do
The role of macrophages is to act as scavengers to remove what the body perceives as foreign substances. Once lodged in the inner lining of the artery (endothelium) they produce growth factors and cytokines, both of which are involved in the human immune response. These substances bring in more macrophages and cause the proliferation of smooth muscle cells. Part of the job of macrophages and smooth muscle cells is to produce connective tissue. Macrophages also produce collagen-degrading enzymes, which can cause the fibrous cap of the plaque to rupture, leading to possible blockage of blood flow in the artery.

Another member of the body's immune system, T-lymphocytes, have been shown to be present at all stages of atherosclerosis. Their presence provides further evidence of a connection to the immune or autoimmune response.


Clinical Evidence
Recent studies have found increased levels of other "immune system" substances (MCSF, IL-1b, IL-6 and CRP) in patients with coronary (heart) atherosclerosis as compared with healthy subjects. Indeed, the level of both MCSF and IL-1b in the bloodstream correlates closely with the extent of coronary artery disease.

Furthermore, large studies in patients with heart disease have found that those with high blood levels of other "immune system" substances — C-reactive protein, leukocytes and fibrinogen — are more likely to suffer further symptoms, including heart attack. The presence of these substances suggests that inflammatory processes interacting with or, perhaps, originating from atherosclerotic blood vessels may somehow cause or promote thrombosis, or blockage of the artery by a blood clot. Fibrinogen is the precursor of fibrin, the constituent of blood clots.

The Physicians' Health Study, which tracked a large group of initially healthy middle-aged male doctors for approximately 10 years, found that blood levels of two inflammatory markers were significantly higher in individuals who subsequently developed heart attack and stroke. These inflammatory markers may well indicate the presence of atherosclerosis at its earliest stages.


Risk Factors or Inflammatory Stimuli?
The well-known association between atherosclerosis and various risk factors may in fact support, rather than contradict the theory that the origins of the disease lie in the workings of the immune system. Rather than being causes in themselves, the evidence suggests that some or all of these factors may act to stimulate or enhance the underlying inflammatory process.


LDL
The so-called "bad cholesterol" seems to contribute to the formation of atherosclerotic lesions by binding to the surface of macrophages and smooth muscle cells attached to the artery wall. Studies have shown that lowering LDL concentrations in the blood can reverse atherosclerotic plaques in animals and humans and, thus, reduce the incidence of heart attack and death.


Homocysteine
This substance, found in the bloodstream, has been shown to promote the formation of plaques. Patients with severely high levels of homocysteine are much more likely to die prematurely of diseases related to atherosclerosis. Trials to investigate the possible benefits of reducing homocysteine levels with folic acid are currently under way.


Infectious agents
Studies have found that the presence of two germs, Chlamydia pneumoniae and Helicobacter pylori, as well as the herpes virus, Cytomegalovirus, is strongly associated with coronary artery disease.

Because these infections are so common in the general population, however, it is likely that if they do indeed contribute to atherogenesis in step with other genetic or environmental factors. Two small-scale trials on patients with coronary artery disease have shown that there may be some benefit from antimicrobial drug therapy. At this time, however, there is insufficient evidence to justify widespread use of these drugs to treat coronary artery disease.


Hypertension, smoking and diabetes
High blood pressure, whether caused by hypertension, tobacco-related toxins or some types of diabetes may interfere with endothelial cell function or promote the formation of plaques. Successful treatment or correction of these conditions can significantly reduce the risk of cardiovascular disease.


Conclusion
The more we learn about how the lesions of atherosclerosis are formed, the more connections we see to chronic inflammatory disease. Exactly what triggers the early stages of arterial inflammation remains a mystery and may well vary among individuals. Nevertheless, at the cellular level, we have enough evidence that suggests that the role played by inflammatory cytokines and growth factors may be very important. Treatments aimed at these parts of the inflammatory process may be a promising area to look for new, more effective treatments or methods of prevention.